KKR's Sunil Narine grabbed the purple cap in process with amazing figures of 4/22. All other bowlers - L Balaji (2/22), Jacques Kallis (2/17) and Sachithra Senanayake (1/17)  - ended with fine figures to keep the visiting side in check. 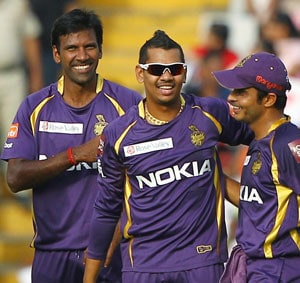 Kolkata Knight Riders kept their slim chances of making it to the Pepsi Indian Premier League 2013 playoffs alive with a five-wicket win over Royal Challengers Bangalore, who did their own ambitions no good, at the Jharkhand State Cricket Association stadium in Ranchi on Sunday (May 12). The star of Kolkata's win in the low-scoring match, with bat and ball, was Jacques Kallis, underlining his importance to Kolkata's plans again.

The only international match played at the venue, a One-Day International between India and England last year, was also a low-scoring affair and for Kolkata, it really was home away from home as their game plan is built around their slower bowlers. The ball often stopped on the batsmen and the Power Play overs yielded just 16 runs for the loss of Cheteshwar Pujara's wicket.

Virat Kohli hit a couple of boundaries, while Chris Gayle edged a four past slip and hit Ryan ten Doeschate for a straight six, but these were the exception rather than the rule. Gayle looked like he was biding his time, but the promised blitzkrieg never came. Kohli had played on to a Kallis delivery by then, and Gayle, with the total on 70 for 3, was stumped smartly by Manvinder Bisla off Sunil Narine. Gayle's 33 took 36 balls and that explained why the scoring rate hadn't crossed even six-an-over till that stage. It never did.

Even AB de Villiers didn't have it easy. He fell to Balaji, one delivery after hitting him over cover for a six, nicking an attempted reverse sweep to Bisla. His dismissal brought on huge cheers from the crowd with local boy Saurabh Tiwary walking in, but Narine made his stay in the middle a short one, catching him plumb in front for just one run. Overall, the Kolkata bowlers, led by Narine (4 for 22), Kallis (2 for 17) and Balaji (2 for 22), were exemplary in the way they exploited the conditions, keeping Bangalore down to 115 for 9.

Despite the pitch conditions not improving, it shouldn't have been a difficult chase for Kolkata with Bangalore packing their side with medium pacers, but for that, they needed one batsman to bat long and for a couple of others to put in the 20-run cameos.

It wasn't to be Bisla or Gambhir, the opening batsmen. Bisla fell in the first over, a wicket maiden from Ravi Rampaul, and though Gambhir hit three consecutive boundaries in a Mithun over, he too fell early, caught at first slip off Vinay Kumar. But the 31-run stand between Gambhir and Kallis did put Kolkata on the right path.

Yusuf Pathan's 16-ball 18, before he was out lbw to Murali Kartik, was useful, but the Kolkata innings was built around Kallis. Before he got out at a tricky time, with 20 required in just over three overs, Kallis's 45-ball 41 was just the sort of innings Kolkata needed. Kallis's dismissal was followed by Manoj Tiwary's, who played a Vinay full toss straight to Kohli at cover after a good contribution of 24 in 27 balls.

A twist in the tale looked on the cards but with the target being low, Kolkata scraped home with four balls to spare when ten Doeschate hit Vinay for a straight four. The win took Kolkata to 12 points while Bangalore remained on 16 points; both teams have two games in hand.