Virat Kohli out for 99, misses hat-trick of tons at Vizag

Batting on 99, India's run-machine Virat Kohli went for a hook against Ravi Rampaul and was sharply caught by Jason Holder at fine-leg resulting in dead silence at the Dr. Y.S. Rajasekhara Reddy ACA-VDCA cricket stadium. 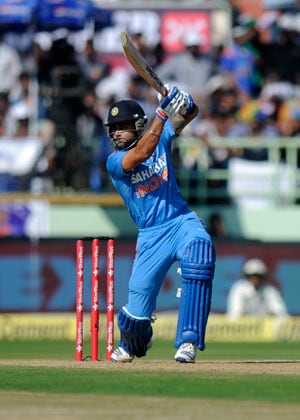 Riding his brilliant run of form this year, Virat Kohli looked all set to complete his 18th ODI century, but a hook shot off Ravi Rampaul that went awry put an end to yet another heroic knock. Batting at his usual No. 3 position, the 25-year-old hit 9 fours, eventually finished with 99 off 100 balls in the second one-day international in Visakhapatnam. (Match Scorecard | Live Blog)

Needing a single for what would have been his 5th hundred this year, Kohli, who was batting with ease milking the West Indian bowlers, went for an impulsive hook and was brilliantly caught by a lunging 6-foot 7-inch Jason Holder at the fine-leg fence. As Holder completed a catch, the Indian dressing room looked stunned and the capacity crowd - 25,000 -at the Dr. Y.S. Rajasekhara Reddy ACA-VDCA cricket stadium went into pin-drop silence.

The stylish right-hander could have completed a hat-trick of tons at Vizag after scoring a 118 against Australia in 2010 and a 117 against the Caribbean side in 2011.

Kohli, who became the joint-fastest to complete 5000 ODI runs in the previous match on Thursday, seemed to be in no mood to give in throughout his knock. The manner in which Kohli switched gears to propel India's innings was admirable.

The Delhi batsman had a 69-run partnership for the third wicket with Yuvraj Singh. Even after he lost Yuvraj's company, Kohli's approach to the innings hardly changed as he kept pelting seamers and spinners with equal disdain. He then dominated a 65-run stand with Suresh Raina, scoring 41 in the 4th wicket partnership. For someone whose average is half when India bat first (37.56 approximately) than when the team chases (65.54 approximately), he looked determined to post a huge target for the tourists at Vizag.

The No.1 batsman in current ODI rankings, Kohli is also the highest run-getter this season - a list which has three Indians in the top-six. With Rohit Sharma and Shikhar Dhawan also in ripe form, the trio led by the team's vice-captain has given the Men in Blue a lethal edge against opponents.

Comments
Topics mentioned in this article
Cricket West Indies vs India 2011 Virat Kohli Ravi Rampaul West Indies Tri Series 2013 India Cricket Team West Indies Cricket Team India vs West Indies 2013-14
Get the latest updates on IPL Auction 2023 and check out  IPL 2023 and Live Cricket Score. Like us on Facebook or follow us on Twitter for more sports updates. You can also download the NDTV Cricket app for Android or iOS.