Shikhar Dhawan has posted six international centuries in 2013, the highest tally by any player this year. His feat of recording five ODIs hundreds is the most by any batsman in 2013. 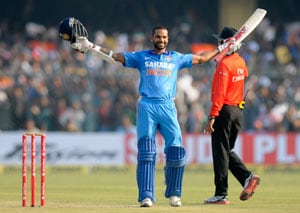 Statistical Highlights from the 3rd ODI between India and West Indies in Kanpur:

# India have won six successive series for the second time in ODIs - the first instance between August 2008 and September 2009.

# Kieran Powell's fifth fifty in ODIs is his second against India.

# Kieran Powell's average of 45.90 is the highest by a West Indian batsman in ODIs this year.

# Powell and Samuels were involved in a stand of 117 for the second wickekt - West Indies' highest for any wicket at Green Park in ODIs, eclipsing the 115 for the first wicket between Phil Simmons and Stuart Williams vs India on October 30, 1994.

# Darren Bravo's 15th fifty in ODIs is his sixth vs India.

# Bravo has recorded three consecutive fifties in the series - 59 at Kochi; 50 at Visakhapatnam and 51 not out at Kanpur - the second West Indian to register three fifties in a bilateral series since 2011.

# The last West Indian player to post three fifties in an ODI series was Ramnaresh Sarwan - vs India in 2011.

# Shikhar Dhawan has recorded his fifth ODI hundred in his 28th innings, emulating Upul Tharanga's feat for Sri Lanka. Both share a record for registering the first five ODI centuries in least number of innings (28).

# Dhawan has posted six international centuries this year - the highest tally by any player this year. His feat of recording five ODIs hundreds is the most by any batsman in 2013.

# Dhawan has posted two hundreds vs West Indies and one each vs Australia, Zimbabwe and South Africa in ODIs.

# Dhawan is averaging 55.45 in a winning cause in ODIs - his aggregate being 1109 in 21 innings, including five hundreds and five fifties.

# India have won all ODIs when Dhawan has scored fifty-plus innings.

# Dhawan's 73-ball century is his quickest in ODIs.

# Dhawan has got his third Man of the Match award in ODIs - all this year - one each vs South Africa, West Indies and Zimbabwe.

# Mahendra Singh Dhoni is the third batsman to remain unbeaten 50 times in a winning cause, joining Michael Bevan (53) and Steve Waugh (50).

# Dhoni's outstanding average of 74.57 is the highest amongst the batsmen with atleast 1000 runs in a winning cause in ODIs - his tally being 4773 runs in 134 matches.

# Twenty two international hundreds have been made for India - the highest by any team this year, bettering Australia's tally of 21.

# Virat Kohli has been adjudged the Player of the series for the third time in ODIs.

# Eight fifty-plus scores have been recorded by the West Indian batsmen - the most by them in a three-ODI series.

# Dhawan and Yuvraj were associated in a 129-run stand - the highest partnership for the third wicket at Green Park, Kanpur.
(Stats: Rajesh Kumar)

Comments
Topics mentioned in this article
Cricket West Indies Cricket Team India Cricket Team West Indies Tri Series 2013 Shikhar Dhawan India vs West Indies 2013-14
Get the latest updates on Fifa Worldcup 2022 and check out  Fifa World Cup Schedule, Stats and Live Cricket Score. Like us on Facebook or follow us on Twitter for more sports updates. You can also download the NDTV Cricket app for Android or iOS.