Runs will come, have to handle the tough times: Yuvraj Singh 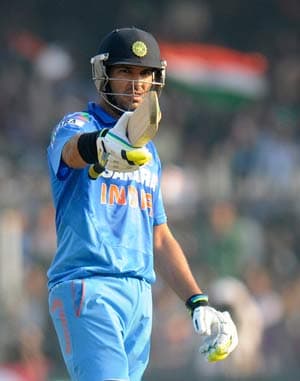 Out-of-form and under pressure to perform, Yuvraj Singh came up trumps in the third and final ODI versus West Indies at Green Park Stadium in Kanpur on Wednesday. The middle-order batsman scored 55 -- his 51st ODI half-century -- as India eased to a five-wicket win. Speaking after the game, Yuvraj said he always believed that the runs would come. "I've been batting well but not getting enough runs. The runs are going to come, you have to make sure you are there at the tough times. It's all about gaining momentum," the 31-year-old said.

Yuvraj, who was the Man of the Series in the 2011 World Cup that India won, added that it was a challenge to come to terms with the Kanpur wicket in the initial stages. "The wicket was a bit two-paced at the start but it got easier as the game progressed." It is Yuvraj's experience in the middle order that Team India is banking on.

Yuvraj and Suresh Raina have come under severe criticism for their performances off-late and their positions in the playing XI are under threat with Ajinkya Rahane and Ambati Rayudu waiting in the wings. However, Yuvraj believes his fellow left-hander will come good. "It was good to see Raina spending some time in the middle." It's clear that both Raina and Yuvraj will have to mix caution and aggression in the right doses. (Also read: How Dhawan slammed his way to a ton)

Against the West Indies and in the ODI series against Australia, Yuvraj has been outshone by lesser experienced teammates Virat Kohli, Shikhar Dhawan and Rohit Sharma. However, he has nothing but words of praise for the trio. "Virat and Rohit are doing very well and batting splendidly. Shikhar was just brilliant today and I thought I should spend time with him in the middle. He has scored lots of runs in domestic cricket and has matured," Yuvraj said.

This was just Yuvraj's second ODI fifty since the 2011 World Cup in 17 matches. His only other half century came against England in Rajkot on January 11, 2013. Prior to the third ODI, India skipper MS Dhoni had given his backing and support to the senior cricketer and Yuvraj seems to have repaid the faith. With tougher tests in South Africa to come, Yuvraj seems in prime form to take up bigger challenges. The pugnacious left-hander remains in the scheme of things looking ahead into the 2015 World Cup Down Under.

Comments
Topics mentioned in this article
Cricket Yuvraj Singh Anil Kumble Gary Kirsten West Indies Tri Series 2013 India Cricket Team West Indies Cricket Team India vs West Indies 2013-14
Get the latest updates on IPL Auction 2023 and check out  IPL 2023 and Live Cricket Score. Like us on Facebook or follow us on Twitter for more sports updates. You can also download the NDTV Cricket app for Android or iOS.