Want to continue with this good habit of scoring tons, says Shikhar Dhawan

Shikhar Dhawan smashed an attacking 119 off only 95 balls, his fifth ODI hundred, to clinch the ODI series with a a comfortable six-wicket win over West Indies in the third and final match at the Green Park here on Wednesday. Since his comeback to the Indian side, he has hit six international tons including his blazing 187 on Test debut at Mohali. 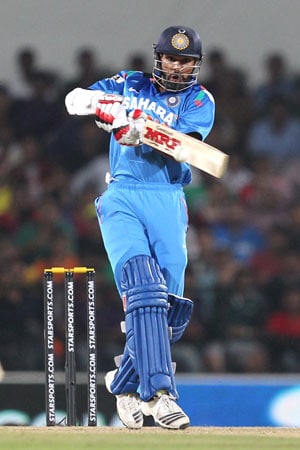 Shikhar Dhawan has been in the form of his life since his comeback into the Indian team last March and the dashing opener wants to continue with the "good habit" of scoring centuries and winning a lot more matches for India across all formats.

Dhawan smashed an attacking 119 off only 95 balls, his fifth ODI hundred, to clinch the ODI series with a a comfortable six-wicket win over West Indies in the third and final match at the Green Park here on Wednesday. Since his comeback to the Indian side, he has hit six international tons including his blazing 187 on Test debut at Mohali.

"I am really thankful to God that he has given me such a beautiful year. I am really happy that I have been scoring lots of centuries. It's a good habit and I want to continue this habit by winning lots of matches for my team," an elated Dhawan said at the post-match press conference after India clinched the ODI series with 23 balls to spare.

For Dhawan, the most satisfying aspect of his century is that it has helped the team win the match comfortably.

"I am very happy that I made a century and the team won. I have been getting starts in the last 2-3 matches but was not being able to convert them into big scores. It couldn't have been better that I scored a century in the series deciding match," Dhawan said.

India next assignment is the tough tour to South Africa starting next week and Dhawan is confident of his good showing in the Rainbow nation.

"It's always good to end a home series on a high note. This century is going to give me lot of confidence when I travel to South Africa." A few months back, Dhawan went to South Africa with the India A team and scored a smashing 248 against South Africa A in a List A game.

Giving special importance to the series victory over the struggling West Indies, Dhawan said winning now has become a habit for the Indian team.

"It's a good win for us. We have been winning tournaments on a trot now. We want to continue the momentum and win as many tournaments we can," he said.

He also had words of appreciation for Yuvraj Singh, who returned to form on Wednesday with a fighting 55.

"Yuvi Paaji was playing well when he came into bat today. He played a beautiful knock and we both had a good partnership. For me, it was amazing to bat with Yuvi paaji because I have learnt lots of things from him and look up to him," Dhawan said.

Comments
Topics mentioned in this article
Cricket Shikhar Dhawan West Indies Tri Series 2013 India Cricket Team West Indies Cricket Team India vs West Indies 2013-14
Get the latest updates on SA vs IND 2021-22, check out the Schedule and Live Score . Like us on Facebook or follow us on Twitter for more sports updates. You can also download the NDTV Cricket app for Android or iOS.