Lost a great opportunity to win a series in India, says Dwayne Bravo

West Indies lost the three-ODI series 1-2 after going down by five wickets in the third and final One-dayer here at the Green Park stadium. 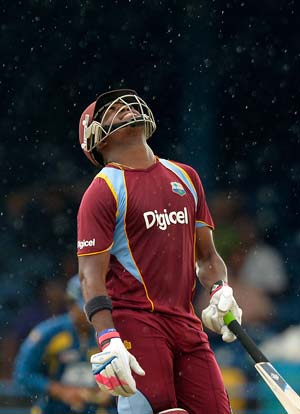 West Indies skipper Dwayne Bravo on Wednesday said it was due his bowlers' inconsistent performance that the team's lost a great opportunity to register a series win against India in India.

West Indies lost the three-ODI series 1-2 after going down by five wickets in the third and final One-dayer here at the Green Park stadium.

"The average score on this wicket is 230-235 but we did really well to get to 260-plus. But the wicket did get better to bat in the afternoon and the strong Indian line-up got a very good start. We were outplayed with the bat and we need to give credit where it is due," Bravo said at the post-match press conference.

"At times we were inconsistent with the ball and we paid for it. We did a lot of things right but unfortunately just didn't win the game. We are disappointed because this was our best opportunity to win a series in India. We just have to regroup and keep believing," he insisted.

With today's defeat, West Indies winded up a forgettable tour to India, who humiliated the visitors by innings defeat in the two Tests that preceded the ODI series.

It was a marked improved performance today though from the West Indies batting line-up, which has struggled in the entire series.

Kieran Powell (70) and Marlon Samuels (71) played fine knocks before throwing away their wickets with India off-spinner Ravichandran Ashwin being the beneficiary, and Bravo termed the dismissals as "turning point" of the match and also pointed out the flaws and positives to take home from the series.

"Samuels and Powell had a fantastic partnership (117 runs) but unfortunately none of them could carry on to score a big one. Samuels got out to a good ball from Ashwin, which was the turning point. I would have loved our batsmen to consolidate on their starts but as long as they keep showing signs of form, I am sure big score will follow," he said. Bravo reiterated that his batsmen need to take a cue from their Indian counterparts on how to score big.

"The difference between us and India is that our batsmen get starts and get out, whereas one or two Indian batsmen always bat through to either set a big target or until India wins," he said referring to Shikhar Dhawan's match-winning 95-ball 119 in today's match.

"That's what our batsmen need to learn. The talent is there and now we just have to get our attitude and mindset right," Bravo added.

Bravo, who himself had a disappointing series with both bat and the ball, admitted that he let his team down.

"I had a very bad series and I have to improve my performance as the captain of the team. One of my roles in the team is to finish off games and if I had done that today, I'd have put my team in a very good position. But in this series I let my team down.

"However, I will not let that get better of me and try to come as an improved player in the next series," Bravo said.

Comments
Topics mentioned in this article
Cricket West Indies Cricket Team India Cricket Team West Indies Tri Series 2013 Dwayne Bravo India vs West Indies 2013-14
Get the latest updates on Fifa Worldcup 2022 and check out  Fifa World Cup Schedule, Stats and Live Cricket Score. Like us on Facebook or follow us on Twitter for more sports updates. You can also download the NDTV Cricket app for Android or iOS.