Tim Southee and Trent Boult combined to take seven wickets as New Zealand dismissed the West Indies for 213 at the University Oval in reply to their first innings of 609-9 declared. Kirk Edwards scored 59 while Darren Bravo was unbeaten on 72 at stumps. 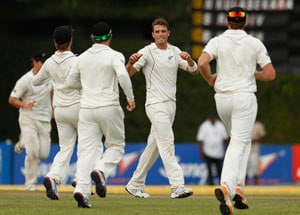 Kirk Edwards and Darren Bravo made half centuries in a 117-run second wicket partnership which helped the West Indies to 168-2 in their second innings at stumps on Thursday after they followed on 396 runs behind New Zealand on the third day of the first Test. (Scorecard)

Tim Southee and Trent Boult shared seven wickets as New Zealand dismissed the tourists for 213 in reply to its first innings of 609-9 declared and Boult made an early breakthrough in the second innings after captain Brendon McCullum enforced the follow on.

After losing an early wicket, Edwards (59) and Bravo (40) stayed together through most of the final session, in a much-needed partnership but the West Indies are still 228 runs off making New Zealand bat again.

The tourists resumed Thursday at 67-2, and Southee (4-52) took three wickets before lunch to stop the West Indies' top order from mounting a serious bid for the follow on target.

Bravo (40) set in motion the decline when he was out in only the fourth over of the day. He flashed at a ball from Southee well wide of off stump, an almost epidemic failing of the West Indies' batsman, and he was caught by McCullum, diving low and to his right at gully.

Shivnarine Chanderpaul provided almost single-handed resistance with a 76, posting his 62nd half century in his 151st Test and surpassing 11,000 Test runs.

Chanderpaul was out lbw, playing no shot to a ball from Boult which pitched outside off and cut back, striking him high on the pad. He challenged the decision but the technology showed the ball would have hit the bails.

When he was out, the fight went out of the tourists and New Zealand wrapped up their first innings less than an hour into the second session.

Captain Darren Sammy was 27 not out when the West Indies' innings ended. He batted with a hamstring strain suffered while bowling on the first day and could do little more than hobble between wickets, reaching his total from 22 balls with six fours.

His injury led to the comical run out of Tino Best for 0 when Sammy, after struggling to take singles, suddenly attempted a two and left his partner hopelessly stranded.

In the first dismissal of the second innings. Boult found the edge of Kieran Powell's bat when the opener was 14, the West Indies were 18, and Southee took the catch at slip.

"It would have been nice to have maybe one or two more wickets on that total," Boult said.

"It was all go this morning and it was nice to run through them in a way but we always knew they were going to put up a more resilient fight this afternoon and it's what they've done.