After misspelling Sachin Tendulkar's name in a giant billboard a day earlier, Eden officials were left red-faced once again while greeting his wife Anjali. 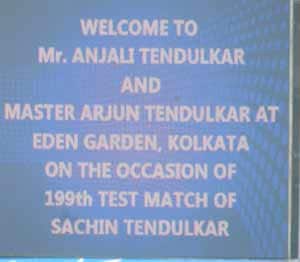 After having made a goof-up in spelling Sachin Tendulkar's name, the Cricket Association of Bengal (CAB) were in for another embarrassment on Wednesday when they addressed the batting legend's wife as 'Mr' Anjali in the welcome message on the giant electronic scoreboard.

The CAB's second goof-up came in as many days when the giant display at the High Court end kept on flashing 'Welcome Mr Anjali Tendulkar and Master Arjun Tendulkar' during' the lunch break on the opening day of the first cricket Test between India and West Indies.

As Anjali along with son Arjun got into the president's box around the lunch break, the giant screen flashed the wrong message and it was only after a few minutes that the mistake was realised and corrected, but by then the damage was done.

The CAB, which had already drawn flak for its over-enthusiastic preparations for Tendulkar's 199th Test, on Tuesday, had misspelt the senior batsman's name as "Sachine" in a giant billboard. (Read about the debacle here)

The CAB had then put the entire blame on a private agency.

The CAB, however, apologised for the goof-up. "It's really unfortunate that something or other is happening everyday. We're helpless now as it's being looked after by a private agency.

"However, we're committed to take action against the agency after the match gets over. We apologise for the inconvenience it caused," an apologetic CAB joint secretary Subir Ganguly said on Wednesday. 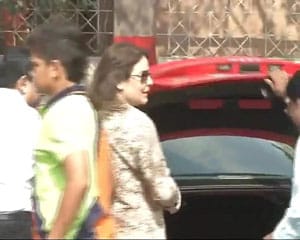 The CAB treasurer Biswarup Dey in turn had criticised Dhoni for making an issue out of the spelling mistake.

"He could have told us about the mistake. But it's not in the interest of captain to see to this," Dey had said.

While 80 school children wearing T-shirts with Tendulkar's image and 199 written on the back lined up till the dressing room to greet him when he disembarked the team bus, Tendulkar remained calm and went about the routine in a casual manner.

Comments
Topics mentioned in this article
West Indies Cricket Team India Cricket Team Cricket Sachin Ramesh Tendulkar West Indies vs India 2011 Anjali Tendulkar
Get the latest updates on IPL Auction 2023 and check out  IPL 2023 and Live Cricket Score. Like us on Facebook or follow us on Twitter for more sports updates. You can also download the NDTV Cricket app for Android or iOS.