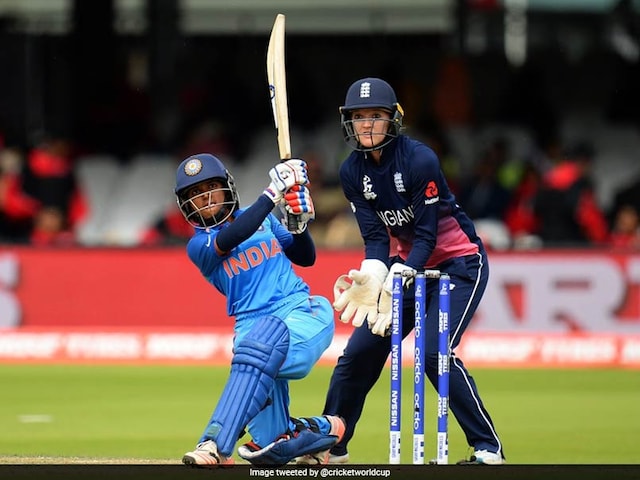 A spirited 86 from Punam Raut and 51 from Harmanpreet Kaur helped India get close to England's total of 228/7 but fell just nine runs short in the ICC Women's World Cup final at Lord's on Sunday. Underdogs in the event, India were up against tournament favourites and hosts England in the summit clash but they refused to give up without a fight. Despite losing opener Smriti Mandhana early and captain Mithali Raj for 17, Punam and Harmanpreet got India back in the match with a 95-run partnership. After Punam's departure, Veda Krishnamurthy's 35 kept India in the hunt. However, England held their nerves and picked up wickets at regular intervals as the Indian lower-order failed to come up with the goods. With this win, England won their fourth World Cup title. (SCORECARD)

21:51 IST: Four! Deepti Sharma comes down the track and slams the ball for a boundary straight down the ground.

21:47 IST: OUT!! Looking to go big, Veda miscues the hit and Sciver takes a comfortable catch. India are crumbling down under pressure. India 200/6 in 44.4 overs. Two new batters for India in the middle.

21:45 IST: England are right back in the game with two quick wickets.

21:39 IST: Four! Comes down the track and slaps the ball over covers for a boundary.

21:38 IST: Sushma Verma is the new batter in, joins Veda in the middle.

21:36 IST: Out!! Shrubsole gets the big breakthrough, dismisses Punam Raut for 86.

WICKET! Punam Raut OUT for 86! IS this when England pull themselves back in front? India 191/4 with 43 balls remaining! #ENGvIND #WWC17 pic.twitter.com/EijgySXHOT

21:34 IST: Four! Width from Shrubsole and Krishnamurthy gets the ball away for a boundary.

21:18 IST: A good over form Laura Marsh at a crucial time, concedes just one run.

21:10 IST: Four! Short from Marsh, Punam cuts the ball for a boundary.

21:08 IST: Four! Veda, shimmies down the wicket, drives the ball through the covers.

21:04 IST: Safe! Punam Raut survives a scare. Comes down the track, misses and the wicket-keeper fails to collect the ball.

21:03 IST: Four!! Veda gets off the mark with a boundary straight down the ground.

20:48 IST: Four! Raut making room for herself, goes inside out, and lofts Alex Hartley over covers for a boundary.

This is a big innings from Punam Raut and her teammates certainly appreciate it! #ENGvIND #WWC17 pic.twitter.com/T3ADW9Dneh

FIFTY! It's a 10th ODI half-century for the India opener Punam Raut off 75 balls!#ENGvIND #WWC17 pic.twitter.com/a8NOIVkxqZ

20:37 IST: Four! Slower ball from Sciver, Harmanpreet edges the ball for a boundary down the leg side.

20:31 IST: Four! Short from Sciver, Harman pulls it away for a boundary.

20:23 IST: After 25 overs, India 92/2. Harmanpreet and Punam edging closer to their individual half-centuries.

20:18 IST: Six!! Down on one knee, Harmanpreet dispatches Alex Hartley for a huge maximum.

20:14 IST: England are doing a good job with their bowling, not allowing the opposition to free their arms.

20:06 IST: Six!! Harmanpreet dances down the wicket and smokes the ball for a huge maximum.

19:54 IST: Time for drinks! India would like to build a partnership and not give in to the pressure of a big match.

19:50 IST: Good over from Jenny Gunn, bowls her second maiden over in her four overs.

19:45 IST: Four! Harmanpreet comes down the track and hits the ball over mid-on.

Good news for @Tammy_Beaumont - #MithaliRaj walks back to the pavillion on 409 tournament runs - one run behind the #WWC17 top scorer! pic.twitter.com/yCxBGx4qnt

19:31 IST: Four! Length delivery from Sciver, Mithali guides the ball through the off-side.

19:26 IST: Jenny Gunn is introduced into the bowling attack.

19:25 IST: Solid start from Sciver as she bowls a maiden.

19:23 IST: Natalie Sciver is introduced in the attack.

19:16 IST: Four! Low full toss on the pads from Brunt, Mithali guides the ball away on the leg side.

19:10 IST: Four! Short and wide from Brunt, Mithali slams the ball for her first boundary.

19:06 IST: Four! Punam hits the ball straight over the bowler's head, the first boundary of the Indian innings.

19:00 IST: Brilliant over from Shrubsole, concedes five runs and takes a wicket.

18:58 IST: Bowled! Shrubsole strikes for England, sends Smriti Mandhana back to the pavilion for a duck. India 5/1 in 1.4 overs.

18:53 IST: Brilliant over from Brunt, concedes just a run. India 1/0 after the first over.

18:49 IST: Hello and welcome back to second innings of the final match of Women's World Cup between India and England.

18:20 IST: Excellent over from Deepti so far. 5 runs off first four balls.

18:13 IST: FOUR! Gunn smashes Shikha Pandey between deep mid wicket and long on for a boundary. What a powerful shot from her. England 207/7 in 47.4 overs.

17:53 IST: Brilliant bowling from Rajeshwari Gayakwad. She concedes just 5 runs off her eighth over. England 179/6 in 43 overs.

17:50 IST: Brunt smashes the ball towards square leg. Catch is the call. The ball lands in no man's land. Brilliant effort from Smriti Mandhana.

WICKET! This is a big one, and Sciver has gone for 51! Trapped lbw by Goswami and she's got her third! England 164/6 #ENGvIND #WWC17 pic.twitter.com/8knwPKHYzx

17:31 IST: FOUR! Katherine Brunt comes forward and sends Shikha Pandey towards long off for a boundary. Excellent shot from her. England 164/5 in 37 overs .

50 off 65 balls for @natsciver - what a key innings this is for @englandcricket!

17:28 IST: FIFTY! Natalie Sciver brings up her half-century off 65 balls. Brilliant innings from her.

17:21 IST: A big mix up between the England pair. Verma misses the stumps. Another opportunity missed by the Indian team.

Two wickets in two balls for Jhulan Goswami! Will we see a #WWC17 trick? pic.twitter.com/DZGomBgYfb

17:14 IST: Jhulan Goswami is on hat-trick. A loud cheer from the crowd.

17:02 IST: A big opportunity here. Sciver gets a top edge off Jhulan but the ball lands in no man's zone.

Half way through England's innings and they're 104/3... but rain is starting to fall at Lord's... #ENGvIND #WWC17 pic.twitter.com/quUhoyAkm3

16:32 IST: Harmanpreet Kaur comes into the attack. A loud cheer for her.

WICKET! #HeatherKnight goes for just one! lbw to Poonam Yadav, not given at first but successfully reviewed! England 63/3 #ENGvIND #WWC17 pic.twitter.com/ZF6jXqYElj

15:57 IST: Beaumont makes room and sends Rajeshwari towards square of the wicket. What a timing from her. England 59/1 in 14 overs.

15:38 IST: A loud LBW appeal from Jhulan Goswai. Upmire has raised his finger. Wait! Winfield has asked for a review. Replay shows she is NOT OUT. Disappointment for India.

15:21 IST: FOUR! What a timing from Beaumont. She leans forward and sends Shikha Pandey towards sweeper covers.

15:14 IST: FOUR! Beaumont sends Jhulan towards square of the wicket. Perfect timing from her. England 15/0 in 3 overs.

The whole of Lord's joins in applause in memory of the late Rachael Heyhoe Flint. #WWC17 pic.twitter.com/KC1zqSzYYP

15:02 IST:  Winfield and Beaumont are at the crease. Jhulan Goswami will open the attack for India. Here we go

14:53 IST: Both the teams have arrived for the national anthems. What a moment at Lord's. Loud cheer from the crowd.

Out come the players for the national anthems! #WWC17 pic.twitter.com/HLMAiuhXHh

14:37 IST: MCC has allowed drums and flags for England vs India final at Lord's.

The whole nation is behind and rooting for you #TeamIndia . It's a special day so enjoy every moment @BCCIWomen #WWC17Final

14:15 IST: Overall, the two countries have played 62 ODIs against each other. India have won 26, while England have emerged victorious 34 times and two matches resulted in no result.

14:05 IST: Since the inception of the Women's World Cup in 1973, India and England have met on 10 occasions. The England team leads the head-to-head record 6-4.

13:40 IST: On paper, three-time title winners England will be the favourites but India's performance in the tournament, especially knocking out Australia, has made them the team to watch.

13:25 IST: This will be India's second World Cup final, having reached the summit clash in 2005 where they lost to Australia at Centurion.

31:22 IST: On a high after a sensational semi-final win against world beaters Australia, the India are all set to script history when they take on three-time winners England.

13:20 IST: Hello and welcome to the LIVE updates from the ICC Women's World Cup 2017 final between India and England at Lord's.

Though England hold a numerical advantage of having beaten India six out the 10 times the teams have met in the World Cup, one can't discount India's recent run in the tournament.

While Mithali crossed the 6000-run mark and also became the highest run-scorer in women's ODIs, Ekta Bisht and Rajeshwari Gayakwad's five-wicket hauls against Pakistan and New Zealand, respectively, have helped India's results immensely. While Smriti Mandhana's early knocks of 90 against England and a century against the West Indies propelled India's first two wins, she's failed to replicate the form since. However, the name on everyone's lips at the moment is that of Harmanpreet Kaur, whose stunning unbeaten 171 outclassed former champions Australia in the semi-finals. India need to keep the winning momentum going to be able to lift their maiden World Cup. If they win, they'll only become the fourth nation to ever win the World Cup.