ICC U-19 World Cup, Semi-Final: India defeated Australia by 96 runs to reach the final, where they will face England. 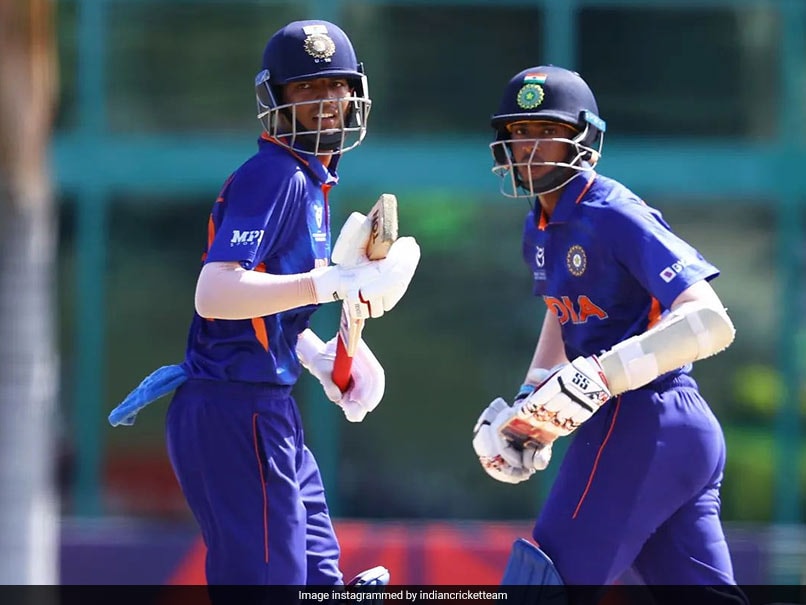 Skipper Yash Dhull gave a glimpse of his rare talent with a well-paced hundred as powerhouse India reached their fourth consecutive U-19 World Cup final with an emphatic 96-run win over Australia on Wednesday. Dhull struck a sublime 110 in as many balls and shared a game-changing 204-run stand with his deputy Shaik Rasheed (94 off 108 balls) to fire India to a formidable 290 for five after opting to bat. Indian bowlers then performed their roles to perfection to bowl Australia out for 194 in 41.5 overs. Lachlan Shaw's fine 51 came too late in the day for Australia.

Pacers Rajvardhan Hangargekar (0/26) and Ravi Kumar (2/37) were impressive in the first powerplay before spinners Nishant Sindhu (2/25), Vicky Ostwal (3/42) and Kaushal Tambe (1/32) dominated the opposition in the middle overs.

The professional bowling performance came after remarkably mature knocks from Dhulll and Rasheed who was unfortunate to miss out on a hundred.

Record four-time champions India face England in the final on Saturday and will be aiming to extend their dominance in the competition.

Dhull became the third Indian captain to hit a hundred in the tournament history after the illustrious Virat Kohli (2008) and the prodigious Unmukt Chand (2012), who also hail from Delhi.

India, the most successful team in tournament history, were hit by COVID-19 at the start of the competition, losing the likes of Dhull and Rasheed for two games but the depth in the squad ensured that they sailed to the knock-outs. Chasing a record target, Australia lost their in-form opener Teague Wyllie cheaply with Ravi Kumar trapping him in front off his first legitimate ball with a late inswinger into the right-hander.

Campbell Kellaway (30) and Corey Miller (38) forged a fluent 68-run stand before perishing in a space of six balls, leaving Australia at 73 for three.

Left-arm spinner Ostwal took a return catch for his second wicket to make it 119 for six in 30 overs, shutting the door on the opposition. Dhull was not just impressive with the bat but also his captaincy. He introduced part-time offie Raghuvanshi ahead of left-arm spinners. Raghuvanshi delivered the breakthrough by trapping Miller.

Earlier, India opted to put runs on the board after wining the toss, knowing it wasn't the easiest of pitches to bat on.

Australian pacers bowled well in the opening powerplay and the fact that Indian openers Angkrish Raghuvanshi (6 off 30) and Harnoor Singh (16 off 30) were also overtly cautious, helped them build pressure.

William Salzmann rocked Raghuvanshi's off-stump with a beauty that straightened after pitching.

Harnoor, who has not met the high expectations he set for himself, tried to pull a rising ball on leg stump from Tobia Snell only to glove it back to the wicketkeeper, leaving India at 37 for two in the 13th over.

India's two best batters, Dhull and Rasheed, then got together to lift the team out of a spot of bother. Playing only their third game of the tournament after missing two due to COVID-19, Rasheed and Dhull showed maturity beyond their age to build the innings.

Dhull got a lot of runs square and behind the square with deft late-cuts off spinners being one of his pet shots.

Rasheed, whose first boundary was an aerial straight drive, ended up with eight fours and a six.

The straight six he hit late in his innings off Jack Nisbet took him into the 90s. His punch shot through the cover off Salzmann was the most attractive shot he played.

The highly rated Dhull played another sublime knock. The pitch was on the slower side but he rotated the strike at ease before accelerating to pick boundaries at will, collecting 10 fours and a six in total.

He got to three figures with a two in the 45th over and next ball was a pull shot off Tom Whitney for the second six of the innings.

After Dhull's departure, Rasheed could not get to a deserving hundred after being caught at backward point off Nisbet.

Australia were sloppy in the field through the innings. Rasheed was dropped on 24 and missed an easy run out chance of Dhull who was batting on 74.

With two set batters gone in quick succession, the flow of the innings was slightly disrupted before Nishant Sindhu (12 not out off 10), Dinesh Bana (20 not out off 4 balls) and Rajvardhan Hangagekar (13 off 10) came up with the big shots in the death overs.

Australia leaked as many as 108 runs in the last 10 overs with the 50th over bowled by Tom Whitney going for 27.

Australia U19 Yash Dhull Shaik Rasheed Vicky Ostwal ICC Under 19 World Cup 2022 India Under-19 vs Australia Under-19, 2nd Semi-Final Cricket
Get the latest updates on IPL Auction 2023 and check out  IPL 2023 and Live Cricket Score. Like us on Facebook or follow us on Twitter for more sports updates. You can also download the NDTV Cricket app for Android or iOS.