India (220/2) reached the target with eight wickets in hand and 11.1 overs to spare as they completely outclassed the Australians. 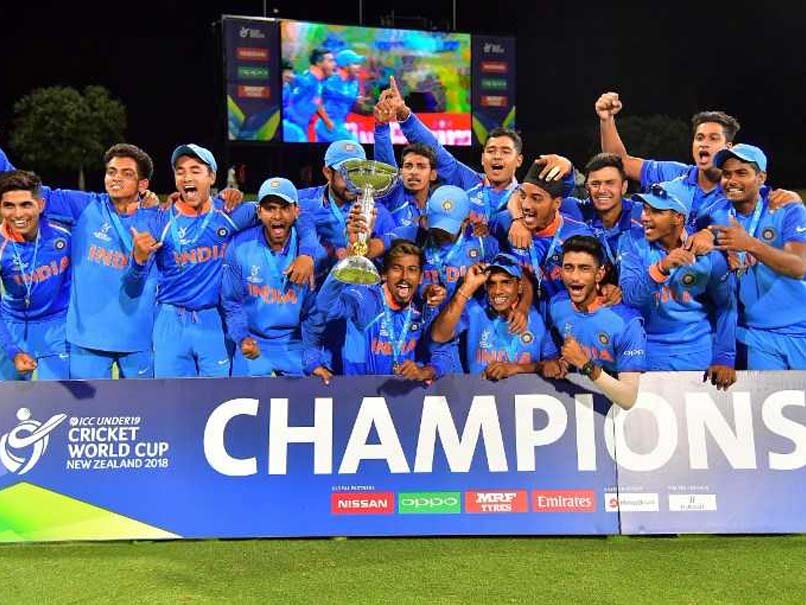 India won the Under-19 World Cup by eight wickets© AFP

India thrashed Australia by eight wickets on Saturday to win the ICC Under-19 World Cup for the record fourth time. The Indian team, coached by Rahul Dravid, put in a clinical batting display with Manjot Kalra smashing an unbeaten 101 off 102 balls. India (220/2) reached the target with eight wickets in hand and 11.1 overs to spare as they completely outclassed the Australians. Captain Prithvi Shaw joined the likes of Mohammad Kaif (2002), Virat Kohli (2008) and Unmukt Chand (2012) in leading India to the U-19 World Cup title. After the historic win, the Indian cricketers applauded the team's effort.

Dravid, who also coached the team to the final in the 2016 edition of the tournament, was applauded by cricketers, past and present, for his contribution in nurturing young talent. Among those appreciating Dravid's work was former Pakistan cricket captain Shahid Afridi, who played a lot of his cricket against the India great. "Congratulations India, exceptional U19 team, great coach and mentor in Rahul Dravid. Future stars in the making," Afridi tweeted.

After the final, Dravid hoped that his World Cup winning wards would have many such lasting memories in the future, adding that the support staff had helped him make the title triumph possible. "I am really proud of the boys and the effort they put in. "Proud of the effort they put in and couldn't be happier for them. Hopefully it's a memory they cherish for a long, long time, but hopefully not the lasting memory and they have many more great moments and bigger things in future," the batting legend said.

Comments
Topics mentioned in this article
India U19 Manjot Kalra Shubman Gill Prithvi Shaw Rahul Dravid ICC Under-19 World Cup Cricket Virat Kohli Rohit Sharma Shikhar Dhawan
Get the latest updates on ICC T20 Worldcup 2022, check out the Schedule and Live Score. Like us on Facebook or follow us on Twitter for more sports updates. You can also download the NDTV Cricket app for Android or iOS.