Ishan Porel was instrumental in India's win against Pakistan in the semi-final. 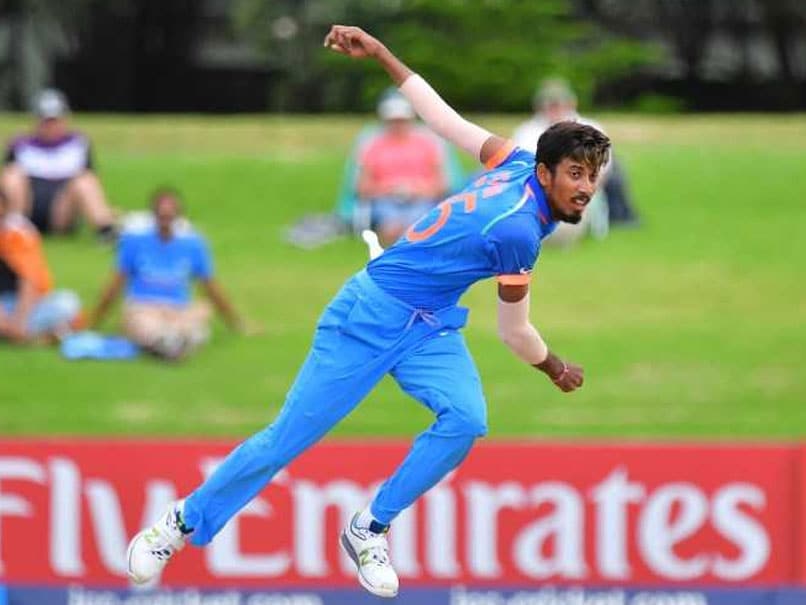 Ishan Porel in action during the U19 World Cup final between India and Australia.© AFP

The new-found adulation aside, for India U-19 World Cup winning pacer Ishan Porel, the next few months will be spent trying to emulate fast bowlers of the senior team and walk on their path in realising his "dream" of making the 2019 World Cup squad. "My aim would now be to first recover from my injury and then try to emulate our senior team bowlers. (Jasprit) Bumrah, (Mohammed) Shami, Bhuvi (Bhuvneshwar Kumar) they all have so much variation in their bowling and I will look to do that as well.

"It won't be easy to get into the Indian team like that and playing for India in the 2019 World Cup is still a dream," Porel told IANS after touching down in Kolkata, days after helping the U-19 team lift the World Cup for a record fourth time in New Zealand.

Porel's coach Bibhash Das had stressed a few days ago that his student should now aim breaking into the India team for the World Cup.

"I am not thinking about that (senior team call up) at the moment. For now, I will have to work on my speed and I want to bowl closer to the batsmen, maintaining the line and length," Porel said.

"Now everyone wants me to play in India team. But I don't have a remote control that I will play in the senior team. It's a step by step procedure. I've do well in Ranji Trophy, Hazare, Mushtaq and then India A," he pointed out.

It was a festive atmosphere outside the Netaji Subhas Chandra Bose International Airport around 10:50 am when Porel was scheduled to arrive from Mumbai.

Shutterbugs kept on clicking to get the best shot as the wiry 19-year old came out of the airport, all smiles and soaking in all the euphoria, a first for him.

There was a lot of jostling among media persons to which Porel took note and obliged all of them at a city government guest house later.

"Nothing has changed for me. It's the same as earlier," Porel said reflecting on the hoopla surrounding him since winning the Cup.

"It's just that getting more attention. I want to know what I'm doing. It's an advantage as I will be keenly followed in whatever tournament I play. And, if I'm able to perform well, it will help my cause.

"Now everyone recognises my face, many also clicked selfies. It's another experience. I'm getting everything I desired as a kid, maybe slowly it's happening. But I will always keep in mind that it's just the beginning. I will have to focus on future," Porel said reflecting on all the hoopla surrounding him.

Hailing for Chandannagar, a town in Hoogly district, 52 kilometers from Kolkata, Porel is not likely to play the Vijay Hazare 50-overs domestic tournament for Bengal in order to recover fully from his foot injury.

Porel picked up the knock during India's opener against Australia and could not play the next league engagements before returning to the fold against Bangladesh in the quarter-final.

Porel was instrumental in India's win against Pakistan in the semi-final, grabbing four wickets. He took two wickets in the final as well, where India beat Australia by eight wickets.

"When I got injured, I broke down and was angry on myself," Porel said.

"Then when I heard Aditya Thakhare will replace me, the determination to get back and play increased. I just had to comeback."

Porel made his Ranji Trophy debut against eventual champions Vidarbha last year, returning figures of 4/139 in the first innings.

"Last year I would have made my debut in the Ranji opener against Rajasthan. But I had to return because of an injury. I was out for three months. Knee injury, ligament was out for six-seven months. A pacer is always injury-prone.," Porel said.

Asked about coach Rahul Dravid's statement on Monday that India were not at their best in the final, Porel said, "We played well that's why we won. But yes the brand of cricket we played in the quarter-final and semi-final, we could not replicate that maybe. There was pressure of final."

Porel will now go to the National Cricket Academy (NCA) in Bengaluru for rehabilitation.

"The injury is still there and in the final it was paining while I was bowling. I did not let that affect my performance. Now I will do rehab at NCA and try to get back in shape. I am going to NCA after 7-8 days," the Dale Steyn and Brett Leee fan signed off.

Comments
Topics mentioned in this article
India U19 Ishan Porel ICC Under-19 World Cup Cricket
Get the latest updates on ICC Women's Cricket World Cup 2022 and IPL 2022, check out the Schedule , Live Score and IPL Points Table. Like us on Facebook or follow us on Twitter for more sports updates. You can also download the NDTV Cricket app for Android or iOS.