"There a lot of memories created. I can't express, what I am feeling right now. I am just happy," said Shaw after a historic victory. 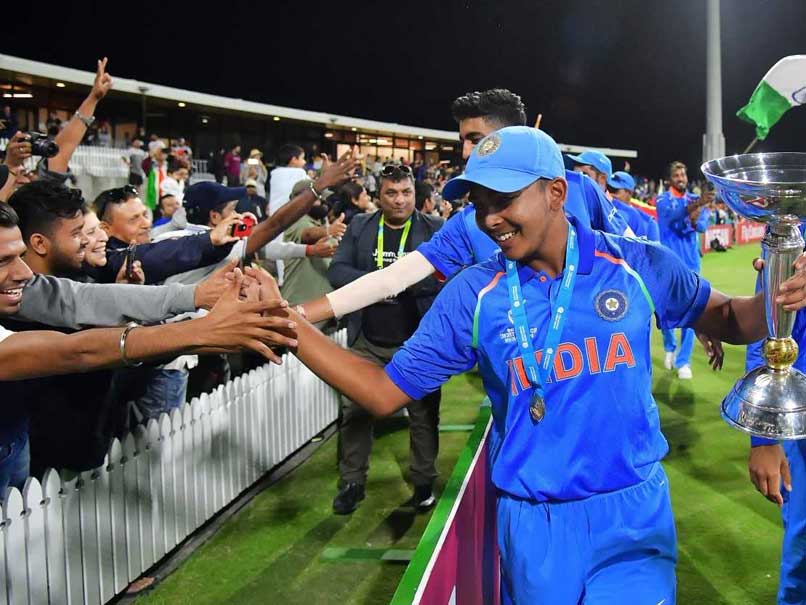 India captain Prithvi Shaw took a lap honour with the coveted trophy in his hand.© AFP

The India U-19 team captain Prithvi Shaw on Saturday joined the likes of Mohammad Kaif (2002), Virat Kohli (2008) and Unmukt Chand (2012) in leading India to the U-19 World Cup title. The Shaw-led team remained unbeaten in the 2018 U-19 World Cup as they brushed aside their opponents in the final by eight wickets to bring the coveted trophy back to India. Post-match, Shaw found it hard to express his emotions but did speak about how much the World Cup meant to the team. "There a lot of memories created. I can't express, what I am feeling right now. I am just happy," said Shaw.

"It feels really good. Winning this World Cup, it means a lot to us, making India proud. We are enjoying ourselves whether we were batting or bowling," he said.

Asked what he was going through having achieved the target of winning the World Cup, Shaw said: "There were not many emotions. It was mazzak and masti (fun and frolic). We were waiting for this tournament. We have played together for 1-2 years. As a captain, I have been backed. Whenever I was under pressure, the team backed me (rallied around me)."

Shaw did not fail to express his gratitude towards the Indian fans who gathered to support the team from the beginning of the tournament.

"They all came to watch us. They supported us from the first ball. We got so much of love, we did not expect so many fans. And because of them, we were always fired up."

Asked what did he convey to his teammates after the Australian innings ended, Shaw said he did not want his side to be complacent.

"It was not that big a score. I did not want boys to be casual, it was a big thing, it is a World Cup final. We needed to be calm and have partnerships. Those little things helped."

Shaw, who already has five first-class hundreds to his name, said playing in New Zealand was a good learning curve.

"It was a good experience, we learnt a lot in these weather conditions. Rahul sir has visited here a lot and he told us how to play, also Paras sir. It was a teamwork," he signed off.

Comments
Topics mentioned in this article
India U19 Australia U19 Prithvi Shaw ICC Under-19 World Cup Cricket
Get the latest updates on ICC T20 Worldcup 2022, check out the Schedule and Live Score. Like us on Facebook or follow us on Twitter for more sports updates. You can also download the NDTV Cricket app for Android or iOS.