WATCH: When Hardik And Son Agastya Decided To Get Interviewed Together 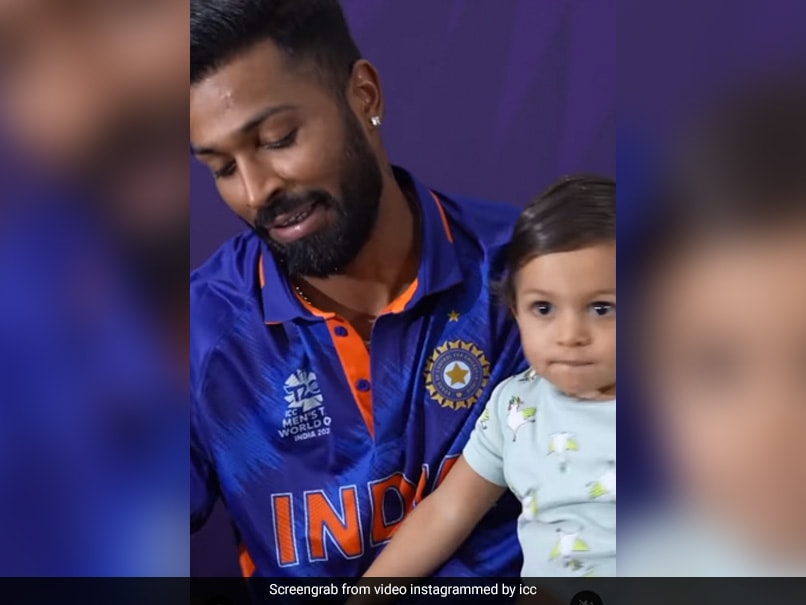 T20 World Cup: Hardik Pandya with his son during an interaction with ICC.© Instagram

The International Cricket Council (ICC) on Friday shared an adorable clip, on social media, of India all-rounder Hardik Pandya getting a surprise visit from his son Agastya during an interview. The video has become an instant hit as fans cannot stop gushing about the adorable interaction between the father-son duo. "This will melt your heart," ICC captioned the video on Instagram. Hardik's Indian Premier League (IPL) team Mumbai Indians (MI), too, dropped a comment on the post, saying, "it sure did."

The footage starts with Agastya walking into the room. Soon, his face lights up after he sees Hardik sitting on a chair. The cricketer then asks his son, "How are you"? However, it seems, rather than his father, something else is occupying Agastya's mind, as he could be seen pointing towards something with his finger.

Hardik then asks his son if he could finish the interview and then come. But after not getting any reaction from his son, Hardik decides to do the interview with his son. After that, the interviewer shows Hardik an image from the time when Agastya was born. On seeing that picture, Hardik asks his son, if he recognises the infant in the picture. However, Agastya, too engrossed in his thoughts, could be heard saying "papa".

Describing the special day, Hardik said that he told his partner Natasa Stankovic that he would not be in the room with everything happening. However, he somehow managed to stay and then saw his son. Hardik also joked about how tiny his son looked when he was born compared to now.

After that, Hardik decided to do the interview alone.

The post has got over 1.68 lakh likes so far. Hardik is currently in the United Arab Emirates (UAE) for the ongoing ICC Men's T20 World Cup. India takes on Scotland later today in another must-win encounter.

Hardik Pandya ICC T20 World Cup 2021 India vs Scotland, Super 12 - Match 37 Cricket
Get the latest updates on SA vs IND 2021-22, check out the Schedule and Live Score . Like us on Facebook or follow us on Twitter for more sports updates. You can also download the NDTV Cricket app for Android or iOS.