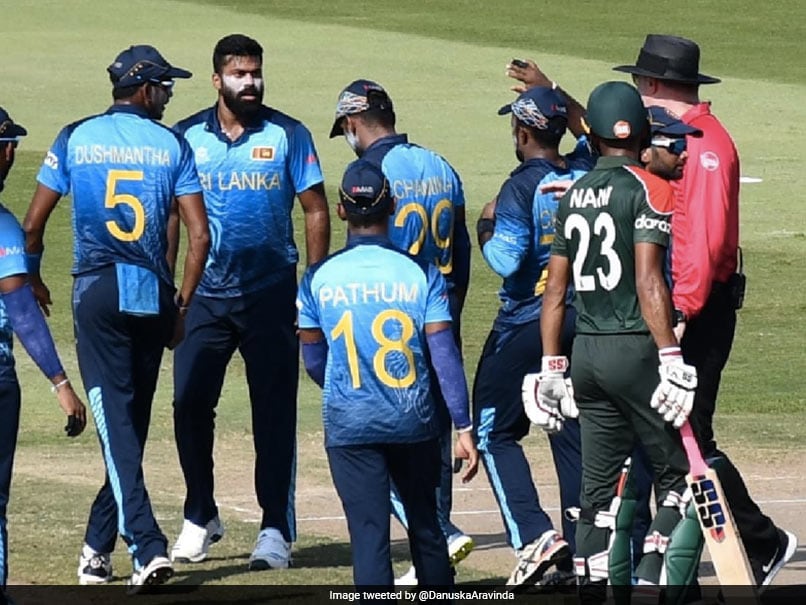 Liton Das and Lahiru Kumara were involved in a heated exchange on Sunday.© Instagram

Sri Lanka pacer Lahiru Kumara was involved in a heated exchange with Bangladesh opener Liton Das after dismissing the latter during their Super 12 clash in the ongoing 2021 T20 World Cup at the Sharjah Cricket Stadium on Sunday. The incident took place on the fifth delivery of the sixth over when Liton was caught at mid-off while trying to drive a Kumara delivery. Kumara immediately walked up to the departing Liton and exchanged a few words with the Bangladesh opener.

The matter escalated into physical contact as both players had to be pulled apart while trying to push and shove each other.

Mohammad Naim, who was batting at the other end for Bangladesh, and Sri Lanka's Chamika Karunaratne stepped in to separate the sparring pair.

Liton had scored 16 before he was dismissed by Kumara. After being put in to bat first by Sri Lanka, Bangladesh started well as Naim scored a half-century.

After Liton's dismissal, Bangladesh would also lose Shakib Al Hasan in a short while when a sensational Karunaratne delivery castled the star all-rounder.

However, Mushfiqur Rahim helped revive his side's innings and as he stitched a 73-run stand with Naim for the third wicket.
Rahim scored a half-century to power his side past the 150-run mark.
Both sides have entered the Super 12 stage after going through a first round. Bangladesh finished second in Group B after losing one and winning two of their three games while Sri Lanka topped Group A with a perfect record.

Sri Lanka Cricket Team Liton Das Lahiru Kumara Cricket
Get the latest updates on ICC Women's Cricket World Cup 2022 and IPL 2022, check out the Schedule , Live Score and IPL Points Table. Like us on Facebook or follow us on Twitter for more sports updates. You can also download the NDTV Cricket app for Android or iOS.