T20 World Cup: With Quinton de Kock issuing an official statement, Cricket South Africa apologized for the timing of its "taking the knee" directive and also appreciated the cricketer's apology. 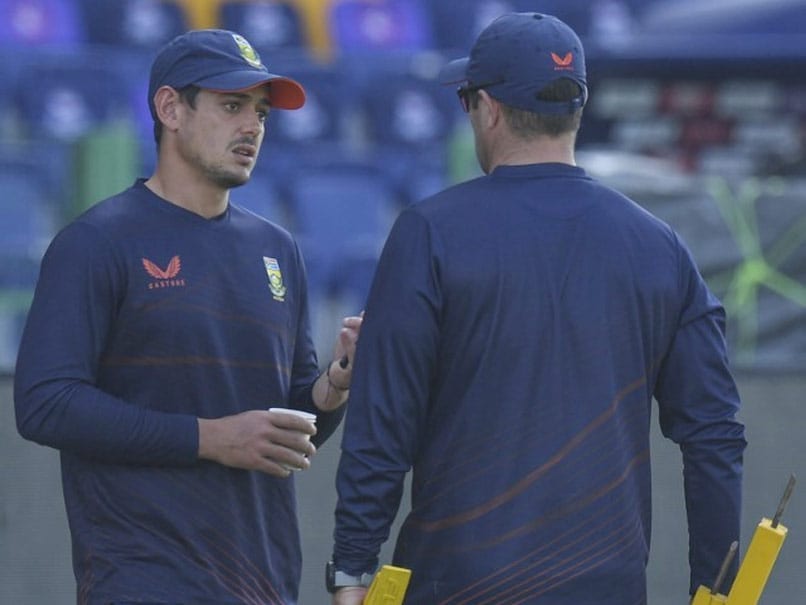 Last night, the Cricket South Africa Board chairman and two directors had a word with the men's Proteas team and management to discuss the Board's directive regarding "taking the knee". The Board representatives clarified the their position and engaged with the issues raised by the players. "Following the meeting, the Proteas men's team agreed to align and unify in taking the knee for the remaining fixtures of the World Cup campaign. CSA has also noted the statement issued by Quentin de Kock in which he too has agreed to take the knee and issued an apology," said CSA in an official statement.

"The CSA is fully supportive of the Proteas Men's team and its captain Temba Bavuma and looks forward to continued successes by the Proteas at the World Cup," it added.

Cricket South Africa has welcomed all of these developments. "Taking a united stance against racism is a moral issue, not a political issue. The CSA Board regrets that the timing of its directive earlier this week may have been unsettling for the players in the lead-up to the match against the West Indies," said the board.

Earlier, Quinton de Kock explained his reasons for not taking the knee ahead of the ICC Men's T20 World Cup game against West Indies.

"I would like to start by saying sorry to my teammates, and the fans back home. I never ever wanted to make this a Quinton issue. I understand the importance of standing against racism, and I also understand the responsibility of us as players to set an example. If me taking a knee helps to educate others, and makes the lives of others better, I am more than happy to do so," said de Kock in an official statement released by Cricket South Africa (CSA).

"I did not, in any way, mean to disrespect anyone by not playing against the West Indies, especially the West Indian team themselves. Maybe some people don't understand that we were just hit with this on Tuesday morning, on the way to a game. I am deeply sorry for all the hurt, confusion and anger that I have caused," he added.

"Since our chat with the board last night, which was very emotional, I think we all have a better understanding of their intentions as well. I wish this had happened sooner because what happened on match day could have been avoided. I know I have an example to set. We were previously told we had the choice to do what we felt we wanted to do," said de Kock.

"I chose to keep my thoughts to myself and thought of the pride of playing for my family and my country. I didn't understand why I had to prove it with a gesture when I live and learn and love people from all walks of life every day. When you are told what to do, with no discussion, I felt like it takes away the meaning. If I was racist, I could easily have taken the knee and lied, which is wrong and doesn't build a better society," he added.

Further talking about the issue, de Kock said, "Those who have grown up with me and played with me, know what type of person I am. I've been called a lot of things as a cricketer. Doff. Stupid. Selfish. Immature. But those didn't hurt. Being called a racist because of a misunderstanding hurts me deeply. It hurts my family. It hurts my pregnant wife."

"I am not a racist. In my heart of hearts, I know that. And I think those who know me know that. I know I'm not great with words, but I've tried my best to explain how truly sorry I am for making like this is about me. It is not," he added.

Quinton de Kock ICC T20 World Cup 2021 Cricket
Get the latest updates on IND vs NZ 2021, check out the Schedule and Live Score . Like us on Facebook or follow us on Twitter for more sports updates. You can also download the NDTV Cricket app for Android or iOS.