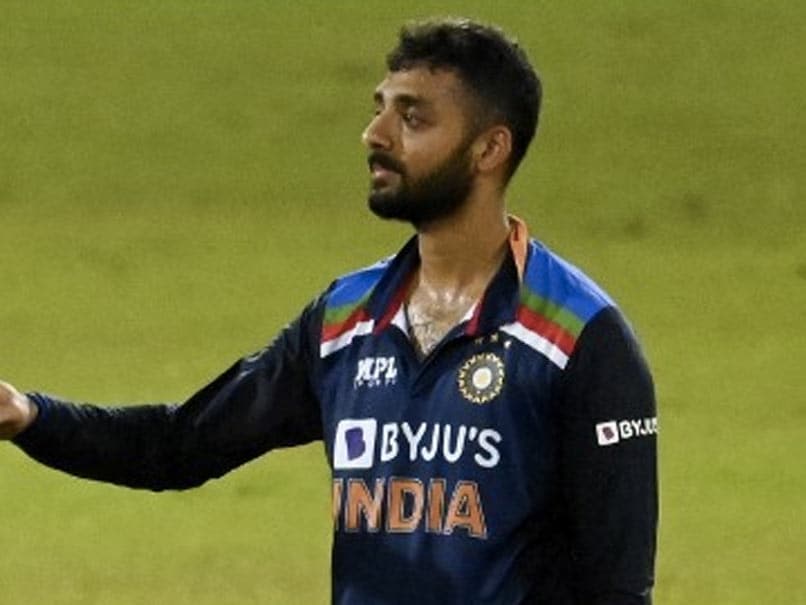 Varun Chakaravarthy finished with figures of 0/33 from his four overs against Pakistan.© AFP

India endured a nightmare start to their 2021 T20 World Cup campaign in Dubai on Sunday as they suffered a 10-wicket loss at the hands of arch-rivals Pakistan. Having managed to post of total of 151/7 in their 20 overs, Indian bowlers failed to get a breakthrough as Pakistan captain Babar Azam and his fellow opener Mohammad Rizwan comfortably chased down the target. India got off to a disastrous start after being put in to bat first, as the side lost three early wickets. Skipper Virat Kohli's 57-run knock and Rishabh Pant's innings of 39 helped India recover from the early blows and eventually get past the 150-run mark.

However, India's bowlers were left frustrated as Azam and Rizwan played flawless knocks to take Pakistan past the finishing line.

Varun Chakaravarthy, who was included in the playing XI, with the experienced Ravichandran Ashwin being kept out, too had his share of struggles as he finished with figures of 0/33 from his four overs.

According to former Pakistan captain Salman Butt, playing Chakaravarthy was a mistake. Butt contended that Chakaravarthy's reputation of being a "mystery bowler" doesn't hold true against Pakistan's batters.

"Varun Chakaravarthy might be a mystery bowler. But we play tape-ball cricket in our streets while growing up. In street cricket, every kid in Pakistan faces bowling with such finger movement (as Chakaravarthy's). So Varun Chakaravarthy was no surprise to us," Butt explained while speaking on his YouTube channel.

"Similarly, Ajantha Mendis had come to play for Sri Lanka. He had troubled many teams but he does not have a good record against Pakistan. There was a time when Sri Lanka stopped playing him against Pakistan because we did not find his bowling a mystery," he added.

"India missed a trick or two (during the game). Firstly, they didn't induct enough pace into their pace battery. Secondly, instead of their classical spinners, they opted for a mystery spinner against Pakistan. For Pakistan batters, Varun is no mystery,” Butt reiterated.

Pakistan Cricket Team Varun Chakravarthy ICC T20 World Cup 2021 India vs Pakistan, Super 12 - Match 16 Salman Butt Cricket
Get the latest updates on Fifa Worldcup 2022 and check out  Fifa World Cup Schedule, Stats and Live Cricket Score. Like us on Facebook or follow us on Twitter for more sports updates. You can also download the NDTV Cricket app for Android or iOS.