T20 World Cup, ENG vs SL: Jason Roy and Sam Billings combined brilliantly at the long-off boundary to send Wanindu Hasaranga back to the pavilion during England's win over Sri Lanka on Monday. 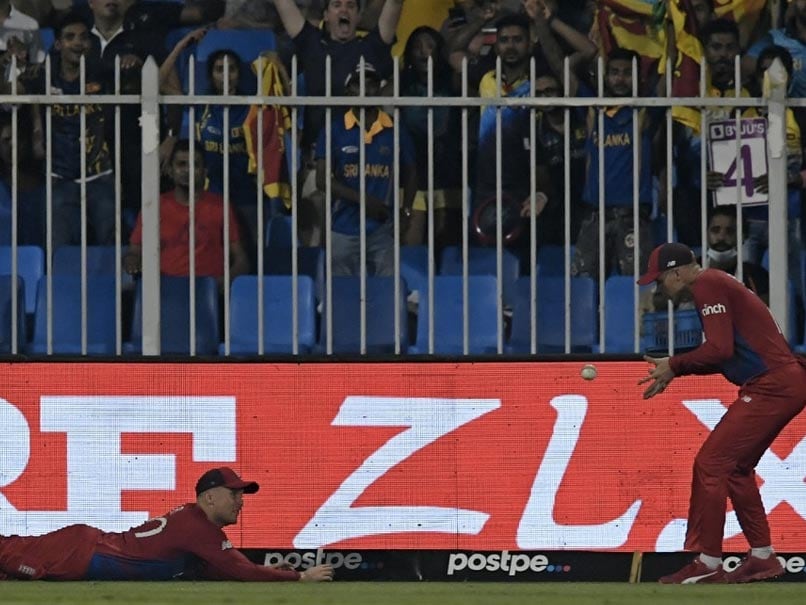 Jason Roy and Sam Billings combined to take a fine catch at the long-off boundary.© AFP

England continued their winning form in the ongoing T20 World Cup, defeating Sri Lanka for their fourth consecutive victory in the Super 12 stage on Monday. The Eoin Morgan-led side won by 26 runs and once again showed fans as to why they are considered to be one of the favourites. After an unbeaten century from Jos Buttler helped England post 163 for four in 20 overs, Sri Lanka were bowled out for 137 in 19 overs. There were many highlights from the game which showed England's dominance like Buttler's ton or Moeen Ali's bowling spell. One particular moment which stood out was Wanindu Hasaranga's dismissal in the 17th over of the chase.

The 24-year-old could have won the game for his side and had already smashed 34 off 21 deliveries.

But on the fifth delivery of the 17th over, Hasaranga smacked a full delivery from Liam Livingstone towards long-off where a sprinting Jason Roy took a brilliant catch near the ropes.

But with his momentum taking him dangerously close to the boundary line, Roy lobbed the ball to Sam Billings, who managed to keep hold of it. It was a crucial moment in the game with Sri Lanka losing their top-scorer.

Here is the video of the catch:

Other than Buttler's knock, England spinners were also in top form with Moeen and Adil Rashid taking two wickets each.

Jason Roy Sam Billings Wanindu Hasaranga ICC T20 World Cup 2021 England vs Sri Lanka, Super 12 - Match 29 Cricket
Get the latest updates on Fifa Worldcup 2022 and check out  Fifa World Cup Schedule, Stats and Live Cricket Score. Like us on Facebook or follow us on Twitter for more sports updates. You can also download the NDTV Cricket app for Android or iOS.