T20 World Cup: New Zealand wicketkeeper Devon Conway took a fine catch that sent Afghanistan opener Mohammad Shahzad back to the pavilion in the third over of the match. 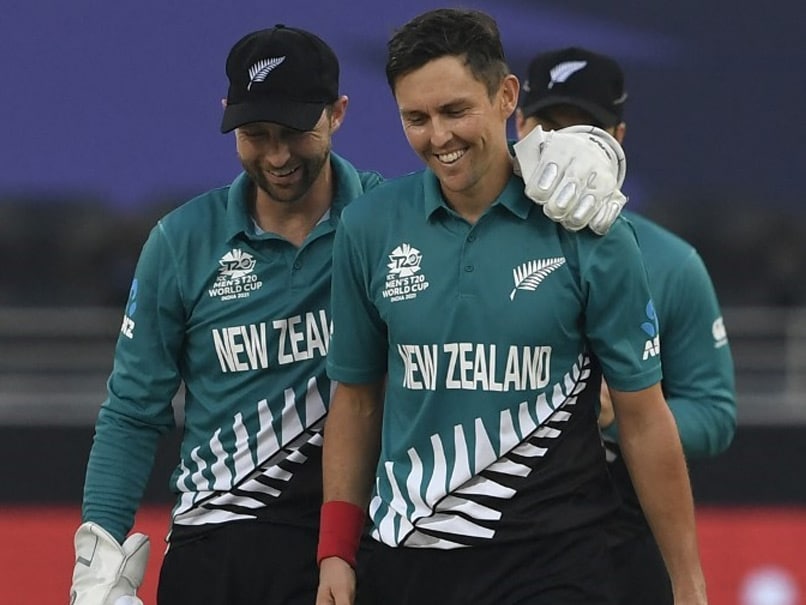 New Zealand beat Afghanistan on Sunday in their last group game of the ongoing T20 World Cup to progress to the semifinals of the tournament. Chasing a target of 125 runs, New Zealand lost both their openers -- Martin Guptill (28) and Daryl Mitchell (17) -- within the first 10 overs but an unbeaten partnership of 68 runs between skipper Kane Williamson (40 not out) and Devon Conway (36 not out) guided the Black Caps to an eight-wicket win over the Mohammad Nabi-led Afghanistan. Earlier while bowling, New Zealand restricted Afghanistan to 124/8 in 20 overs with excellent spells from Trent Boult (3/17) and Tim Southee (2/24).

During the Afghan innings, New Zealand wicketkeeper Conway took an excellent catch behind the stumps that sent opener Mohammad Shahzad (4) back to the pavilion in the third over of the match.

Adam Milne bowled a short ball and Shahzad threw his bat at it, trying to play the ball over the third man. The ball found the edge of Shahzad's bat and flew to the right side of the wicketkeeper.

Conway dived to his right side palmed the ball, it bounced off his right wrist before the New Zealander finally got it under his control and pouched it safely.

ICC also shared a video of the catch on their Instagram handle, captioning it, "Milne strikes as Conway takes a good catch with Shahzad walking back for 4."

With the win, New Zealand sealed their spot in the final four of the tournament for the second time in a row. They were also semi-finalists in the 2007 T20 World Cup.

New Zealand Cricket Team Devon Conway ICC T20 World Cup 2021 New Zealand vs Afghanistan, Super 12 - Match 40 Cricket
Get the latest updates on Fifa Worldcup 2022 and check out  Fifa World Cup Schedule, Stats and Live Cricket Score. Like us on Facebook or follow us on Twitter for more sports updates. You can also download the NDTV Cricket app for Android or iOS.