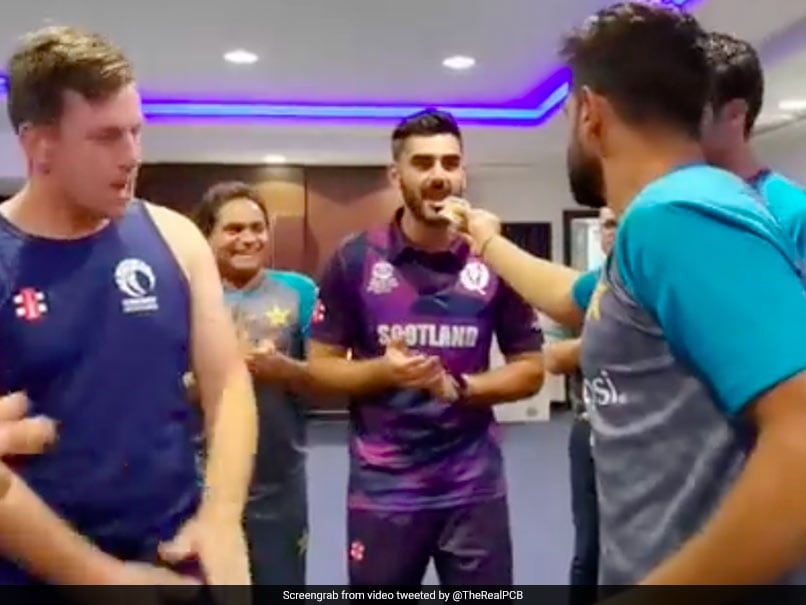 In a heartfelt gesture, the Pakistan cricket camp invited the Scotland players for pacer Haris Rauf's cake cutting ceremony on his 28th birthday after their last Super 12 game at the ongoing T20 World Cup 2021. The Scottish players were seen bonding and in discussions with Pakistan stars including skipper Babar Azam, Shadab Khan and several others. A video posted on social media by the Pakistan Cricket Board was welcomed warmly in the cricketing circles. Pakistan overwhelmed Scotland by 72 runs but that didn't stop the two camps from sharing post-match greetings.

The video by the PCB was captioned
"Pakistan team celebrate the birthday of @HarisRauf14 with @CricketScotland!.

Recently, Scotland players were seen interacting with Indian players in their dressing room post their defeat to the Asian giants.

The video involving Indian skipper Virat Kohli and mentor MS Dhoni was seen as the right kind of example which showcased the "spirit of cricket".

The mere interaction of these Scotland players with some of the best players in the game from India and Pakistan was seen as a big motivating factor and something which could definitely improve the stature of the sport in their country.

Scotland finished last in their group after enduring five loses in five games in the Super 12 stage.

For India, the tournament proved to be a huge disappointment as they failed to make it to the semis while suffering a 10-wicket loss against arch rivals Pakistan in the process.

Pakistan, on the other hand, have taken the tournament by storm and registered five straight wins and became the first team to qualify for the semis-finals, where they are slated to meet Australia.

Babar Azam Haris Rauf ICC T20 World Cup 2021 Cricket
Get the latest updates on SA vs IND 2021-22, check out the Schedule and Live Score . Like us on Facebook or follow us on Twitter for more sports updates. You can also download the NDTV Cricket app for Android or iOS.