T20 World Cup, IND vs PAK: After India's loss to Pakistan in their Super 12 fixture on Sunday, Virat Kohli and MS Dhoni showed the "Spirit of Cricket" and interacted with the opposition players. 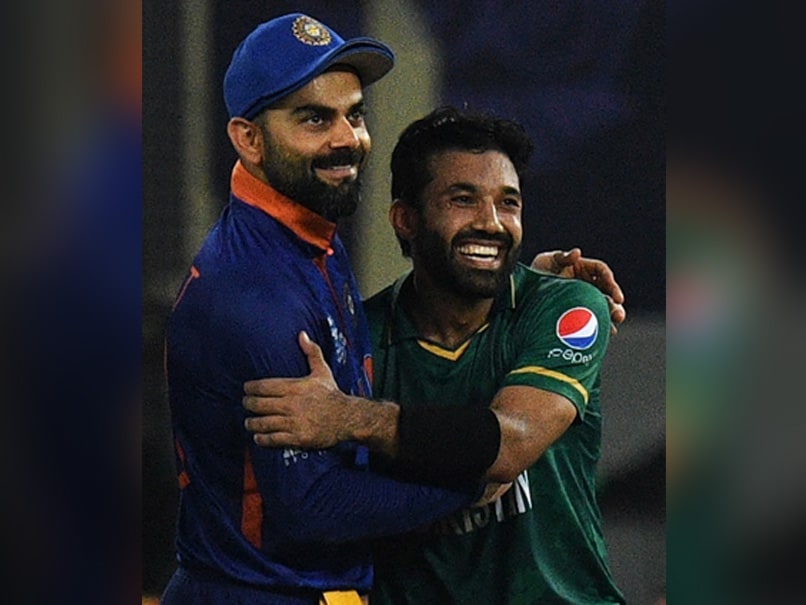 Despite a big defeat to Pakistan in a T20 World Cup Super 12 match on Sunday, captain Virat Kohli showed the "Spirit of Cricket" as he interacted with the opposition players after the match. Pakistan defeated India by 10 wickets on Sunday in at the Dubai International Stadium. Openers Mohammad Rizwan and Babar Azam stitched together a 152-run partnership to help Pakistan cruise to in the chase. Kohli was seen speaking to Pakistan's opening duo right after the match. Broadcasters also showed Team India mentor MS Dhoni in conversation with some Pakistan cricketers after the game and it sent social media into a state of meltdown.

The Pakistan Cricket Board (PCB) took to social media to share a photograph of Kohli interacting with Rizwan, Azam and captioned it as, "Spirit of Cricket! #WeHaveWeWill".

The photo was well-received by fans, who hailed the trio. Bismah Maroof, who is the captain of the Pakistan women's cricket team, applauded the players and commented, "We want/need to see this more often".

Meanwhile, Dhoni's pictures were shared by fans on social media. The former India captain could be seen interacting with the likes of Babar Azam, Shoaib Malik and Imad Wasim.

Fans hailed the moment with one user writing, "The beautiful game, Dhoni passing on knowledge to Babar".

Captions won't do justice but what a wonderful game of cricket it was.

Kudos to Kohli for his sportsmanship.
Mahendra Singh Dhoni is a LEGEND! pic.twitter.com/kzpqhDRsfa

Chasing a target of 152 runs, Pakistan reached 152 for no loss in just 17.5 overs. Openers Rizwan and Azam remained unbeaten after knocks of 79 and 68, respectively.

Earlier, India posted 151 for seven in 20 overs after making a disastrous start. Openers KL Rahul and Rohit Sharma were trumped by pacer Shaheen Afridi with the latter getting dismissed for a first-ball duck. Meanwhile, Rahul could only muster three runs off eight deliveries.

Kohli's half-century (57 off 49 balls) proved to be crucial and Rishabh Pant also contributed with a knock of 39 runs in 30 balls as India battled to a respectable total.

Babar Azam ICC T20 World Cup 2021 India vs Pakistan, Super 12 - Match 16 Cricket Social
Get the latest updates on Fifa Worldcup 2022 and check out  Fifa World Cup Schedule, Stats and Live Cricket Score. Like us on Facebook or follow us on Twitter for more sports updates. You can also download the NDTV Cricket app for Android or iOS.