Watch: Chris Gayle Dismisses Mitchell Marsh And "Celebrates Like Only He Can"

With Australia on the brink of a win, West Indies captain Kieron Pollard gave the ball to Chris Gayle, who picked up the wicket of Mitchell Marsh on the final delivery of his over. 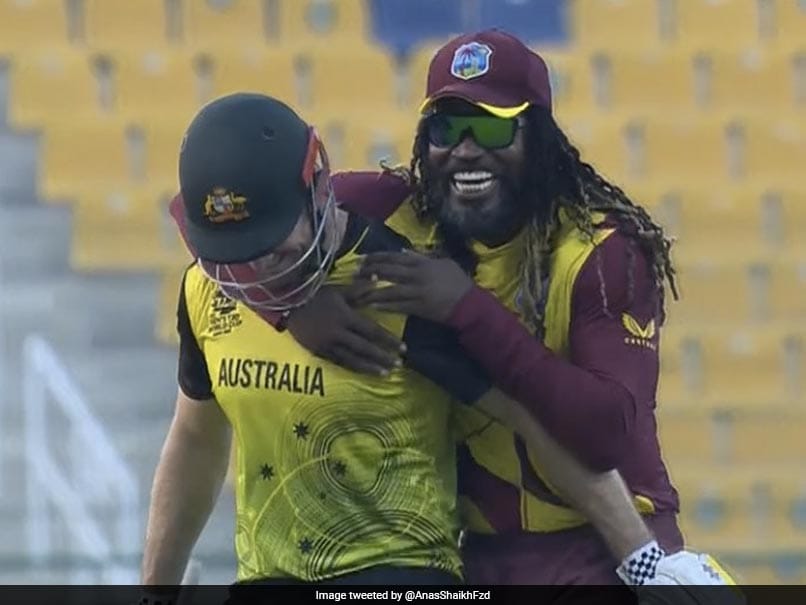 Chris Gayle might have played his last T20 World Cup game for the West Indies and the 'Universe Boss' signed off in style by taking the wicket of Mitchell Marsh. West Indies lost to Australia in their final 2021 T20 World Cup match, but both Gayle and Dwayne Bravo, who played his final game for the West Indies, were given a warm ovation by their teammates as well as the Australian players. Gayle was in a jovial mood throughout the match, coming out to open the innings, wearing his sunglasses and that didn't change even when he bowled.

With Australia on the brink of a win, West Indies captain Kieron Pollard gave the ball to Chris Gayle. Much to his delight, Gayle picked up the wicket of Marsh on his final delivery of the over with the scores tied.

After dismissing Marsh, Gayle ran straight to the Australian, who was already walking off, and gave him a big hug from behind.

To his credit, Marsh also gave Gayle a pat of acknowledgment. The entire sequence made for some great viewing and luckily for us, the ICC shared a video of it on their official Instagram handle.

The win helped Australia book a berth in the semi-finals. The Aussies chased down the 158-run target in 16.2 overs, giving their net run-rate a further boost, which came in handy with the result of the evening match between England and South Africa.

Australia were made to wait to know their semis fate with England and South Africa facing each other in the second game on Saturday.

An England win would have made it straightforward for the Aussies as they along with the English would have qualified. But with South Africa putting up a big score batting first and then putting England in trouble in the chase, the Australians were made to sweat.

South Africa went on to beat England by 10 runs, but the margin of victory wasn't big enough for the Proteas to make it to the last four. In the end, Australia and England qualified for the semis ahead of the South Africans by virtue of having a better run-rate.

Chris Gayle ICC T20 World Cup 2021 Australia vs West Indies, Super 12 - Match 38 Cricket
Get the latest updates on SA vs IND 2021-22, check out the Schedule and Live Score . Like us on Facebook or follow us on Twitter for more sports updates. You can also download the NDTV Cricket app for Android or iOS.