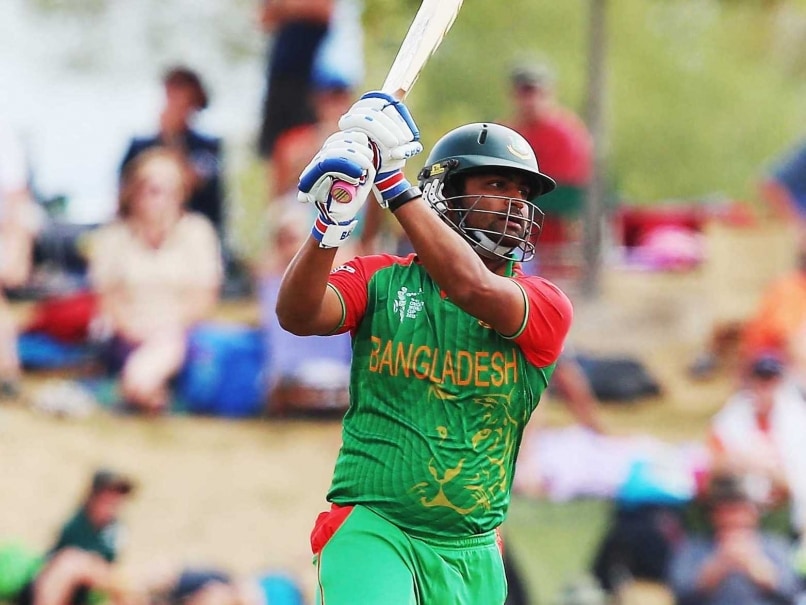 Kyle Coetzer's career-best 156 went in vain as Bangladesh scripted a brilliant chase to notch up a comprehensive six-wicket win over Scotland in their pool A ODI match of the Cricket World Cup here on Thursday.Â (Blog | Scorecard)

Chasing 319 to win, Bangladesh cruised to a seemingly stiff target with 11 balls to spare, riding on four individual fifties by Tamim Iqbal (95), Mahmudullah (62), Mushfiqur Rahim (60) and Shakib Al Hasan (52 not out).

After opener Iqbal and No. 3 batsman Mahmudullah (62) laid the foundation for the chase with a 139-run stand and Rahim provided the support in the middle, it was Hasan, who brought up the win with a four off Iain Wardlaw in the 49th over at the Saxton Oval.

Earlier, opener Kyle Coetzer hammered a career-best 134-ball 156 to power Scotland to 318 for eight but it wasn't enough in the end as Bangladesh chased down the target to keep their quarterfinal hopes alive.

For Scotland, Josh Davey took two wickets, while Wardlaw and Alasdair Evans scalped one each.

Chasing 319 to win, Bangladesh lost an early wicket in Soumya Sarkar, who was dismissed by Davey in the second over itself after the pacer induced a faint edge.

However, Iqbal and Mahmudullah produced a brilliant 139-run partnership to recover from the early jolt and keep their chase on track.

Wardlaw broke the partnership in the 24th overs when he disturbed Mahmudullah's stumps with a toe-crushing delivery to reduce Bangladesh to 144 for two.

Iqbal then joined hands with Rahim as the duo brought up the 200 for Bangladesh with a 57-run partnership in 48 balls for the second wicket.

But just then, Iqbal lost his wicket, five runs short of a well-deserved century, when he was trapped in front of the wicket by Davey. Bangladesh called for an review which was turned down.

Rahim and Hasan then added another 46 runs for the fourth wicket in 39 deliveries, before the former was sent packing by Alasdair Evans in the 38th over as Bangladesh slipped to 247 for four.

Needing another 72 runs in 12 overs, Hasan and new batsman Sabbir Rahman (42 not out) piled up the runs with consummate ease in 10.1 overs.

Earlier put into bat, Coetzer anchored the Scotland innings as he shared a 141-run partnership for the fourth wicket with Preston Mommsen (39), besides adding 78 runs with Matt Machan (35) for the third wicket to lay the foundation for the total.

Coetzer's scintillating innings was studded with 17 boundaries and four sixes. After his dismissal, Richie Berrington (26) and Matthew Cross (20) played small cameos to take Scotland across the 300-mark.

For Bangladesh, Taskin Ahmed was the best bowler as he scalped three wickets for 43, while Nasir Hossain (2/32), skipper Mashrafe Mortaza (1/60) and Shakib Al Hasan (1/46) also contributed to team cause.

Bangladesh had reduced Scotland to 38 for two in 9.5 overs after Mortaza elected to field on the Saxton Oval track which looked to offer swing to the bowlers early on.

Mortaza led from the front when he struck the first blow dismissing opener Calum MacLeod (11) with a length delivery that found the leading edge of his bat as Mahmudullah took an easy catch at cover.

Taskin then got rid of Hamish Gardiner with Soumya Sarka taking the catch at cover, after an initial fumble, as Scotland slumped to 38 for 2.

Coetzer, however, ensured there were no more hiccups as he and Machan added 78 runs to take Scotland across the 100-mark. The stand was broken by Sabbir Rahman, who dismissed Machan with a caught and bowled effort in the 24th over.

Coetzer then forged another important partnership with Mommsen, sharing 141 runs off 113 balls, as the duo took Scotland past the 250-mark.

Spinner Nasir Hossain then picked up both Mommsen and Coetzer in successive overs but the run flow didn't dip as Berrington and Cross took Scotland across 300.

Comments
Topics mentioned in this article
Kyle Coetzer Scotland Bangladesh Cricket Team World Cup 2015 Cricket
Get the latest updates on India vs England Series, India vs England , live score and IPL 2021 Auction . Like us on Facebook or follow us on Twitter for more sports updates. You can also download the NDTV Cricket app for Android or iOS.