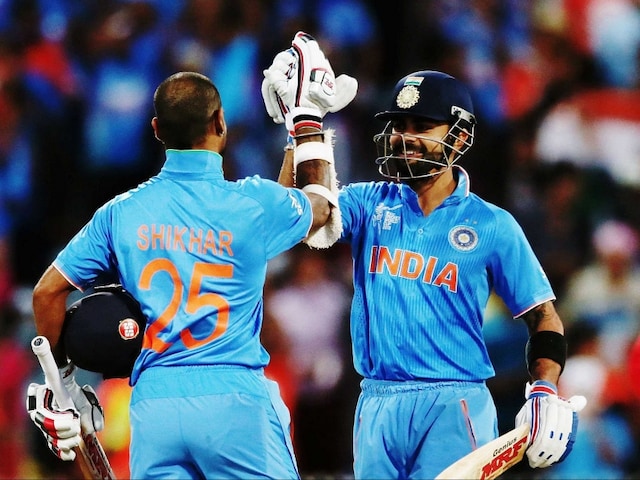 India took apart a diligent but limited Ireland attack to sweep to an untroubled eight-wicket victory at Seddon Park on Tuesday which confirmed they will top Pool B in the cricket World Cup.

After dismissing Ireland for 249 with an over to spare when their spinners established a stranglehold on the top-order batting, Rohit Sharma and Shikhar Dhawan played themselves in for a token couple of overs. (Scorecard|Blog)

They then launched a full-blooded attack, alternating flowing drives with explosive pulls while also pushing around the ball for comfortable singles.

Dhawan was dropped on five when John Mooney failed to hold a fierce caught-and-bowled chance. After scoring five further runs he was dropped again off the unlucky Mooney, this time at backward point when captain William Porterfield parried a stinging cut but was unable to hang on to the rebound.

Those were the only times the Irish bowlers looked like taking a wicket and the duo took the score to 174 when Sharma chopped medium pacer Stuart Thompson on to his stumps and was out for 64 from 66 balls.

With the Indian supporters making a tremendous din, Dhawan took a single to complete his eighth one-day century from 84 balls with five sixes but was then caught off the following ball he faced from Thompson.

Porterfield elected to bat on a warm afternoon before a capacity crowd of 11,000 packed into a picturesque ground in New Zealand's fourth largest city and all seemed set fair for the Irish when the captain and Paul Stirling put on 89 for the first wicket from 15 overs.

Mahendra Singh Dhoni turned to his spinners and Ravichandran Ashwin, Ravindra Jadeja andSuresh Raina responded by first frustrating then dismissing the Irish batsmen who found boundaries hard to come by after the initial flurry.

Stirling (42) lofted a simple catch to long-off off Ashwin's bowling and Ed Joyce was bowled for two trying to cut a ball from Raina which was too full for the shot.

Porterfield was reduced to pushing the ball for singles and was finally caught for 67 skying the ball while trying to accelerate.

Niall O'Brien was the top scorer with 75 including three sixes, one of which was helped over the boundary rope by Mohammed Shami leaping high to try to take the catch. O'Brien, swinging vigorously to the leg side, kept the scoreboard moving but wickets fell regularly at the other end, including that of the dangerous Kevin O'Brien who was caught behind for one from a thin edge off Shami.

Comments
Topics mentioned in this article
Ireland Cricket Team India Cricket Team Seddon Park, Hamilton World Cup 2015 Cricket
Get the latest Cricket news, check out the India cricket schedule, Cricket live score . Like us on Facebook or follow us on Twitter for more sports updates. You can also download the NDTV Cricket app for Android or iOS.