Suresh Raina has had a good World Cup so far, having scored an unbeaten 110 in the last game against Zimbabwe and a quickfire half-century against Pakistan in the opening match of the mega event. 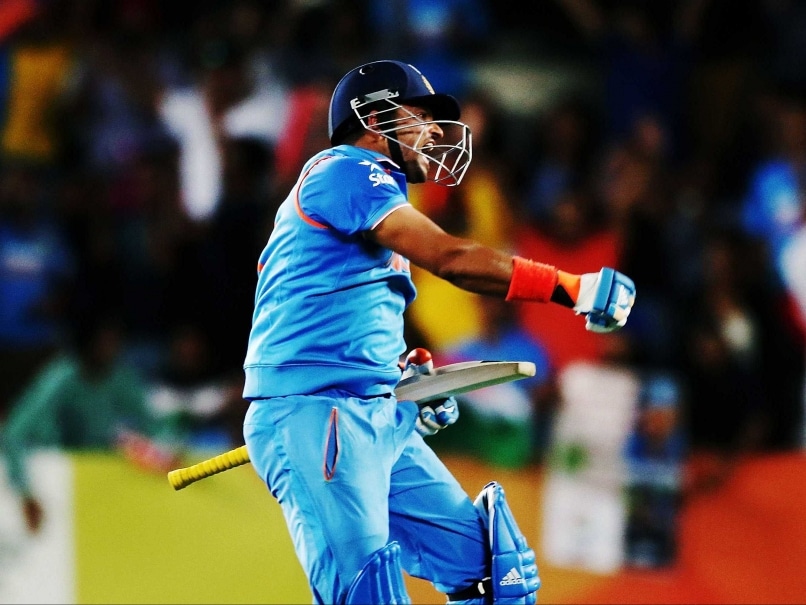 Have learnt a lot from Yuvraj and Kaif: Raina© Getty Images
Melbourne:

Confident after notching up a century ahead of the knock-outs, India's middle-order mainstay Suresh Raina believes that he has become "more matured" as a batsman in the past four years as he batted in different situations since the team won the cricket World Cup in 2011. (Pakistan Wouldn't Mind Facing India Again)

Raina has had a good World Cup so far, having scored an unbeaten 110 in the last game against Zimbabwe and a quickfire half-century against Pakistan in the opening match of the mega event.

"I have improved as a player (from 2011 onwards) having learnt a lot from players like Mahendra Singh Dhoni, Yuvraj Singh and Mohammed Kaif. I have played a lot of matches with them, coming in at different slots like No 4, 5 or 6. I know what sort of batting is needed for ODIs. So I think I've become more mature after 2011," Raina told media persons on the eve of India's quarter-final against Bangladesh at the MCG"

The Indian batting has ticked all the boxes in the tournament so far and the Uttar Pradesh left-hander is happy that he got going against Zimbabwe. (Secret of Dhawan's Success)

"I think I'm glad it happened against Zimbabwe and got enough to settle myself. When the team needed me the most and when you deliver it's the best feeling. At the same time, I got lucky. I was batting with MS and he told me "you just need to be focused with what you're doing the last few years. You need to be calm for yourself. Whenever you get the ball, you need to play your strokes"."

Raina said that he thrives in pressure situations and would not mind if the same need arises against Bangladesh.

"I really love all those pressure situations, I have done that in the past, but that game I got plenty of overs to chase those target, so I was very happy to win that game for my team. So I think now we have done all the homework in the batting department. Whether we're chasing, whether we're defending, we all need to go and express ourselves. I think we're all looking forward to that."

Raina was a part of the victorious 2011 squad but got to play only in the quarters, semis and final. But he is enjoying the journey in this edition as he is playing a bigger role and the team is also doing well on all fronts.

"I didn't get much time to play in 2011. But I did play in all the crucial games from quarterfinal onwards. It has been a long journey, but as a team I think we have done really well in all departments.

"If you look at the last six games we took 60 wickets.

And medium pace of fast bowlers have been a lot of disciplined work. I believe in tournaments like World Cup, self belief is the key and you can win in any situation."

The veteran of 213 ODIs has been a floater in this batting line-up and has no complaints about his batting order being shuffled at the behest of team management.

"I think it depends on coach and captain, what they want me to do. When I am batting at No.4, I need to just ensure that I am there at the crease before batting Powerplay so that I can play my strokes. I think I've done that really well in the last couple of years. So whatever team needs me to do, I need to prepare myself for that," said Dhoni's trusted lieutenant.

Having now been a part of the Indian team for close to 10 years, the inevitable question of not scoring more than six centuries was asked and he gave an elaborate reply.

"It becomes difficult at times. If you look at the statistics, when I was dropped from the side, I was making scores in the range of 35 and 40. In 15-20 innings, I didn't have a 50. That?s why I was dropped. I realized after that I need to spend more time. I know that if I play till the 50th over, the team can get 20-25 runs extra."

On their opponents Bangladesh, Raina showed a lot of respect stating that they won't take the Shakibs and the Rahims lightly but at the same time are not thinking about the debacle of 2007.

"You can't take Bangladesh lightly. They have done well against India, in World Cup as well as Asia Cup (2012) and players like Shakib are there in IPL. They have had their own tournament BPL. Therefore, they know how to play in ODIs. As far as we are concerned, we are not looking back at 2007. All we are looking at is to express ourselves," Raina said.

Raina stressed that the time spent in Australia gives them an advantage over other teams as they have played a Test match as well as two ODIs at the iconic venue.

"No, we've played Test Matches here and we played against Australia and South Africa. So we've been spending a lot of time in Australia for the last four and a half months now. So it's like we're used to the conditions more than other teams, so we need to just go there and play positive cricket. I?m not thinking what to do tomorrow."

Raina knows that from now on, every game is a do-or-die affair and don't want any slip-up from the team.

"It's a big game for us. This is a quarterfinal. We have to win it. We have to be good in all departments. There's a sense of calm (confidence) in the team because every player is aware of his role. The best thing is that we are not getting carried away. We're disciplined in our approach and at the same time are enjoying each other's success."

The 28-year-old also had a word of caution for the bowlers, who went for some stick in the last two group league games against Ireland and Zimbabwe.

"We need to be more disciplined (in terms of bowling).

Ireland was a tough game. They played really well. At the same time Bangladesh played well against England and other teams, so we just need to bowl well. At the quarterfinal stage, you don't have any margin for error. You just need to do everything right whether you are bowling, batting or fielding."

Raina's off-spin has come in handy and with left-handers like Tamim Iqbal, Shakib al Hasan in the rival camp, he might have to roll his arms for a few overs.

"I think I just look to bowl to left-handers. I just need to give some good overs that my skipper wants from me. At the same time, I need to maintain the pressure because as soon as the main bowler is taking a lot of wickets, my role is to just bowl stump-to-stump line and create pressure so that wickets come from other end."