Brendan Taylor will play for Nottinghamshire in England on a three-year deal which will put his Zimbabwe career on hold -- and there is the possibility that he may never turn out for his country again. 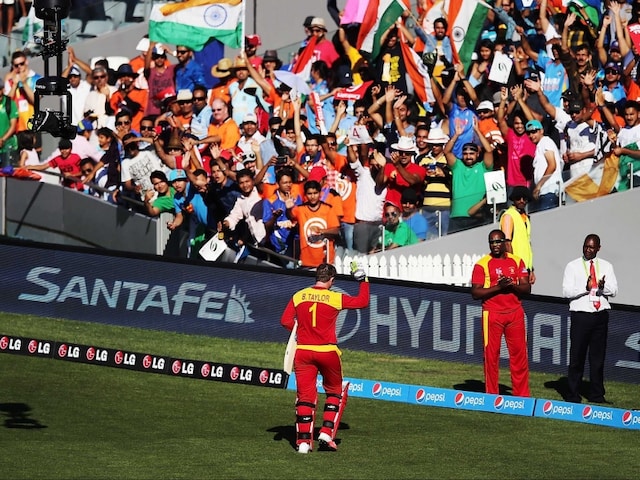 I will miss my teammates: Taylor© Getty Images
Auckland:

Zimbabwe batsman Brendan Taylor says he will miss representing his country after playing his last one-day international against India in Auckland on Saturday but insisted life goes on.

The 29-year-old will play for Nottinghamshire in England on a three-year deal which will put his Zimbabwe career on hold -- and there is the possibility that he may never turn out for his country again.

Asked what he will miss, Taylor replied: "Not wearing the shirt. I think every international player is extremely proud of putting on his country's shirt. (Family Prompted to Retire: Taylor)

"I will miss my teammates and the camaraderie that we have, the good and bad times we go through.

"It's been 11 years and I wouldn't change it for anything. There have been special times through good and bad," said Taylor, who smashed a brilliant 138 in his team's 287 all out against India in their concluding World Cup Pool B match at Eden Park on Saturday. (Taylor Hopes Zimbabwe Won't Miss Him)

Suresh Raina ruined Taylor's farewell party with an unbeaten 110 as defending champions India overhauled their target with eight balls to spare for a six-wicket win.

"Definitely it's a sense of sadness and sense of disappointment the way we have gone about this tournament," said Taylor of a Zimbabwe side who won only one of their six games.

"Sad because I am leaving my teammates and leaving my home country for a number of years. That is always going to be difficult to comprehend but I think life goes on and you take different challenges and choices but it's a positive one."

Taylor hoped he matures into a better cricketer in England.

"It's a positive decision that I have taken and I am looking forward to it being a good ride and hopefully I can have some decent successes there and try and become a good cricketer."

When Taylor was leaving the field, Zimbabwe and Indian players gave him a warm send-off, which Taylor said was touching.

"It was nice from so many Indian players (Shikhar) Dhawan, Virat (Kohli) and Suresh (Raina) came to me and that was touching coming from so many established players. It was a nice gesture.

"My teammates also wished me well and thanked me for my contribution and it was enjoyable, it was pretty tough to swallow but it was good."