Australia v Pakistan - the most consistent team is up against the most inconsistent one. The Australians have been in sparkling form but all their good work could be wiped out if Pakistan decides to turn up at Adelaide.

Australia v Pakistan - among the entire quarter final pack, this game has to be the most interesting. The sides aren't evenly matched, yet the third quarter final of this ICC World Cup is a fifty-fifty game. While the scales are slightly tipped towards Australia, Pakistan on a roll is a very dangerous proposition. (Pakistan Ready to Cope Without Irfan)

The Australians have been in sparkling form and barring New Zealand, no other team has even come close to competing with them. The Michael Clarke-led side is a well-drilled unit and have destroyed sides on their way to the quarters.

All that good work, however, could be wiped out if Pakistan decides to turn up at Adelaide. They, as usual, have had a topsy-turvy ride but finally, Misbah's men have emerged from their slumber.

It going to be a mouth-watering contest and here are a few battles to look forward to: (Misbah Won't Reconsider Plans to Retire) If David Warner takes off, the game will be over very quickly for Pakistan.

This hard hitting Aussie opener has been in red hot form and has hit 264 runs at average of 66 with a highest score of 178. While Australia would look up to him to get them off to a flier, Pakistan would like to see the back of him early in the game.

With 14 wickets to his name, Riaz has been the spearhead of this Pakistani bowling attack and has been instrumental in turning the tide in favour of his team. He has been lethal at the death but it is his wicket taking ability in the middle overs have taken the wind out of the opposition.

Now with Mohammad Irfan out of the World Cup, Misbah might well think of handing the new ball to Riaz. If he does, the onus on removing the explosive Australian opener might fall squarely on Riaz's broad shoulders. While both have the calibre to change the game with bat and ball, the battle will be between Glenn Maxwell, the hitter and Shahid Afridi, the leg spinner.

Maxwell has found his groove in this World Cup - he's hitting them big with a mind boggling strike rate of 190. He's not just playing his usual cameos but scripting match winning knocks. Listed just below Warner in the run-getters list, Maxwell is set for yet another 'Big Show' against Pakistan.

To stop the mad-Max, Pakistan need their maverick showman - Afridi, the leggie!

Maxwell has a notorious weakness against leg spinners. In the last season of the Indian Premier League, he fell to the wrist spinners in six consecutive innings. With Irfan out of the picture, Pakistan could think about including the young Yasir Shah in the eleven but if they decide otherwise, Misbah would need Afridi to step up.

Afridi has had an insipid World Cup till now and the game against Australia could be his last ODI if Pakistan are knocked out. He hasn't lit up the scene with the bat, neither has he contributed anything with the ball. He came into the tournament with 393 ODI wickets to his credit and sadly, has added only two to that tally. Pakistan need a performance from him and they need it at Adelaide. The wicket will assist him too.

The stage is set and it would be the perfect for Pakistan's biggest 'showman' to unleash himself on the Aussies. 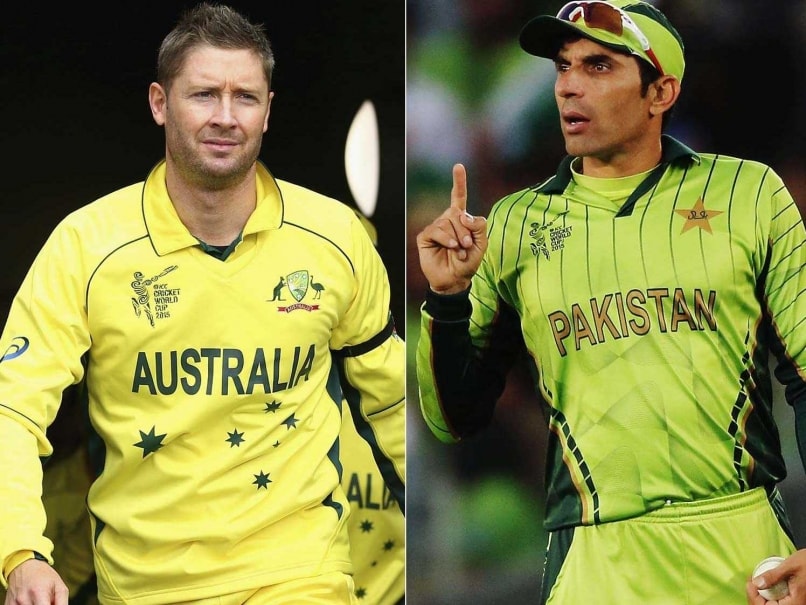 Whatever happens in Pakistan cricket, Misbah-ul-Haq is the man to blame. Misbah is Pakistan's favourite whipping boy, yet they can't do without him - they criticise his captaincy yet need him to lead, they slam him for his 'tuk tuk' batting yet need him to stand tall among the batting collapses.

Michael Clarke, though, doesn't have so much on his plate. In fact, in the ODIs, Australia can win without him. They even started the World Cup campaign with their skipper on the sidelines.

However, Clarke is important for the knock outs. George Bailey does a fine stand-in job but lacks the presence of leader. For that, the Aussies need a top dog like Pup. Clarke's presence alongside Steve Smith stocks up middle-order and his astute captaincy provides Australia an edge on the field. Add his fielding prowess to that list as well.

Both teams need their captains for different reasons. Pakistan need Misbah to lead from the front while Australia need the aura of Clarke to guide them through the back end of the World Cup. 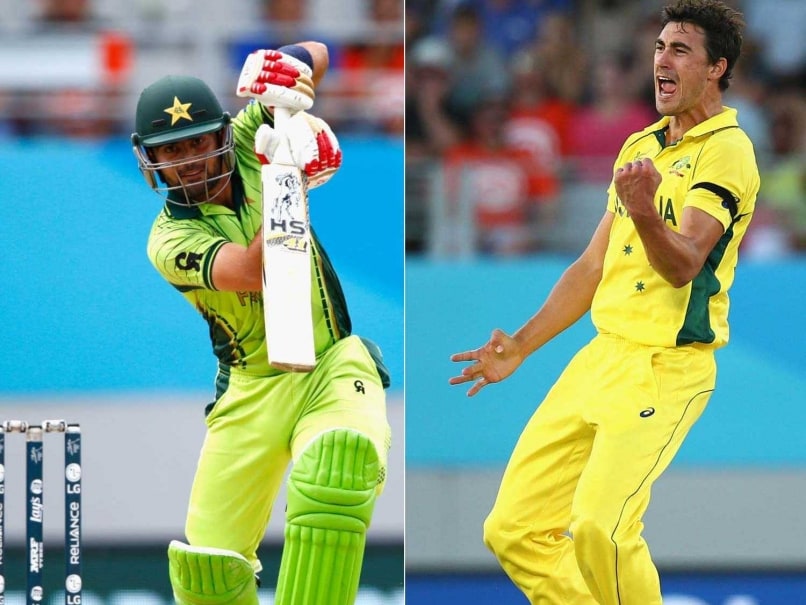 Entire Australia should thank Shane Warne. During the Test series against India, the legendary spinner called Mitchell Starc 'soft'. Right now, Starc sits atop the list of wicket-takers in the World Cup with 16 at a miserly 8.50 apiece.

Once labelled as the "lesser Mitchell", this 25-year-old is swinging the ball both ways, ripping through top-orders and is reminding us of a certain Wasim Akram of 1992. With his performances in this World Cup, he has put his namesake, the feared and nasty Mitchell Johnson, firmly in the shadows.

Ahmed Shehzad though, needs to come out of the shadows and stand up for his side and against Starc and co., he is up against it!

The new ball will slide across him and Shehzad has to resist the temptation of poking out at them. There's no question about the potential of the man but the temperament is still under the scanner. Facing up to the Aussies will be his acid test. He has scored over 200 runs in this World Cup but is yet to play a career defining innings. 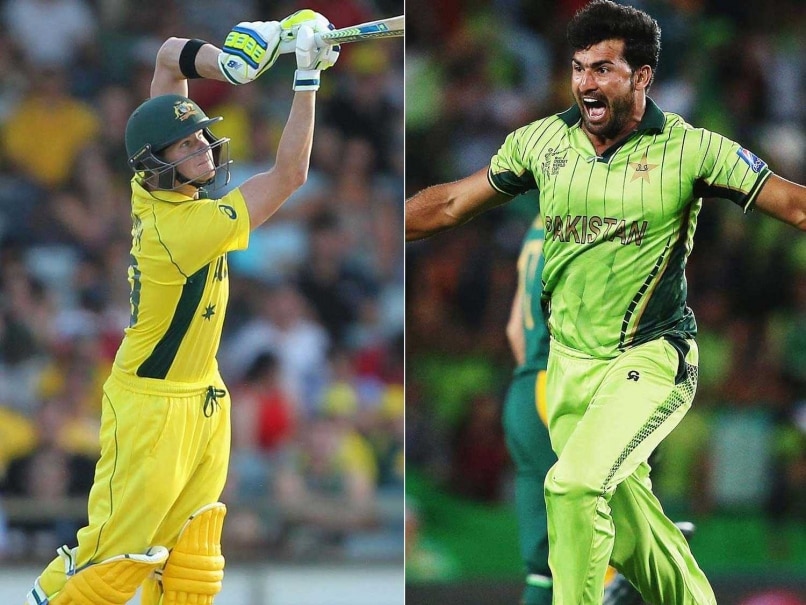 Had Zunaid Khan been fit, Sohail Khan wouldn't have made it to the World Cup. He did and it couldn't have been better for Pakistan. This 31-year-old has been the surprise package. He isn't a tear-away fast bowler but has enough steam to rattle the opposition. A typical work horse, Sohail has become an important cog in Pakistan's bowling wheel.

Against Australia, he will need to rattle Steve Smith.

Smith was always good but since the Test Series against India, he's become the mainstay of the Australian line-up - the fulcrum on which the Aussie batting is balanced on. Till now, with 176 runs at an average of 44, he's been solid.

Smith is invaluable to this Australian side - he's the calm between Warner's rage and Maxwell's madness. He's the glue that holds this Australian batting together and if Pakistan harbour any hopes of progressing to the semis, they need to send Smith back to the hut, as early as possible.