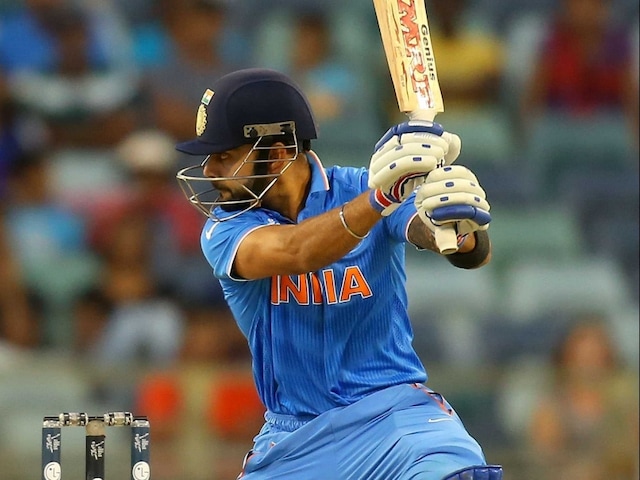 Virat Kohli will look to fire in the semis of the World Cup.© Getty Images

A realistic approach to the game did the trick for the Indian team. They understood very early on in the innings that this Bangladesh attack was not a pushover and that it was a much improved bowling unit. The adjustments to the scoring pattern were made accordingly, which is always a sign of a good team.(Kohli an Example for Youngsters: Whatmore)

The Indian batsmen realised quickly that this was not one of those days when 100 in the first 10 or even 15 overs was going to be possible, as used to be the norm against Bangladesh, owing to the sheer quality in the bowling. It, thus, came to be that the batsmen had to earn their runs in the first half of the innings. But, to their credit, earn them they did and set themselves a base from where to attack. At some point, the bowling had to give and once that happened there was no stopping the Indian batsmen.(Respect Kohli, Says Girlfriend Anushka)

If it was Suresh Raina's turn in the previous game, on Thursday it was Rohit Sharma's match. On the same lines, it should be Virat Kohli's turn in the semi-final. That's the way it should be, one or the other batsman should turn up with a big knock and allow the others to play around. It also helps when the pressure is not any single batsman to deliver each time. At the same time, the failure for Virat may just put enough pressure on him to score big in the semis.

In many ways it was crucial for Rohit to score those runs. He has the class but needs to stay out in the middle for at least 35 overs. Most of his stellar shows have been on Indian soil, which never reflects the reality of batting abroad. But the moderation in approach paid Rohit dividends on the day and has perhaps set him up for bigger challenges.

The skipper Mahendra Singh Dhoni was on the ball again, the manner in which he handled his bowlers being champion stuff. He was very quick to configure when to use which bowler and the right time to change a particular bowler.

The fast bowlers too played their part by getting the ball to take off regularly. The quality of the Indian fast bowlers on these Australian pitches was expected to test the Bangladeshi batsmen and it did. Bowling short was clearly the strategy and it worked wonderfully.

"Ashwin was as usual brilliant but the icing was Jadeja's cameo with the bat at the end of their innings seemed to lift his bowling too, leaving him a more confident person at the end of the game."

Seven wins in a row must have left the team on seventh heaven. Two more wins is all they require to retain the Cup.

Comments
Topics mentioned in this article
Virat Kohli World Cup 2015 Javagal Srinath Cricket
Get the latest Cricket news, check out the India cricket schedule, Cricket live score . Like us on Facebook or follow us on Twitter for more sports updates. You can also download the NDTV Cricket app for Android or iOS.