It will be a clash of 'Captain Cool' vs 'Captain Calculative' when India meets Australia for one last time this summer at the World Cup stage. Irrespective of who wins the battle, generations will remember them as skippers who were successful. 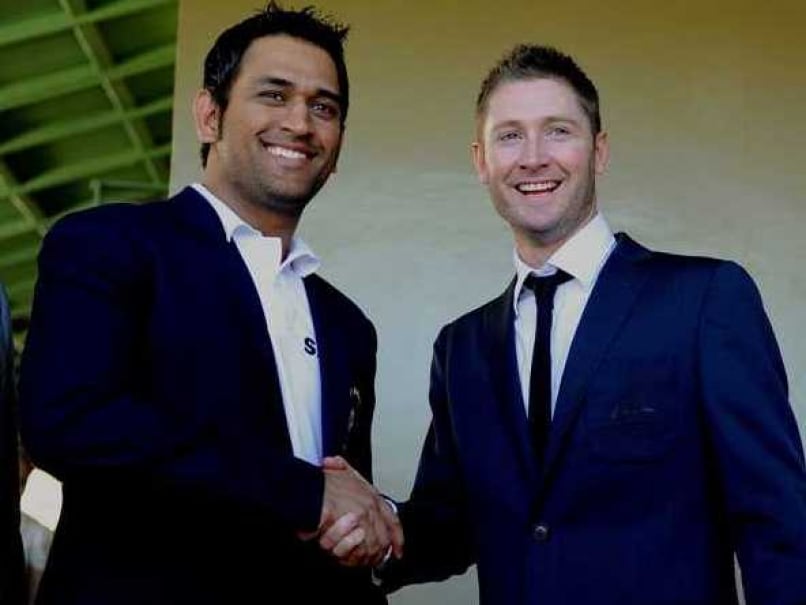 However that piece of stat does not concern the captains involved in Thursday's clash.(Superpowers Collide in Sydney)

What would play out in the middle are their skills, tactics and the ability to mount an offensive. For the last few days the Australian media has engaged in writing about the Dhoni model. How Lt. Col. Mahendra Singh Dhoni, much like an army man, did not deter from his national duty. When an Australian journalist asked why he was not going home to see his newborn daughter, he replied, "Only once I finish my national duty". That put an end to all such queries.(Where Team Dhoni Can Hurt Michael Clarke's Men)

MS Dhoni may have a tempestuous relationship with the Indian media, but within the team, his place is rock solid. Many in cricket circles say that he changed on the night of 2nd April 2011. An excited Ranbir Kapoor had sent out a tweet that night saying that the road in front of Wankhede be renamed after Gary Kirsten. But the team differed. Dhoni's mates say that it was his calm and composed demeanor that got India the Cup. He wielded complete and total control.Â(Where the Aussies can Hurt the Men in Blue)

'Control' is the one word that features prominently on both skippers' art of war strategy manual. Michael Clarke may have lost much of his authority after his skirmishes with Cricket Australia but he still dictates selection strategies, training schedules and even which journalist to take on in a press conference.Â(Australia and India to Continue War of Words)

Dhoni loves to micro-manage. He decides the XI, the support staff, the rest, the training, the practice days, even the design and the colour of the Indian jersey. And unlike Clarke he has the entire team in awe of him.

Clarke draws a lot of support from outside. Spin legend Shane Warne is an unabashed fan of Michael Clarke. Sitting on the other side of the fence are the likes of Ponting, Langer and Katich. Inside the team, he does not have many friends either. He did not have a word of appreciation for Shane Watson even after his match winning knock of 64 off 66 balls against Pakistan in the quarter finals. It is no secret that Clarke and Watson are not friends but it isn't a secret either that many are waiting for Clarke to vacate the captain's chair once the World Cup campaign is done.

Michael Clarke's unpopularity also stems from his wife Kylie Clarke's behavior. She is considered to be a bossy WAG who believes that they are Australia's Beckham equivalent.

The Aussie media says,"He's seen as a bit of a diva who courts celebrity status and isn't as good as he thinks he is." While the skipper's conduct during the Phil Hughes tragedy put him on a higher pedestal, Clarke's baiters say that he did so to garner popularity among the cricket loving public of Australia.

He has drawn bouquets and brickbats for his return from the hamstring surgery to take charge of Australia's World Cup campaign. The Aussie media has predicted that he could bring the curtains down on his ODI career post the tournament.

While there has been intense speculation about MS Dhoni's retirement ever since he called it stumps in Tests, Team Director Ravi Shastri has said in an interview that no such thing is in the offing. In fact he might play for another three to four years. But even Paul the Octopus would not have dared to predict the Indian captain's future simply because he is his own man.

While few would criticise India's most successful captain openly, his former colleagues, who were an integral part of India's World Cup campaign like Sehwag, Gambhir, Zaheer, Yuvraj and Harbhajan know that it wasn't just the selectors who dropped them.

Both know that they have the second most powerful job in their respective nations, only after Narendra Modi and Tony Abbott. Despite the accolades and the arraignment, both are aware that it isn't being a good man, but winning the Cup that counts!

Comments
Topics mentioned in this article
India Cricket Team Australia Cricket Team World Cup 2015 MS Dhoni Michael Clarke Cricket
Get the latest updates on ICC T20 Worldcup 2022 and CWG 2022 check out the Schedule, Live Score and Medals Tally. Like us on Facebook or follow us on Twitter for more sports updates. You can also download the NDTV Cricket app for Android or iOS.