Michael Clarke, whose side beat Afghanistan by 66 runs in the only ODI between the two sides to date in August 2012, was delighted for the Associate team. Afghanistan will play its first-ever match in the ICC Cricket World Cup when it will face Bangladesh on 18 February, 2015 in Canberra. 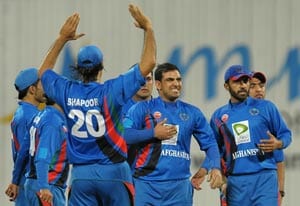 Australian captain Michael Clarke and his New Zealand counterpart Brendon McCullum on Sunday lauded Afghanistan for qualifying for the 2015 World Cup and hoped that the gritty side's maiden experience at the biggest event turns out to be a memorable one.

Afghanistan finished second in the Pepsi ICC World Cricket League Championship last week and along with Ireland progressed to ICC's flagship event that will be staged from February 14 to March 29 in Australia and New Zealand.

Clarke, whose side beat Afghanistan by 66 runs in the only ODI between the two sides to date in August 2012, was delighted for the Associate side.

"It was only last year that we played Afghanistan in the United Arab Emirates. They put up a good fight and showed strong potential," Clarke was quoted as saying in an ICC release.

"To obtain a qualification spot in the ICC Cricket World Cup 2015 is something the squad deserves and we're all really happy for them," Clarke said from Sydney.

Clarke said Afghanistan has not only been a success but an inspiring story.

"Their growth over the past decade as a nation and a cricket side has been an inspiring story to say the least.

"We expect they'll be a challenge for any side in pool A and we're looking forward to playing them on home soil in Perth," he said.

"We look forward to playing against them in the World Cup match in the beautiful city of Napier, and we are certain they will enjoy our country and the tournament," McCullum said.

"The participation of the associate nations is instrumental in the success of developing our game on the world stage and we wish Afghanistan all the best in tournament and also encourage them to enjoy their time in our country."

Afghanistan will play its first-ever match in the ICC Cricket World Cup when it will face Bangladesh on 18 February in Canberra and Bangladesh captain Mushfiqur Rahim said his side was looking forward to that game.

"I am looking forward to facing Afghanistan in the ICC Cricket World Cup 2015. By that time I am sure they will have an even better side with more experience.

"A strong Afghanistan cricket team is very good news for the development of Associates as well as for world cricket."

Mushfiqur said he was pleased to see the progression of the Afghanistan side that boasted some extremely talented cricketers.

"It is exciting to see the progress of Afghanistan. In a short time, the team has come a long way and the successes they have had, including qualification for world events, shows the intent and ability of the players.

"I have had the opportunity of captaining the likes of Mohammad Nabi, Mohammad Shahzad and Gulbadin Naib in the Bangladesh Premier League and Dhaka Premier Division Cricket League, and I have always found them to be keen and quick learners, hardworking and naturally talented," he said.

Comments
Topics mentioned in this article
Cricket Michael Clarke World Cup 2011 Brendon McCullum World Cup 2015
Get the latest updates on IPL Auction 2023 and check out  IPL 2023 and Live Cricket Score. Like us on Facebook or follow us on Twitter for more sports updates. You can also download the NDTV Cricket app for Android or iOS.