Ireland qualify for 2015 World Cup after thrilling tie with Netherlands

Ireland made 268-5 in their innings, but Michael Rippon stole the show for the Dutch by smashing the last two balls of the match for four and six to bring the Netherlands level off their 50 overs. 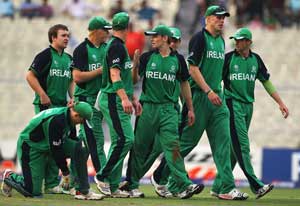 Ireland on Tuesday qualified for the ICC Cricket World Cup 2015 after a dramatic last-gasp tie with the Netherlands.

The Netherlands' number-nine batsman Michael Rippon hit a four and a six from the final two deliveries off John Mooney to snatch a point for his side.

But Ireland's point was good enough to see them top the ICC World Cup League Championship and advance, for the third successive time, to ICC's flagship event that will be staged in Australia and New Zealand in 2015.

After Tuesday's result, Ireland topped the table on 20 points, with nine wins from 12 matches.

There is still one place up for grabs from this tournament with four sides - Scotland, Netherlands, Afghanistan, and the United Arab Emirates (UAE) - all still capable of claiming second position.

The 10 teams will lock horns for the remaining two positions in the ICC Cricket World Cup 2015.

Score summary from the ICC World Cricket League Championship one-day international between the Netherlands and Ireland at Amstelveen on Tuesday: