India vs West Indies: Last Chance for World Champions to Iron Out Flaws Ahead of Title Defence

Defending world champions India start their World Cup preparation at home against the West Indies in the absence of two key players and without the men, who orchestrated the triumph of 2011. 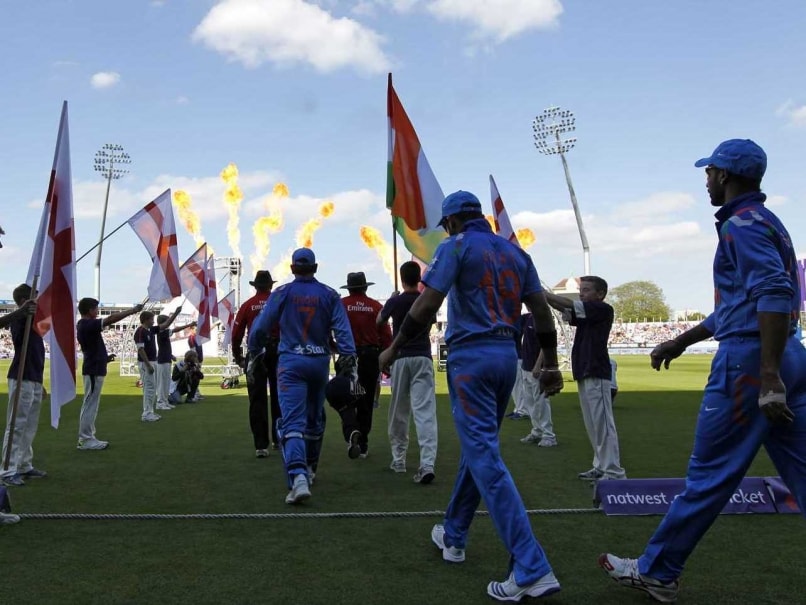 Indian team walk out for one during the one-off T20 vs England.© AFP

The countdown to India's defence of the World Cup has started. When the five wise men of Indian cricket announced a 14-member squad for the first three ODIs for the home series against the West Indies starting this month, they sent out some clear signals. First, there will be no room for Yuvraj Singh, the hero of India's 2011 triumph at home. The man who had battled cancer to score 362 runs and snare 15 wickets, has seen his career spiral downward over the last four years. (Sunil Narine withdrawn from India series)

Neither in contention will be Gautam Gambhir, whose 97 laid the foundation for India's victory while the likes of Zaheer Khan and Harbhajan Singh have long faded into oblivion. India's defence of the world title will be orchestrated by Gen X and for them, here is a last chance to iron out some visible flaws before the showpiece event starts Down Under early next year.

For starters, India's ODI side have seen some mixed times away from home. They lost badly in South Africa and New Zealand, with most of their batsmen struggling to cope with the extra bounce and the bowlers going for plenty of runs. While a home series on flat pitches may not exactly be the answer to some of the problems India are certain to face in Australia and New Zealand come February, the contest against West Indies could be a great launchpad for a young team.

Led by the inscrutable Mahendra Singh Dhoni, the likes of Virat Kohli, Shikhar Dhawan, Ajinkya Rahane, Ravindra Jadeja, Bhuvneshwar Kumar and Mohammed Shami have enough limited overs experience to realize what it takes. Yes, barring Dhoni and Kohli, none of the others selected for the West Indies series were even close to a national call-up in 2011, but solid performances against the Caribbean boys could boost their morale. Runs and wickets ahead of any tournament give players that much-needed confidence, irrespective of the conditions. That will be key to India putting up a strong show at the World Cup - confidence.

The selectors have decided to rest Ravichandran Ashwin, who has been a constant factor for India in all three formats in the last four years besides playing safe with Rohit Sharma; the stylish right-handed was not considered for selection after he failed to recover from multiple injuries.

The contest in itself may not be the most challenging for India - contests against the West Indies rarely are. But what the team-management would like to see is Kohli get back to his run-scoring ways after a string of low scores in England. The man with 19 ODI hundreds struggled to get bat to ball before slamming an aggressive half-century in the one-off T20 International. Can he get back to form at home and get some momentum ahead of the World Cup?

Also of interest will be the openers' form. Shikhar Dhawan was very impressive in the latter half of the England tour as was Ajinkya Rahane. Both these men will be key for India in the World Cup and their performances will be closely observed. Once Rohit is fit again, he will find his way back to the top and the rear will be brought up by the destructive power of Suresh Raina, who is a transformed cricketer after being sidelined earlier this year, Dhoni and Jadeja.

The bowling will of course revolve around Kumar and Shami, who are potent with the new ball in most conditions. Shami will need to cut down on the loose deliveries he tends to bowl every now and then. The series is also a great chance for Mohit Sharma and Umesh Yadav to seal World Cup berths. Dhoni will certainly be grateful for some extra pace resources for what will be a demanding five months from hereon.

The spinners' presence in the side are largely incidental. With Ashwin rested, leg-spinner Amit Mishra and left-arm spinner Kuldeep Yadav were the obvious choices given their recent form. However, one of them could yet make it to the World Cup, with Mishra being the front-runner as the third spinner in the side.

This series is easily the last chance for India to put all their plans and strategies in place. True, they travel to Australia for a full tour later in the year, but by then the World Cup would be too close for the think-tank to think of quick fixes and remedies. Now is the time and the place to do it and what better way than starting at home after a grueling three months spent in the damp and cold weather of England.

Comments
Topics mentioned in this article
India Cricket Team India vs West Indies, 2014-15 World Cup 2015 MS Dhoni Yuvraj Singh Shami Ahmed Bhuvneshwar Kumar Ravichandran Ashwin Virat Kohli Cricket
Get the latest updates on ICC T20 Worldcup 2022, check out the Schedule and Live Score. Like us on Facebook or follow us on Twitter for more sports updates. You can also download the NDTV Cricket app for Android or iOS.