New Zealand manage to cross the finish line with three wickets to spare. The defeat for Bangladesh means the team will face India in quarters.

New Zealand were pushed by Bangladesh but the hosts in Hamilton managed to secure a tense win to remain unbeaten in the tournament. Here are the highlights (Scorecard | Points Table)

McCullum not too pleased with what he saw today. "We were untidy today," he admits. "Looking forward to quarters now."

Stand-in Bangladesh captain Shakib has a smile on his face despite the defeat. "It was a good performance from us today, hope we can continue," he says at the post-match ceremony.Â  "Mahmudullah was great and looking forward to same sort of batting in quarters (against India on March 19 at MCG."

1418: It's all over! New Zealand claim victory by three wickets. It will be India vs Bangladesh in the quarterfinal!

1415: Six and Out! Anderson slams Hossain for a massive shot over deep mid-wicket but the bowler gets his revenge the next ball. Anderson leaves shattered stumps in his wake. It's all happening here.

1411: Dropped! Vettori gets a lifeline as Nasir spills the catch. This despite a fantastic run to get to the ball which had flown from a top edge.

1408: Out! Ronchi finds the fielder at long off to gift Shakib his fourth of the day. New Zealand now six men down and need 42 off 32.

1404: Kiwis 240/5 after 44. Shakib has three overs left and brings himself on. Greeted with a mammoth shot over deep mid-wicket.

1358: Anderson and Ronchi seem quite unwilling to hang around for long. They slam boundaries at will to push New Zealand forward.

1346: Out! Taylor is trapped LBW. His innings comes to an end on 56. New Zealand now five down. Bangladesh sense a comeback. 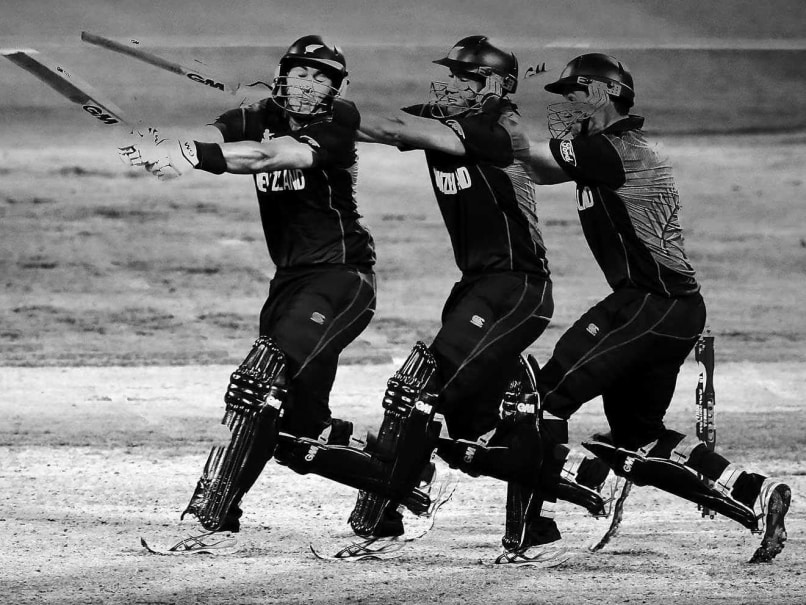 A multiple-exposure sequence of Ross Taylor during New Zealand's match vs Bangladesh.

1325: Out! Elliott goes for an aggressive sweep but finds the fielder. His innings ends after a 34-ball 39.

1249: Century for Guptill! After a rather long medical delay, the batsman gets up, stretches, takes guard and swings his way for a single to complete an 88-ball ton. 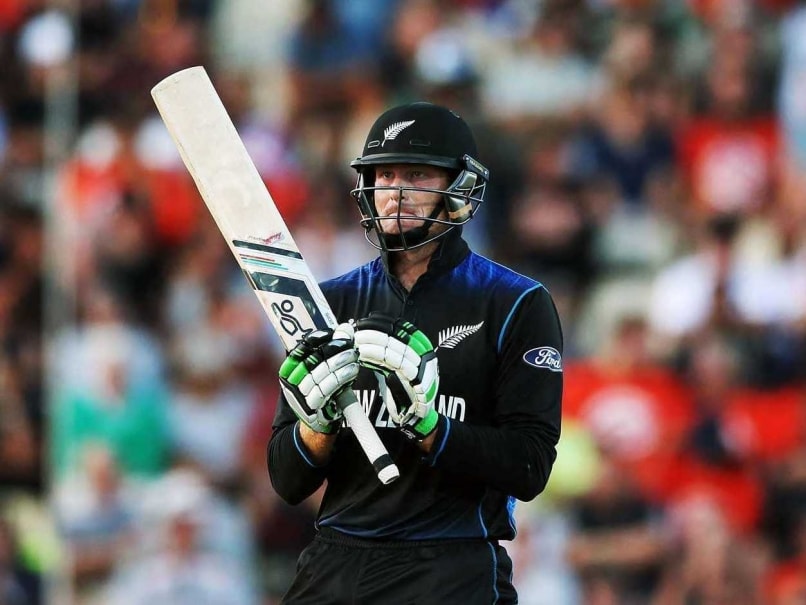 Martin Guptill has been steady and determined in his knock against Bangladesh.

1237: Guptill runs his way to 99 but the last few steps were painful hobbles. He goes down and calls for medical attention. There's pain written all over his face - bad news for Kiwi fans.

1220: New Zealand need another 141 from 25 overs with Guptill closing in on his sixth ODI ton.

1206: There is a sense of urgency on the field. Shakib realises why his team needs a breakthrough and needs one urgently. Guptil and Taylor not giving an inch as pace and spin is thrown at them without any pattern.

1152: A win for New Zealand today would confirm an India vs Bangladesh quarterfinal. As things are moving in Hamilton right now, it looks like the eventual outcome.

1145: Kiwis are back on track and are going about the task in an organised manner. Taylor is feeding Guptill with the strike and both batsmen are playing conventional grounded strokes. 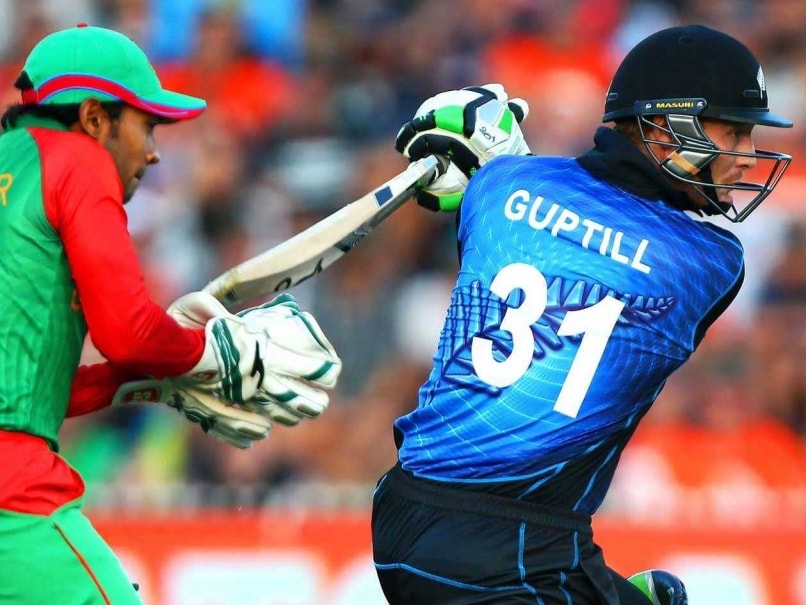 Martin Guptill in action against Bangladesh.

1118: Guptill has been joined by Taylor. The opener is looking as if he has hardly seen any change. Here lies the quality of a veteran of 104 ODIs.

1104: Out! Another for Shakib and Bangladeshi supporters are going wild. Kane Williamson makes his way back with only a run against his name. New Zealand 33/2 after 5 overs.

1055: Guptill on fire! He slams Shakib's second over for 16 runs - an over which sees two sixes and a four.

1045: New Zealand come out for the chase. It's McCullum and Guptill vs Shakib's spin!

* Mahmudullah has scored 128 not out off 123 balls - the highest score for Bangladesh in World Cups, obliterating his own score of 103 vs England at Adelaide on March 9, 2015.

* Apart from Mahmudullah, no other batsman has scored a World Cup hundred for Bangladesh.

* The aforesaid two hundreds are the only ones recorded by Mahmudullah in ODIs.

1015: Did you know? Mahmudullah is now only the second Bangladeshi to score back-to-back tons in ODIs. Shahriar Nafees did it in 2006. Mahmudullah's 128* is also the fourth highest ODI score by a Bangladeshi.

0952: Back-to-back centuries for Mahmudullah! The batsman completes his 2nd ODI ton off 111 balls. And what celebrations! He jumps, makes heart and blows a kiss towards fans in the stands. 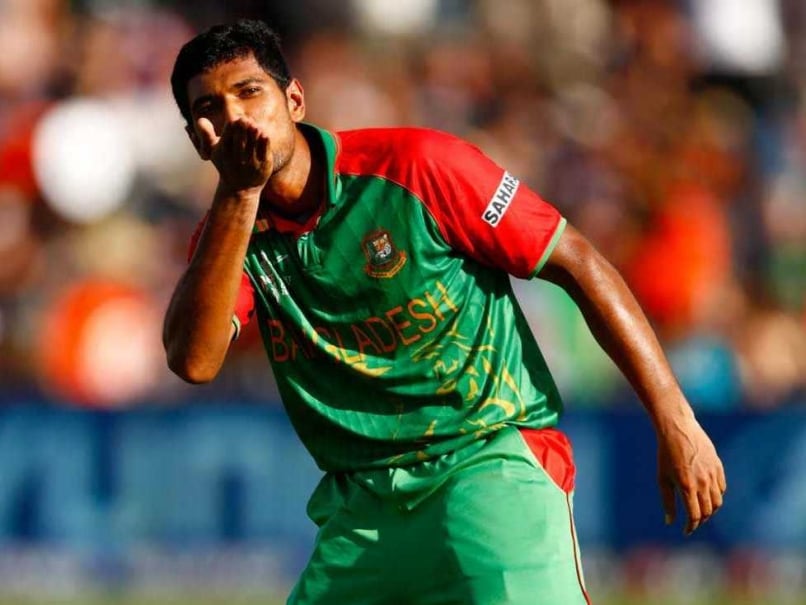 Mahmudullah sends a kiss towards fans after slamming his 2nd ODI ton.

0932: Sabbir's turn to turn the heat on New Zealand. He dispatches Southee for two back-to-back boundaries even as Mahmudullah gets stranded at the other end on 86.

0915: Did you know? No batsman has scored a century against New Zealand this World Cup. Mahmudullah is on 74. 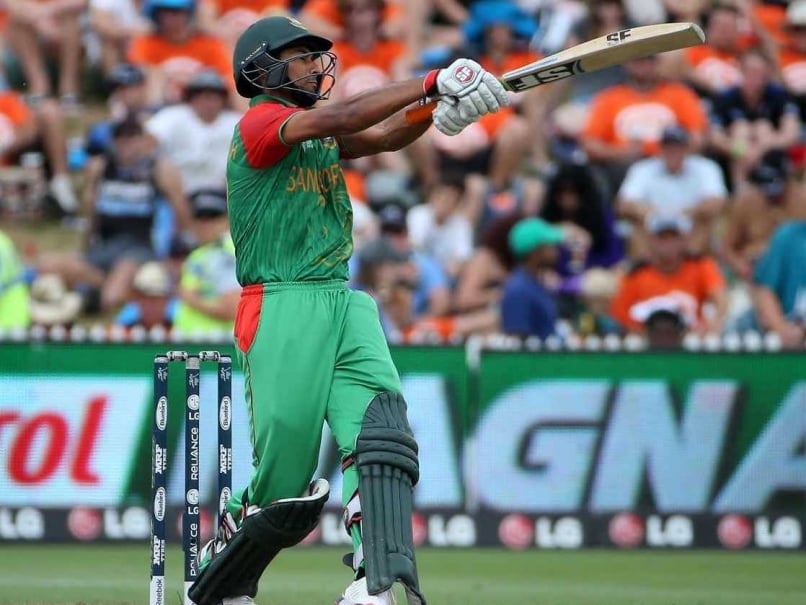 Mahmudullah in action against New Zealand.

0910: Mushfiqur has replaced Shakib and has a already played some powerful shots to the fence. The key would be to keep the fours coming from his end so that the pressure is off Mahmudullah.

0855: Mahmudullah and Shakib combine to blunt Kiwi attack. Both cricketers are experienced campaigners and are batting with confidence under a fully lit afternoon sky.

0842: England opt to field against Afghanistan in Friday's other match. Get the latest from Sydney here.

0834: Fifty for Mahmudullah! The in-form batsman gets his 12th in ODI cricket and having Shakib for company will only bolster his confidence.

0828: Out! Sarkar falls after his half century. He played a responsible knock but an aerial shot down the ground spells his doom. Should have kept it grounded and played the long knock.

0826: Fifty for Sarkar! A responsible innings from the youngster and he gets to a memorable milestone off 54 balls.

0811: Did you know? 22-year-old Soumya Sarkar has no ODI fifties. He is in his 40s right now and looking good. A fifty against the mighty Kiwi bowling attack would do wonders to his confidence.

0759: Earlier in New Zealand vs Bangladesh, McCullum dove to save a boundary. While the commitment was great, he was unable to stop the four and has damaged his hand a bit. 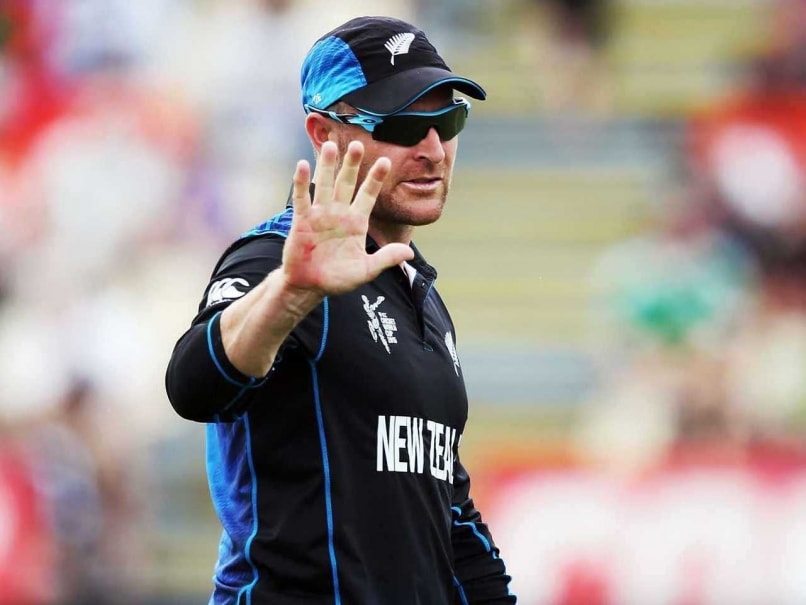 Brendon McCullum has a slightly bleeding hand. He dove unsuccessfully to save a boundary in match vs Bangladesh.

0753: Almost time for the toss between England and Afghanistan! Can the gritty minnows down the Three Lions and add to their miseries? All the latest from the match here.

0731: Positive batting from Sarkar and Mahmudullah. They have targeted McClenaghan and got their runs flowing despite the early setbacks.

0715: Out! Boult gets his revenge. He finds the outside edge of Tamim's bat and it is netted safely in the slips. The batsman scored 13.

0713:Tamim and Sarkar seem to have decided that the best defense is in attacking the Kiwi pacers. The two batsman have smashes some really confident shots to the boundary. Good to see the batsman taking the attack to the bowlers despite being challenged early on.

0704: The first boundary of the innings comes in the eight over. Tamim gets his wrists to flick the ball to the leg-side boundary off Boult.

0654: Out! Kayes is bowled by Boult and Kiwis have their first success of the day. The pressure was building and the batsman finally buckles - the ball going through Kayes' weak defense and crashing into the off stump. 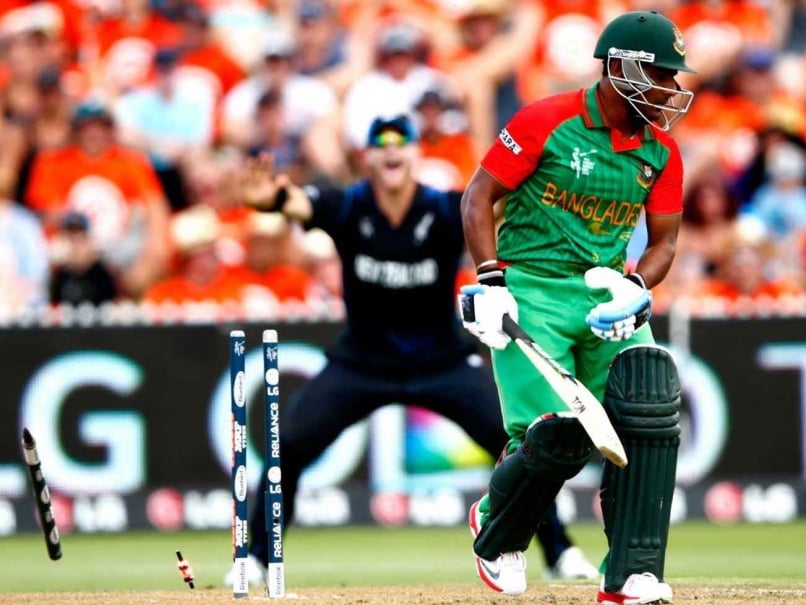 Kayes is bowled by Boult.

0653: After five torrid overs, Bangladesh 4/0. Tamim and Kayes have not looked at ease at all but they remain in the middle - which is the most important thing.

0650: The ball is definitely doing enough to keep the batsmen guessing. Both Southee and Boult are enjoying the conditions and have already managed to find the edge of the bat - only for it to fall short.

0635: Decent support for both teams here. Fans appear eager to see how their teams battle one last time before the knockouts. Of course, it must be heartening for Bangladesh players to once again see their supporters come out with the national flag.

0623: Both teams are out for the national anthem. They get a rousing reception from their fans in the stands.

0615: The pitch has been under a cover for the better part of the last 24 hours. There is a tinge of softness that may be exploited by the likes of Vettori.

0605: Toss! Kiwis win it and McCullum decides he will bowl first. He reckons cloudy conditions in Hamilton will help his bowlers early on. Bangladesh - without Mashrafe Mortaza for the match - look like they would have wanted to bowl as well. Shakib al Hasan though feels his team continues to have a good chance today. 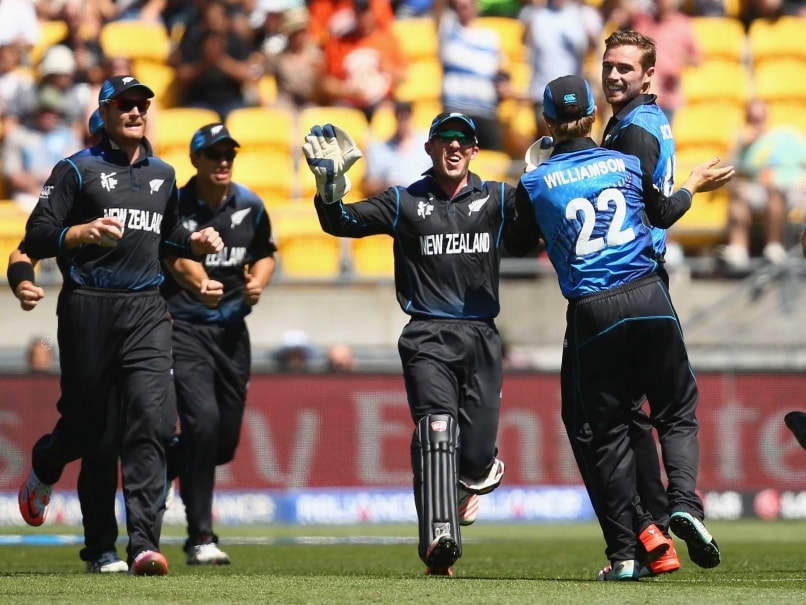 Bangladesh will seek to exploit New Zealand's weakness against spin and halt the co-hosts' unbeaten run when the teams meet in the World Cup in Hamilton on Friday. The Tigers' assistant coach Ruwan Kalpage believes the team can carry the momentum into the game against New Zealand, who have already wrapped up Pool A as group winners.

Meanhwhile, Kane Williamson, Daniel Vettori and all-rounder Grant Elliott overcome from a stomach bug they caught after the team's last match against Afghanistan in Napier on Sunday. However, injured fast bowler Adam Milne is unlikely to play. (Read more)

Bangladesh skipper Mashrafe Mortaza is unlikely to face New Zealand in the World Cup on Friday as he is nursing a calf injury while he also faces the threat of suspension over slow over rates. (Read more)

Bangladesh are currently fourth in the table and if they finish in that position on Friday they will face defending champions India in the quarter-finals.

# After losing 16 of their first 17 one-day internationals against New Zealand, Bangladesh have won all of the last seven completed meetings.

# Against Afghanistan, Daniel Vettori (33) jumped ahead of Shane Bond, Tim Southee and Chris Harris into second place on the list of leading World Cup wicket-takers for New Zealand. He needs four more wickets to pass Jacob Oram (36) at the top of the list.

# Four wickets would also see Vettori pass Kyle Mills as the leading wicket-taker in ODIs between these teams.