New Zealand curised into the semis of World Cup 2015 after a strong all-round show against West Indies. The 143-run win will boost the morale ahead of March 24 clash vs South Africa. Check all the highlights from the match here.

0115: No surprises as Martin Guptill is player of the match. "Work is left to be done, there is no need to get excited just yet," he says at the post-match ceremony.

1257: Holder is in a zone of his own. The 23-year-old captain has taken his side into the quarters but with the exit door right in front, the bowler frees up his arms.

1252: Out! Taylor is the next West India batsman to fall. Southee gets his second. Kiwis can see the finish line and smell the semis. 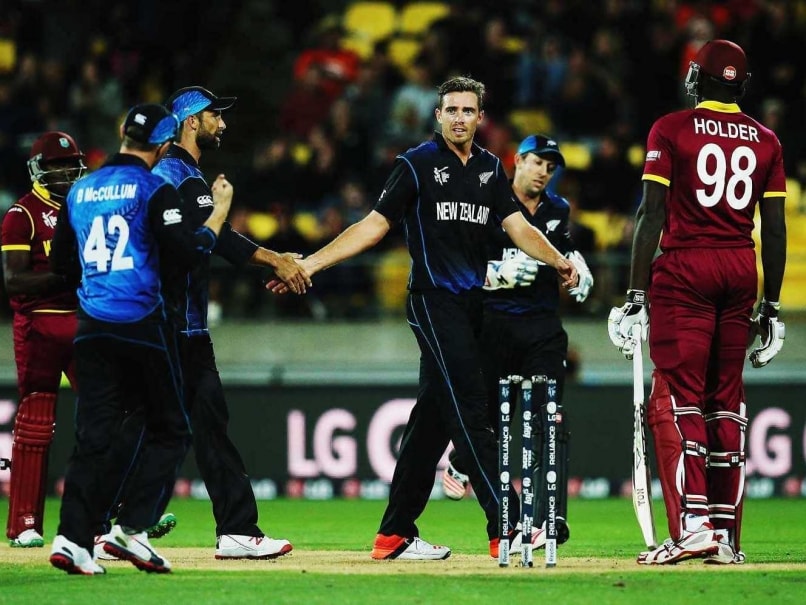 1245: Out! Southee shares the spoils as Russell is clean bowled. Off-stump is uprooted. West Indies eight down.

1242: Holder and Russell getting some forearm exercise. Blade being swung wildly and the ball is repeatedly disappearing into the stands.

1238: Fair to assume it is a cakewalk from here for New Zealand?

The winner of today's match will face South Africa in the semis. New Zealand have defeated Proteas in three of their five previous ODI matches. This does not include their most recent match (October 27, 2014 in Hamilton) which was washed out. 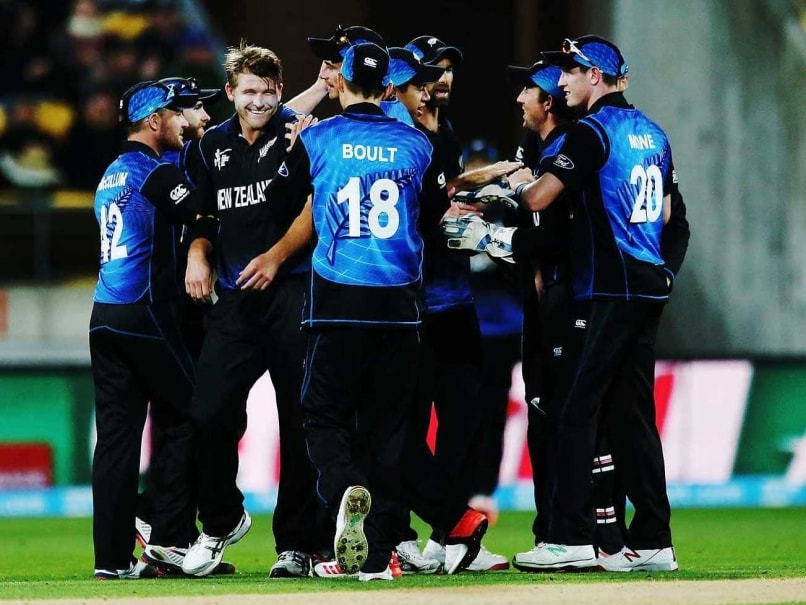 1215: West Indies refuse to fade away against the Wellington dusk. Jonathan Carter and Darren Sammy have hit some lusty blows to bring some joy to their fast-disappearing fans in the stands.

1208: Out! Milne strikes and it is the biggest wicket of the innings. Gayle inside-edges a pacey delivery and is bowled. 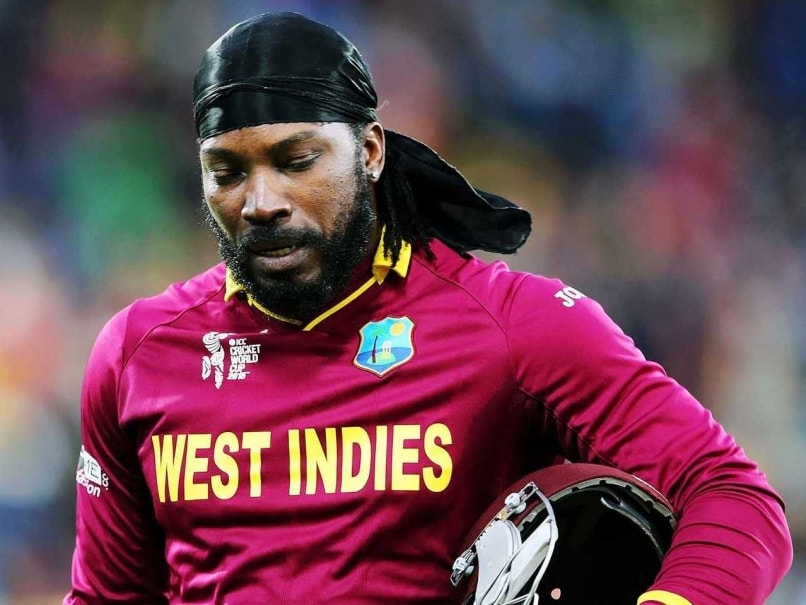 Chris Gayle walks back after being dismissed by New Zealand.

1140: Gayle is playing his natural game despite the flurry of wickets. He slaps sixes at will to close in on his fifty. 1132: Out! Samuels falls to a stunning one-handed catch by Vettori at deep point boundary. Wellington erupts as the veteran cricketer showcases his calm fielding abilities in an exquisite catch.

1123: Gayle has taken the onus of making a match of this. He has dispatched Boult for two sixes as well. He is making no difference between how he treats pacers and spinners.

1117: Daniel Vettori into the attack and Gayle slams him for four sixes in an over. West Indies complete 50 runs in 7 overs.

1112: Out! Simmons (12) slams a four against Boult but the bowler has his revenge. An outside edge goes to Guptill in the slips. West Indies 27/2.

1109: Gayle opens his arms and slams a six and a four in the 5th over from Southee. Sign of things to come?

1105: Gayle is slow and steady - just as he always begins his innings. He is batting with Lendl Simmons at the other end.

1054: Out! There goes the first Windies wicket. Charles has been bowled by Trent Boult.

1045: Chris Gayle and Johnston Charles come out for the mammoth chase. They face Tim Southee.

1025: Guptill on his knock today: Feels great but job is only half done. Loving the home support here in Wellington.

1018: Guptill remains unbeaten on 237 and finishes as the second highest ODI scorer ever. New Zealand post 393/6 against West Indies. 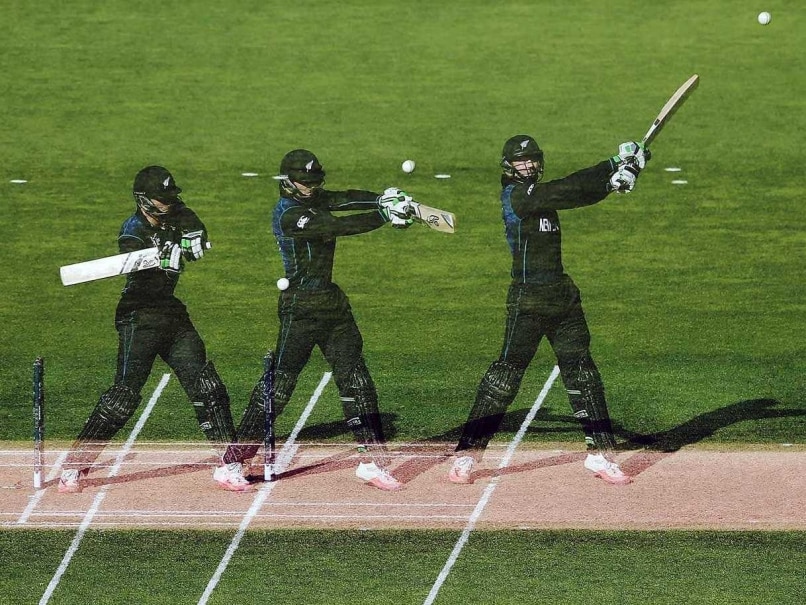 A multiple exposure sequence of Martin Guptill of New Zealand hitting a six vs West Indies.

1013: Out! Luke Ronchi falls to Taylor but West Indies players hardly celebrate. The action is at the other end.

1006:200 for unstoppable Guptill! He becomes the first Kiwi to complete a double ton. Off goes the helmet, up go the hands and Guptill the great, enjoys every bit of the moment.

0942: Out! Anderson falls to a slower delivery from Russell. He scored 15.

0937: Big hitting from Guptill has almost reduced West Indies players to mere audiences - just that they aren't having a good time unlike most in the stands.

0934: Factoid - Martin Guptill now the only Kiwi batsman with two scores in excess of 150 in ODIs.

0932: Did you know? Guptill is the only batsman ever to score more than 150 in a World Cup knockout match. Adam Gilchrist's 149 against Sri Lanka in the 2007 World Cup final was the previous best.

0922: Corey Anderson is the new man at the crease.

0920: Out! Taylor is run-out. He was at the non-strikers end and dashed off for a single only to be sent back. Not in time though! He scored 42.

0902: Even as Guptill steals the limelight, Taylor has eased into his 40s and is giving good support to his partner.

0850: Century for Guptill! That is his seventh overall and second consecutive ton. It took him just 111 balls to reach the milestone. 0840: Kiwi fans are cheering on louder than they have ever before as Guptill is cruising towards the three-figure mark.

0830: Dropped early into the innings, Guptill has ensured that West Indies regret the blunder. 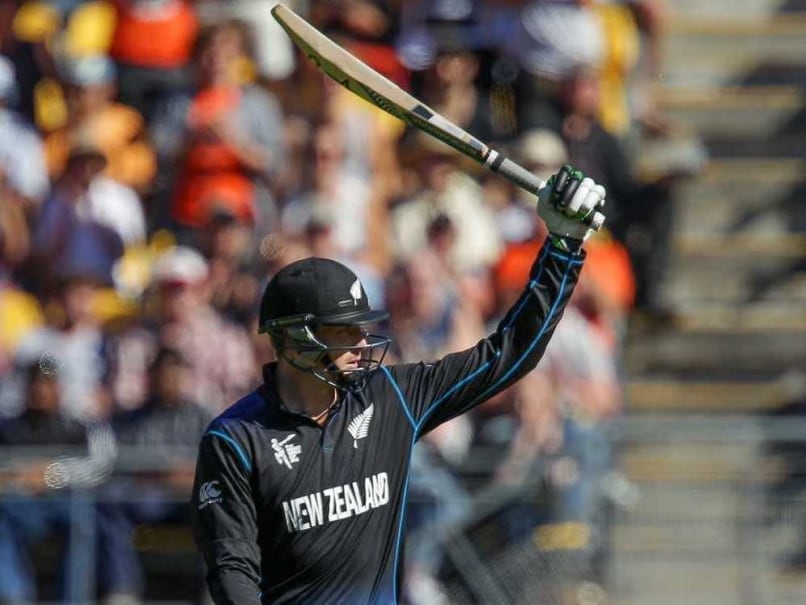 Martin Guptill celebrates after reaching his fifty vs West Indies.

0743: Out! Williamson is dismissed for 33. Russell bowls it short and wide, the ball looked as if it stopped on the batsman. He gives a simple catch to Gayle at short cover.

In this edition, 400 sixes have already been struck! That's one every 57 balls.

0708: Holder brings in Benn for his spin in the ninth over. That may well be a brave move as Guptill looks well set to dominate WI from here with sensible batting.

0703: Kane Williamson has joined Guptill in the middle. He has scored 183 runs from his six World Cup 2015 matches so far. With a best of 57, he would be looking for a big knock to help Kiwi fans recover from the shock of losing their captain early.

0655: Out! What a sensational catch from Holder. Running back after McCullum skies the ball, Windies captain completes a beautiful catch to remove his counterpart on 12. 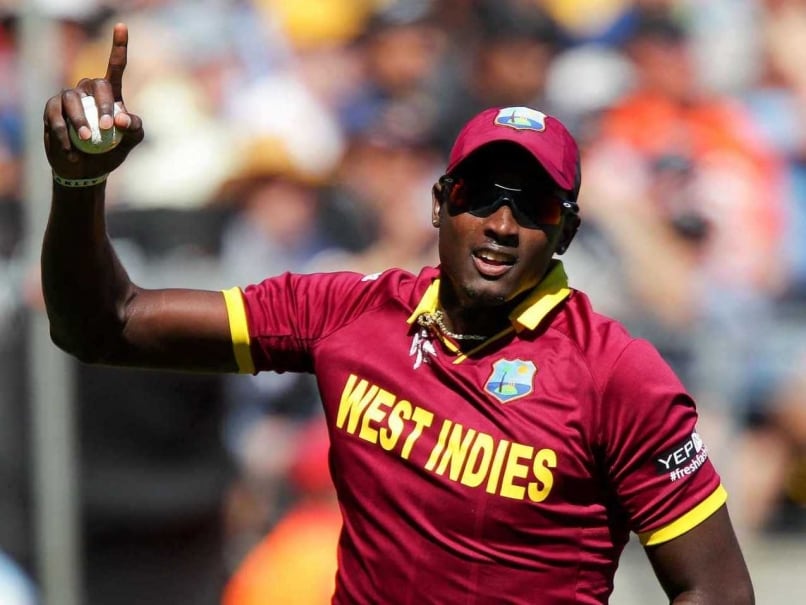 0645: Four and a six! McCullum targets Holder and smashes him in what was an expensive fourth over for Windies.

0634: Dropped! Guptill gets a lifeline in the first over. He looks to flick one down leg side but the shot goes low and straight to Samuels who spills it at square leg.

0630: McCullum and Guptill open for Kiwis. They will face Jerome Taylor.

0614: The pitch at Wellington is a good one for ODI and has just a little bit for the pacers. However, batsmen can expect to put up a total in the region of 300 which would be a challenge for the team batting second. 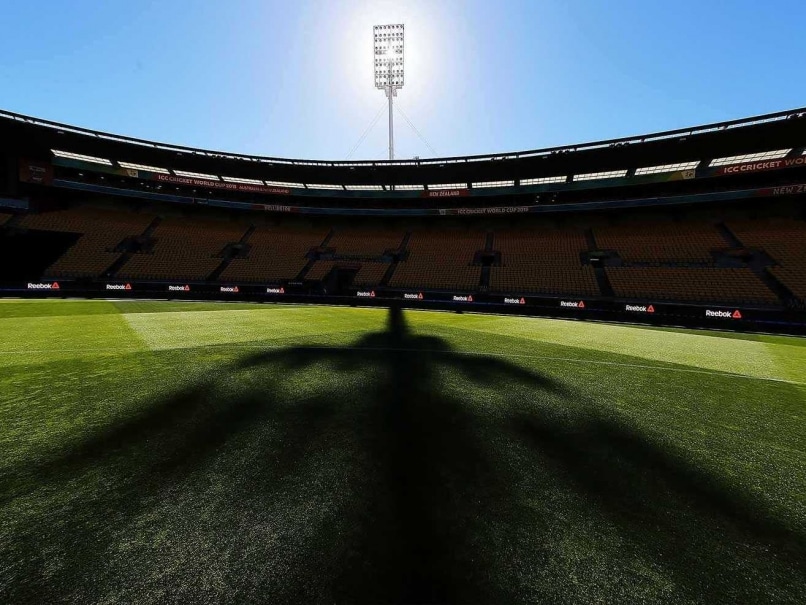 A view of the Westpac Stadium in Wellington before the start of New Zealand vs West Indies match.

0605: Team news is that Adam Milne plays for Kiwis while Windies bring back Chris Gayle and Suleiman Benn.

0603: Windies captain Jason Holder is not too disappointed having lost the toss. "It is fine. We will look to bowl to our strengths," he says.

0600: Toss! McCullum wins it and New Zealand will bat first at Wellington. "We have had a good few days of preparations and the players are ready for today's challenge," says McCullum.

Both teams have taken contrasting routes to reach the last eight stage with New Zealand winning all their six pool games and West Indies scraping through as the fourth placed team from Group B. An unpredictable West Indies need Gayle for the crucial knock-out game even as captain Jason Holder said a 'final call' on the dangerous opener will be taken not before match day morning. (Read Full Preview) 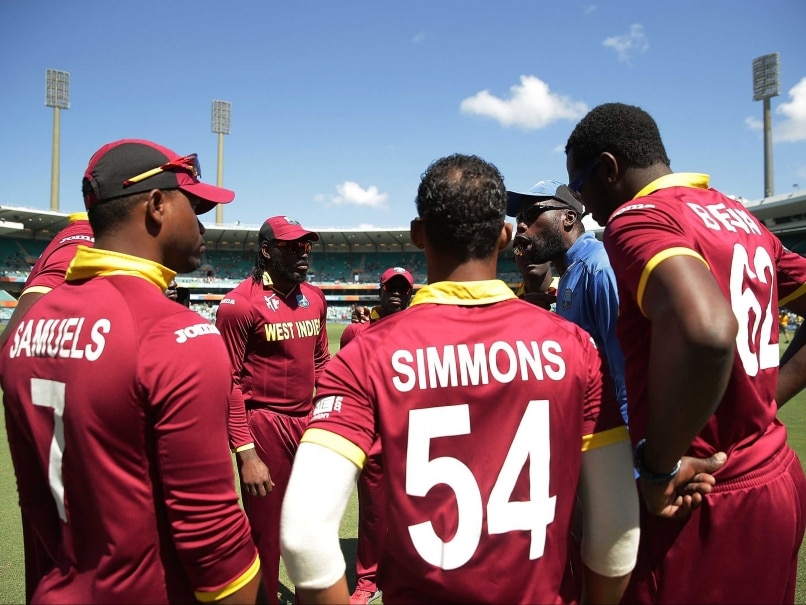 Will West Indies upset the Black Caps on Saturday? 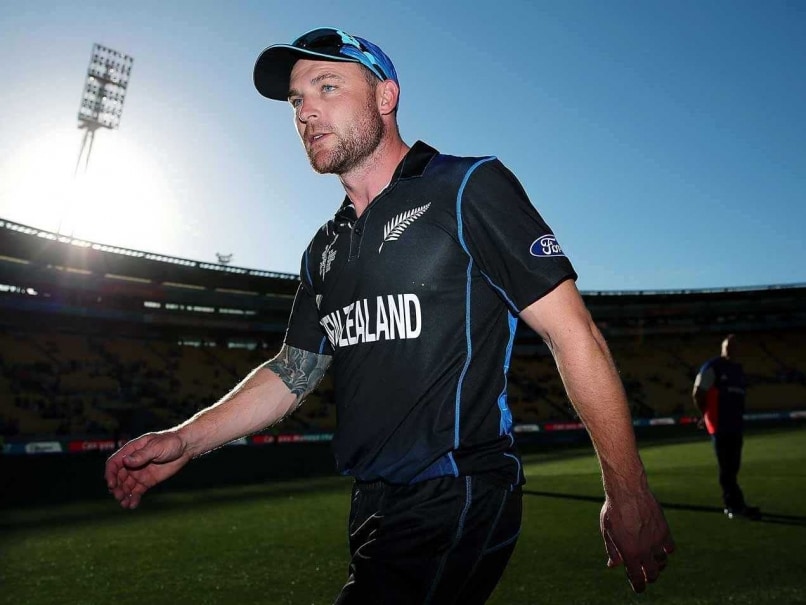 Brendon McCullum has been praised for the manner in which he has led New Zealand this World Cup.

The fearless New Zealand captain holds the key to all aspects of the Black Caps' match blueprint.

He opens the batting with the firm belief he is there to score fast and ease pressure on those who follow. Proving the point, he hit the fastest World Cup half-century on his way to a rollicking 25-ball 77 against England.

His leaping and diving fielding exploits to save ones, twos and boundaries, regardless of any physical cost, has rubbed off on the rest of the New Zealand side, who pride themselves on being one of the sharpest fielding units around.

McCullum's support for his bowlers, setting aggressive fields and encouraging them to bowl to take wickets has led to three New Zealanders being among the tournament's top ten wicket-takers.

The explosive Gayle can determine the outcome of match single-handedly if he gets away and his 215 against Zimbabwe in the pool phase is the highest individual innings at any World Cup.

With his long reach, excellent hand-eye co-ordination and ease playing both sides of the wicket, Gayle can be a bowler's nightmare although of late the left-hander's form has been inconsistent

He followed his double century with three against South Africa and 21 against India, suggesting to New Zealand he is due another big score again.

Although Gayle is suffering from a long-term back injury, he is expected to play.