The ICC officially launched the 2015 Cricket World Cup which will be held in Australia and New Zealand.

The ICC launched the 2015 World Cup on Tuesday with venues and pools being announced. Here are the highlights from the simultaneous events in Melbourne and Wellington.

7:15 (IST) - And here is the complete list of India fixtures. Get full coverage, latest updates and a lot more from cricket and other sports, here on sports.ndtv.com

6:50 (IST) - India skipper MS Dhoni is confident of securing a win and defending the title. Says team is confident and after winning in Mumbai, India want to retain the World Cup. Read full report here.

6:35 (IST) -The International Cricket Council seem to have hardly left any stone unturned in making this a riveting World Cup with arch rivals placed together. The announcements today only make for an eager wait ahead of the World Cup, 563 days and 9 hours from this very moment!

6: 00 (IST) - The first match of the tournament will be played between Sri Lanka and hosts New Zealand on February 14, at Christchurch.

5:55 (IST) - AND THE POOLS HAVE BEEN ANNOUNCED! BIG NEWS: India and Pakistan in Pool B with SA, WI, Zimbabwe and a qualifier team. Pool A has England, Australia, Sri Lanka, Bangladesh, and two qualifiers

5:50 ( IST) - In Melbourne, Aussie PM Kevin Rudd to lauds New Zealand and cricket. Says he couldn't have picked a better country to co-host the event with.

5: 47 (IST) - In Wellington, PM John Key charms all present. Says he is not attending the event because he is the prime minister of the country but because of his absolute love for the sport. " Cricket is one of New Zealand's favourite sports. That we can co-host the 11th World Cup is a great opportunity for us. We have a perfect track record of successfully hosting big sporting events.

5: 40 (IST) - While India's Kapil Dev and Sri Lanka's Sanath Jayasuriya are present with Aussie PM Kevin Rudd in Melbourne, Waqar Younis of Pakistan is over at Wellington for the event which has Prime Minister John Key in attendance.

5: 34 (IST) -Over in Melbourne, it's Dennis Lillee - the great Aussie legend who gets the event underway.

5: 30 (IST) - Sir Richard Hadlee gets the event underway at Wellington. Speaks about how the game has changed over the years and promises that it will only get bigger and better in New Zealand. "We are ready to welcome the world," he says.

5:25 (IST) - There is a huge buzz in Melbourne and Wellington as just minutes are left for the event to start. The announcement will take place in both cities simultaneously.

5:10 (IST) - Look at the calendar, mark the dates, get your tickets and enjoy the biggest spectacle in international cricket as the ICC gets set to announce the schedule of the 50-over World Cup today. 2015 is going to be a tremendous year for cricket fans all over and today - almost two years in advance - they will know exactly where and when to book their passes for live cricketing action.

* The ICC Cricket World Cup 2015, which is being jointly hosted by Australia and New Zealand, will officially be launched through a live global broadcast from the Wellington event.

* The pools, venues and fixtures of the ICC Cricket World Cup 2015 will be announced simultaneously in Melbourne and Wellington at 0000 GMT on Tuesday 30 July. Read

* The tournament was last played in both countries in 1992 and has become one of the most viewed international sports events in the world. In 2015, Australia and New Zealand will host 49 matches over 44 days in February and March.

* The ICC Cricket World Cup 2015 to be held in Australia and New Zealand will be the 11th edition of the tournament. This will be the second time these two countries have hosted the world cup, the first being in 1992. Pakistan were the victors on that occasion when they beat England by 22 runs in Melbourne.

The 2011 edition was held in India, Sri Lanka and Bangladesh. Bangladesh were given the chance to co-host when matches to be played in Pakistan were shifted due to security concerns. India won the tournament with a six-wicket win over Sri Lanka in Mumbai. The game that pulled in the maximum viewership in and out of the stadium was the semi-final clash between India and Pakistan in Mohali. India beat Pakistan by 29 runs to maintain their unbeaten record against their arch-rivals in World Cup cricket. The major upset of the tournament was Ireland's 3-wicket win over England in Bangalore when Kevin O'Brien's 113 off 63 balls took the minnows to a famous victory. 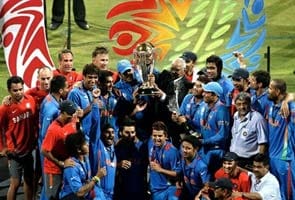 India won the final in Mumbai chasing down a target of 275 with 6 wickets and 10 balls to spare. Gautam Gambhir top-socred with 97 and MS Dhoni's 91 not out took India to victory. (See India's win in Pics)

The match that brought the most viewership in the tournament was none other than the semi-final between India and Pakistan. A mouth-watering contest in which the Men in Blue triumphed over their arch-rivals by 29 runs in Mohali. (See best Images from that match) (Read match report)

14 teams took part in the 2011 World Cup. They were divided into two groups. Group A consisted of Pakistan, Sri Lanka, Australia, New Zealand, Zimbabwe, Canada and Kenya. Group B was made up by South Africa, India, England, West Indies, Bangladesh, Ireland and Netherlands.

The other semi-final between Sri Lanka and New Zealand was relatively one sided. Sri Lanka chased down a target comfortably with 5 wickets in hand after the bowlers had restricted the Kiwis to 217. (See in Pics Sri Lanka's entry into the final) (Also see Sri Lanka's road to the final)

The four quarter-finals were played in contrasting fashion. Pakistan cruised past the West Indies by 10 wickets in the first game after their bowlers had bowled them out cheaply. (West Indies blown away by Pakistan)

In the second game, Australia bolstered by Ponting's 104 posted 260/6 against India but the hosts romped home by 5 wickets mainly thanks to fifties by Tendulkar, Gambhir and Yuvraj. (India bring Aussie dominance to an end)

The last quarter-final was a one way show as Sri Lanka chased down England's score of 229/6 with both openers Dilshan and Tharanga smashing centuries to give the Lankans a 10-wicket win. (England wilt under the might of Sri Lanka) 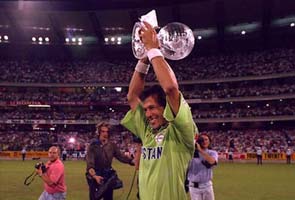 The 2015 edition shall also see 14 teams take part yet again. 10 of them constitute the Test playing nations while the other four spots are taken by the associate members who have to qualify. As of now the Ireland have qualified. The remaining 3 spots shall be determined by one team from theÂ  2011-13 ICC World Cricket League Championship and two from the 2014 Cricket World Cup Qualifier.

The World Cup has grown as a media event with each tournament. The International Cricket Council has sold the rights for broadcasting of the 2015 Cricket World Cup for US 2 billion dollars to ESPN Star Sports and Star Cricket. The event has a potential viewing audience of 953 million people, with some 800 million of those in Asia alone. According to Strong, the Local Organising Committee (LOC) wants to make the tournament the most fan-friendly event of its kind and take cricket to a wide range of communities throughout Australia and New Zealand.

When Australia and New Zealand bid for the 2011 Cricket World Cup in 2006, they said that it will see a 50-50 split in games with the final still up for negotiation, but the battle between Melbourne and Sydney had already begun to host the final. Other potential venues in Australia include Brisbane, Perth and Adelaide. New Zealand have their regular cricket grounds namely Wellington, Hamilton, Auckland, Dunedin, Auckland and Christchurch to host games. In the 1992 edition the Kiwis played all matches at home and they thrived in familiar conditions with 7 wins from 8 games to top the group. Australia finished fifth narrowly missing out on a place in the semis. 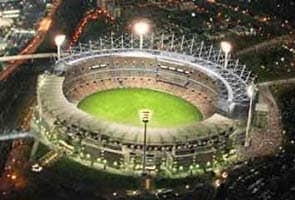 The format in 2015 is the same as that of 2011. 14 teams shall participate. 2 groups of 7 teams each shall play mong themselves and the top four from each group will enter the quarter-finals. The topper of one group shall play the fourth ranked team of the other and vice-versa.