Venkatapathy Raju, who played in two World Cups (1992 and 1996), said there's nothing wrong in the system but there's a strong need to organise 'A' tours to make a pool of reserve players for Team India. 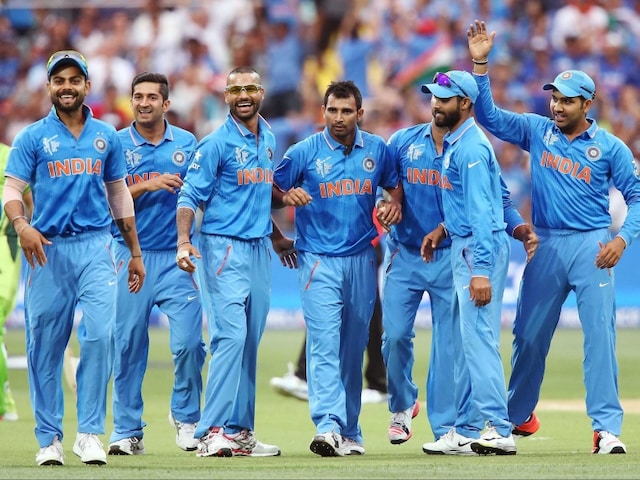 India won 7 out of 8 games in the World Cup.© Getty Images
Kolkata:

Taking into consideration the Indian cricket team's gruelling international schedule, former national selector Venkatapathy Raju on Tuesday said the BCCI must address the issue of player burnout and should have a back-up team of bowlers.(Spot and Groom Young Bowlers: Vengasarkar)

The 2011 ODI world champions had a dream run in the just-concluded edition of the mega event till the semi-final where they stumbled against Australia.(Virat Kohli Must Play More Responsibly: Prasanna)

The former India left-arm spinner, who played in two World Cups (1992 and 1996), said there's nothing wrong in the system but there's a strong need to organise 'A' tours to make a pool of reserve players.(India Should Start Preparing for World Cup 2019: Chandu Borde)

"The amount of cricket the Indians play is a lot more than others, so there's always an issue of burnout. We should have a back-up of at least five-six pacers and three-four spinners ready all the time.

"We have some key players like Ashwin and Jadeja who play the longer as well as the shorter versions. So there's always going to be a tendency to burn out. We should have a vision to address the issue," Raju said.

He added, "We have a long domestic season with Ranji Trophy being the benchmark of national team selection. There's nothing wrong in that but it would always be nice to have three-four A tours in between. I'm sure our players would benefit a lot. If you see, in 2007-08 we had a lot of India A tours," he said.

Jadeja recovered from a shoulder injury ahead of the World Cup but the India all-rounder's form was a letdown.

The former India left-arm spinner felt that it was tough for the Saurashtra all-rounder to return and start performing straightaway.

Citing the example of Jadeja, Raju reiterated the need to have a back-up plan ready at all time.

"He was a match winner before playing the World Cup but his form dipped. It was disappointing to see that. But it does happen when you make a comeback. It's difficult to adjust to the top level," the 45-year-old said.

Raju, who was part of the 1992 World Cup team that failed to make the knockout stage, credited the current team for the massive turnaround after the debacle in the Test and Triangular series.

"Everybody has written us off, but Dhoni's men did justice to their billing making the last four with an all win record, that speaks for itself."

On the Aussies' invincibility, he said: "The Aussie bowlers had a plan in place for every Indian batsman and they executed it to perfection."

He also felt that the long gap between India's matches might have broken the rhythm.

"Sometime the momentum gets broken with a long gap, you never know. We have had long, long gaps, sometimes stretching a week."

In the World T20 next year in India, the 2007 champions would once again be in the reckoning, felt Raju.

"They are supposed to do well when the (T20) World Cup will be held in India. I'm sure they will once again be in the thick of things and rank among the top four teams."

Hailing Mahendra Singh Dhoni's captaincy, he said: "Every captain has their own style of play and Dhoni sticks to his style and it has worked for him many times. He is the one who has given us success in the T20 and ODI formats in recent times."

Comments
Topics mentioned in this article
India Cricket Team World Cup 2015 BCCI Venkatapathy Raju Cricket
Get the latest Cricket news, check out the India cricket schedule, Cricket live score . Like us on Facebook or follow us on Twitter for more sports updates. You can also download the NDTV Cricket app for Android or iOS.