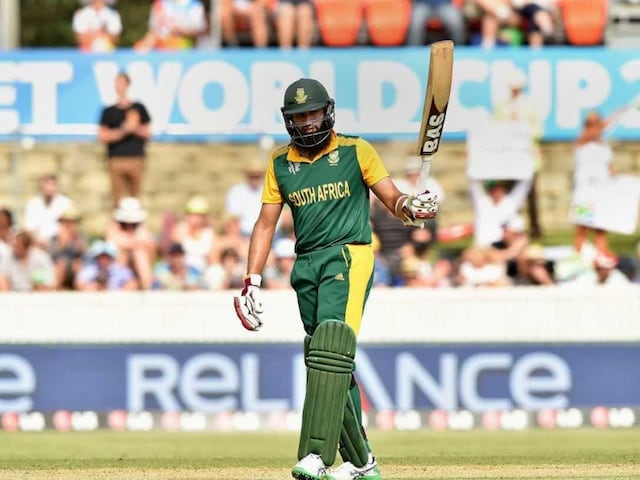 Amla blazed away to 159 after being dropped on 10© AFP

South African batsmen have made it a habit of smashing ODI records in recent times. After AB de Villiers slammed the fastest fifty, hundred and 150 in the space of a month, Hashim Amla broke Virat Kohli's record to become the fastest to reach 20 hundreds. (Complete World Cup Coverage | Scorecard)

Amla, who was dropped by Ed Joyce off the bowling of Kevin O'Brien on 10, motored along against a hapless Irish attack as South Africa took control to race away to his 20th hundred in a mere 108 innings. Indian batting star Kohli had taken 133 innings to get to the landmark. Kohli, five years younger than the 31-year-old Amla, has played 153 ODIs, while the Proteas opener has now played 111 ODIs.

Amla eventually fell for 159, ironically caught by Joyce at long-off.

Amla has been a prolific scorer for the South Africans but his form in the first two matches in the World Cup was worrying. He had managed 11 against Zimbabwe in their opening clash - his early dismissal triggered a collapse before the duo of JP Duminy and David Miller revived the Proteas.

There was another failure waiting, this time against India. Chasing 308, Amla was expected to provide South Africa with a rollicking start, but he perished to the medium pace of Mohit Sharma for 22. However, he was determined to turn the tide in his favour and responded with an important 65 against the West Indies in initially challenging conditions.

The match against Ireland gave Amla the perfect opportunity to finally get a hundred in the ongoing World Cup and stamp his class, albeit against a lesser opposition.