The side from the sport's second tier will receive a USD 1 million (624,000 pounds, 738,000 euros) preparation fee from the global governing body, the International Cricket Council, ahead of the tournament in Australia and New Zealand. 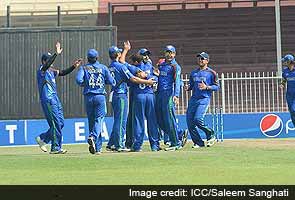 Afghanistan's remarkable success in qualifying for the 2015 cricket World Cup has netted the country a multi-million dollar windfall.

Afghanistan, playing in the fifth tier of international cricket just five years ago, booked their place in the game's global showpiece by beating Kenya by seven wickets in Sharjah on Friday. (See match pics)

And on Saturday the financial rewards triggered by their maiden appearance in the cricket showpiece became apparent. (Read: Afghanistan's big leap in international cricket, qualify for 2015 World Cup)

The side from the sport's second tier will receive a USD 1 million (624,000 pounds, 738,000 euros) preparation fee from the global governing body, the International Cricket Council (ICC), ahead of the tournament in Australia and New Zealand. (Read: Afghanistan seek 2015 World Cup boost from India, Pakistan)

That comes on top of the USD 422,000 awarded to the Afghanistan Cricket Board (ACB) by the ICC Board in April of this year as part of its Targeted Assistance and Performance Programme (TAPP), aimed at raising playing standards.

In 2014, the top ICC Associate and Affiliate Members - including Afghanistan - will also receive approximately USD 750,000 in base support through the ICC Development Funding Policy.

And according to the ACB Chief Executive Officer Mohammed Noor, there is the potential for further funding that could amount to as much as USD850,000 from the country's government and sponsorship agreements from domestic and international businesses eager to ride the wave of Afghanistan success.

"All the money we will receive will allow us to develop the game even more, and it will also allow us to be as ready as we can be for the ICC Cricket World Cup," said Noor.

"We have already begun working on our plans and we are looking at a three-month camp for the players ahead of the tournament."

And those sponsorship dollars could multiply thanks to the success of broadcast coverage of Afghanistan's latest matches.

The ACB's coffers may be swelled still further if the team can qualify for next year's World Twenty20 in Bangladesh, with the qualifiers for that event in the United Arab Emirates in November.

If Afghanistan can secure a place at that tournament - and it has qualified for the past two, in the West Indies in 2010 and Sri Lanka in 2012 - the ACB will receive an additional USD 250,000.

Meanwhile Noor revealed that among the fans back home watching Afghanistan clinch qualification from Sharjah on Friday was the war-torn country's leader, President Karzai.

"It has been great for people back home to see the matches because it means they can now see the boys in action," said Dr Noor. "The cricket team is now recognisable on the streets of Afghanistan.

"I understand His Excellency President Karzai was also watching Friday's match and the coverage helps the profile of the game throughout our country and throughout our region," he added.

"Cricket is already the most popular sport in Afghanistan and our idea, with the help of this extra money, is to further improve and develop so we can get even more participation in the country," said Noor.

Comments
Topics mentioned in this article
Cricket Afghanistan World Cup 2015 Ricky Ponting Waqar Younis
Get the latest updates on India vs South Africa and check out  Schedule, Results and Live Score. Like us on Facebook or follow us on Twitter for more sports updates. You can also download the NDTV Cricket app for Android or iOS.