Celebratory gunfire tore through the air in the eastern city of Jalalabad as Afghanistan beat Kenya to qualify for the 2015 World Cup. 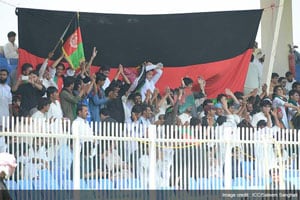 War-torn Afghanistan erupted in wild celebrations on Friday as its cricket team beat Kenya to qualify for the 2015 World Cup, just 12 years after the game took hold in the wake of the Taliban's fall.

About 3,000 fans packed onto the field at Kabul's only cricket stadium to watch the match on a big screen, with noisy chants and dancing marking each boundary as Afghan batsmen carried the side to an easy victory in Sharjah. (In pics: Afghans rejoice)

Celebratory gunfire tore through the air in the eastern city of Jalalabad, but there was no immediate repeat of the nationwide explosion of bullets that met Afghanistan's recent victory in the South Asian Football Federation cup.

"Tears come out of my eyes because of my happiness," Zakir Mohammadi, 23, told AFP, the national flag draped across his shoulders.

"I am speechless and can't express myself. This is a great feat for our cricket team and for all Afghans."

Large crowds of supporters also celebrated in the southern city of Kandahar, the birthplace of the Taliban, where police issued strict warnings on the radio before the game that people should not celebrate by firing guns in the air.

"This is a great success for our country. Afghanistan have proved their ability to the world despite 30 years of war," Shahzada Masood, chairman of Afghanistan Cricket Board (ACB), said.

"This shows the talent of our players. They can beat any team on their day despite the limited facilities that they have."

Afghanistan's cricket side has progressed rapidly since the country emerged from the austere rule of the Taliban in 2001, and the achievement makes up for narrowly missing out on the 2011 World Cup.

Tens of thousands of Afghans learned the game in refugee camps in Pakistan after they were forced to flee during the decades of war and turmoil that followed the Soviet invasion in 1979.

Cricket boomed after the Taliban era as many Afghans returned home, despite the Islamist militants waging a bloody insurgency against US-led troops and the Kabul government.

The game is now played on any piece of open ground, ranging from scruffy city parks to rural roads, with boys often using discarded pieces of wood for bats and wickets.

"I can not ask for a better performance than this. They truly played like champions," said Nazir Ahmad, 27, who works as a tailor in Kabul. "I wish our team further success in the World Cup."

Afghanistan became an affiliate member of the International Cricket Council in 2001 and an associate member earlier this year.

Sport was rarely played under the Taliban. The football stadium in Kabul was a notorious venue for executions, stonings and mutilations before matches.

Comments
Topics mentioned in this article
Cricket World Cup 2015
Get the latest updates on ICC T20 Worldcup 2022 and CWG 2022 check out the Schedule, Live Score and Medals Tally. Like us on Facebook or follow us on Twitter for more sports updates. You can also download the NDTV Cricket app for Android or iOS.