Women's Hockey World Cup Highlights, India vs USA Hockey Match: Rani Rampal scored the equaliser for India in the 31st minute after Margaux Paolino of USA put her team in the lead in the 11th minute. 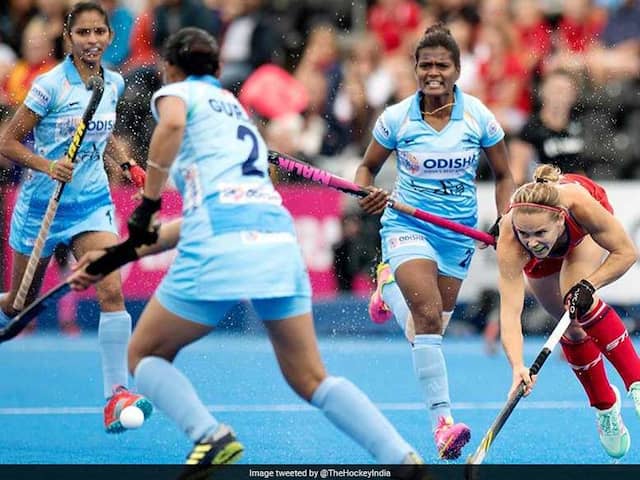 India drew 1-1 against world no.7 United States of America in their third and final Pool B match of the 2018 Women's Hockey World Cup at the Lee Valley Hockey & Tennis Centre, London. By virtue of this draw, they kept their hopes alive of entering the knock-out stages of the tournament. USA took the lead in the first quarter as Margaux Paolino scored the opening goal of the match in the 11th minute. India fought valiantly in the second quarter but were not able to find the back of the net. In the opening minute of the third quarter skipper Rani Rampal scored the equalizer for the Indian team through a penalty corner. Both teams tried hard to score in the remaining third and fourth quarter of the game but the Indian as well as American defenders (including the goalkeepers) kept the ball at bay. India are still at third position in the group table with 2 points, while USA are languishing at the bottom.

22:56 IST: USA down to 10 players as Ashley Hoffman shown a yellow card for an ugly tackle.

22:53 IST: Just under 5 minutes to go with both teams still level at 1-1. Just not happening at the moment for India. Even after multiple circle penetrations, India have not been able to net the ball.

22:47 IST: Udita with a powerful reverse shot inside USA circle but the ball goes over the net.

22:44 IST: MISSED! That was a brilliant diving save from goalkeeper Jackie Briggs.

22:37 IST: What a challenge that was from goalkeeper Savita. Brilliant diving save.

22:36 IST: Melissa Gonzalez given a green card by the umpire.

22:35 IST: Both teams looking for the lead but are struggling to penetrate in opposition's circle. USA 1-1 IND

22:25 IST: GOAL! Rani Rampal with a powerful strike and goalkeeper Jackie Briggs had no chance there. India equalises in the 31st minute. USA 1-1 IND

31' GOAL! India get back into this encounter with a goal by Captain @imranirampal!

22:24 IST: Penalty corner for India in the opening minute of the of the third quarter.

22:23 IST: Whistle and Rani Rampal gets the third quarter underway.

22:12 IST: Another penalty corner for USA. Kathleen Sharkey with a strong drag flick but goalkeeper Geeta saves it for India.

22:10 IST: Powerful flick from Vittese but the ball goes wide of the net. USA still lead India 1-0 with just under 90 seconds remaining in the second quarter.

22:09 IST: India lose their referral and USA get a penalty corner.

22:06 IST: Aggressive hockey from USA. They are dominating ball possession at the moment, looking for their second goal.

21:57 IST: Penalty corner given to India after video referral. Powerful strike from Gurjit but goal-keeper Jackie Briggs yet again clears the ball.

21:53 IST: First penalty corner for USA in the match but it's a miss as Indian defenders clear the ball with ease.

21:52 IST: Deepika given a green card in the opening minute of the second quarter.

21:49 IST: Another penalty corner for India but yet again cleared with ease by the American defence.

21:47 IST: India earn their second penalty corner but Jackie Briggs stops the ball with a brilliant diving save.

21:41 IST: GOAL! USA strikes in the 11th minute. Margaux Paolino nets the ball after brilliant display by the attackers in the Indian circle. USA 1-0 IND

11' USA GOAL! Third attempt does it as Margaux Paolino buries it into the back of the goal to give USA a 1-0 lead #HWC2018 pic.twitter.com/xR1EgGxkyy

21:33 IST: Bad news for India! Skipper Rani Rampal twists her ankle badly while attacking in the USA half, walks out.

21:31 IST: India ask for a referral in the opening minute of the game but the umpire denies it.

21:30 IST: Umpire blows the whistle and the first quarter begins.

21:25 IST: Both teams are at the centre along with the match officials for the national anthems. We are just minutes away from the start.

21:10 IST: Starting XI for both the team announced!

Here's how the Indian Women's Team will line-up for their final pool-stage game of the Vitality Hockey Women's World Cup London 2018 against USA. Watch LIVE at 9:30 PM (IST) on @StarSportsIndia 2/2HD, @hotstartweets and @ddsportschannel on 29th July.#IndiaKaGame #HWC2018 pic.twitter.com/SEf8kNr1fo

21:00 IST: We are just 30 minutes away from the third match of the day which is between India and USA.

20:45 IST: South Korea drew China 1-1 in the first game of the day while Netherlands romped Italy 12-1 in the second game.

20:40 IST: India are currently placed third behind Ireland and hosts England in the group table. Ireland have already qualified for the quarterfinals.

20:30 IST: Hello and welcome to the live updates of the Women's World Cup match between India and USA.

"The team's structure and planning is good which enabled us to create chances in the striking circle but not being able to convert these chances into goals cost us the match. We made 27 circle entries against Ireland while had made just 10 against England. Though playing against these two teams is very different from each other, it is frustrating that we could not convert a single goal from these chances (15 shots on goal) against Ireland. But at the same time I take this as a positive that we have the abilities to puncture any team's defence to create potential opportunities. When we play USA, the emphasis would certainly be on scoring from these opportunities created. We have to execute better and the girls are working for that," Marijne said.

Against Ireland, Indian defence looked strong as the opposition could only manage 10 circle entries. Sjoerd Marijne asserted that the defence is in good position but the team needs to be more precise in the attacking department. "Our defence will be one of our advantages against USA. The loss against Ireland has not affected the confidence of the team because we know that if we have created enough chances against Ireland while our defence has held strong, we can do the same against USA too, " Marijne added. USA, who are currently fourth in group B drew against England and lost 1-3 to Ireland. Both India and USA have one point each with India being ahead due to goal difference. To remain in contention for a quarterfinal berth, India need a win or a draw from Sunday's game. "It is a must-win match for us on Sunday and there is no doubt that," concluded Marijne.