Shubhankar Sharma carded one-under 70 for a total of one-under 141 to make the cut on the line. 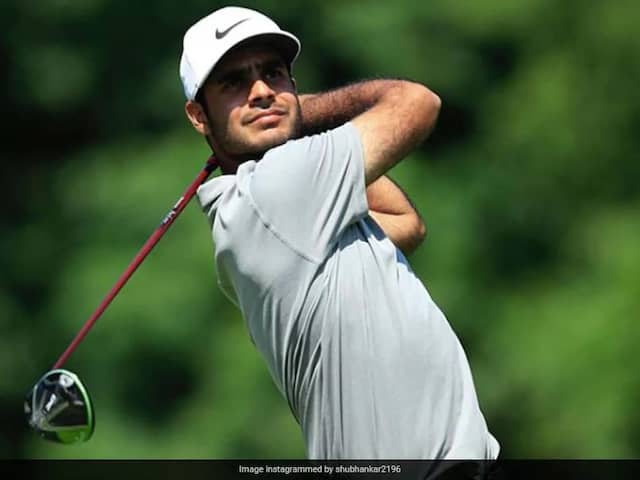 A birdie on ninth set the tone for Shubhankar Sharma as he got three in a row on ninth, 10th and 11th.© Instagram

India's ace golfer Shubhankar Sharma spent almost three hours on a knife-edge before getting to know he had made the cut at the Celtic Classic here. Sharma, who had missed the cut in his last two outings on the ongoing UK Swing, carded one-under 70 for a total of one-under 141 to make the cut on the line. He is tied-65th. The Indian, one-over through six holes for the second round, had a good run of three birdies in a row around the turn from ninth to 11th to get to two-under for the tournament.

A dropped shot on 15th meant he was on the bubble. He saved pars on the closing stretch. Sharma said, "The conditions were not too easy early on but I thought the cut would be one-under and I am glad I was right". "Oh, yes, it could have been a disappointment if any of the guys (at one-under) and playing behind me had birdied towards the end. But I suppose everyone was being careful".

He added, "It was somewhat windy and drizzling on the front nine, but it was better as we were halfway through the round".

With a laugh, he admitted, "It was more tense waiting for others to finish than when I was playing. Now that I am in for the weekend, the focus is on getting a couple of good low rounds. There are birdies to be made and I have to go and get them".

Sharma began well with a birdie on second, but bogeys on fourth and sixth meant he needed a solid back nine. A birdie on ninth set the tone as he reeled off three in a row on ninth, 10th and 11th.

A dropped shot on 15th made things tense, but he survived it. A late birdie from any of the three players, including last week's winner Andy Sullivan, Alexander Bjork or Adri Arnaus could have knocked out Sharma.

Meanwhile, Englishman Sam Horsfield, 23, who won his maiden European Tour title at the Hero Open during the second leg of the six-week UK Swing, moved into contention with the help of four successive birdies around the turn.

It could have been even better but for a late triple bogey. Gavin Green of Malaysia, who missed the cut last week, was out of the cut line after 15. He birdied the 16th and closed with an eagle to get to three-under and stay on.

Horsfield held a three-shot lead over Callum Shinkwin and Andrew Johnston but a triple-bogey six at the 17th saw him drop from 12 under and one clear of the duo.

Johnston, who opened the day with a triple-bogey seven on first had another bogey on fifth to go four-over. After that, he had seven birdies and an eagle-two on Par-4 15th for five-under 66 and is now in contention at 9-under.

Comments
Topics mentioned in this article
Andy Sullivan Andrew Johnston Golf
Get the latest updates on IPL 2020, check out the IPL Schedule for 2020 and Indian Premier League (IPL) Cricket live score . Like us on Facebook or follow us on Twitter for more sports updates. You can also download the NDTV Cricket app for Android or iOS.