After a 4 and 3 win over Tiger Woods and Patrick Reed in the morning fourballs, Tommy Fleetwood and Francesco Molinari thumped the 14-time major champion and Bryson DeChambeau 5 and 4 in the foursomes. 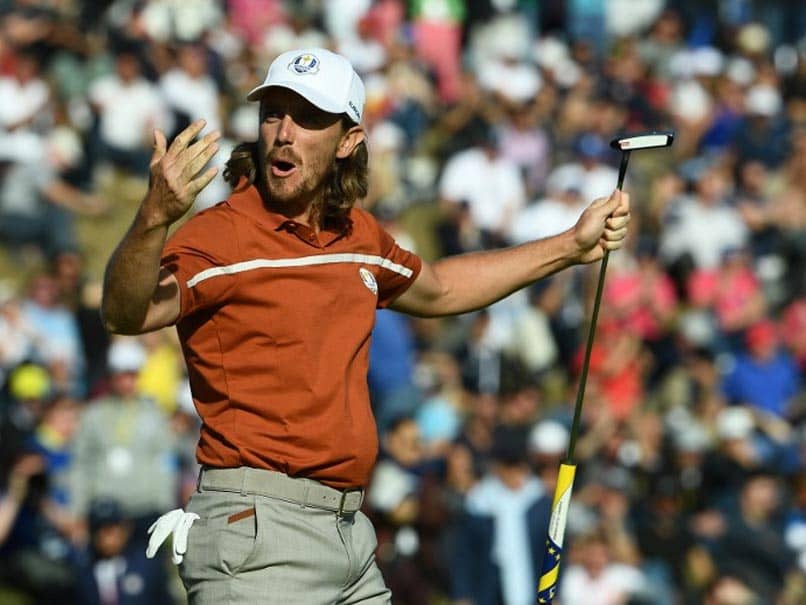 Tommy Fleetwood and Francesco Molinari gave the hosts a 10-6 lead over the United States.© AFP

Tommy Fleetwood and Francesco Molinari propelled Europe into a commanding position with a rare sweep of their four pairs matches to give the hosts a 10-6 lead over the United States going into the final day of the Ryder Cup. Ryder Cup rookie Fleetwood and Molinari became the first European couple to claim four points from their opening four matches, inflicting a pair of defeats on Tiger Woods in Saturday's fourballs and foursomes at Le Golf National. They were just the second pairing to go 4-0 in team matches since 1979, joining American duo Larry Nelson and Lanny Wadkins who achieved the feat at The Greenbrier.

After a 4 and 3 win over Woods and a misfiring Patrick Reed in the morning fourballs, Fleetwood and Molinari thumped the 14-time major champion and Bryson DeChambeau 5 and 4 in the foursomes.

"We were really, really good this afternoon," said Fleetwood. "We played really solid, we played really well. But yeah, about the piece of history together, it's very special."

British Open champion Molinari, winless in two previous Ryder Cup appearances -- in 2010 and 2012, warned the job is not yet finished for Thomas Bjorn's side ahead of Sunday's 12 singles matches.

"We came here to do a job, and it wasn't to go in the records books or anything like that, it's about the team, it's about getting to 14 1/2," said the Italian.

No European player has scored five points from five in Ryder Cup history, with US trio Arnold Palmer, Gardiner Dickinson (both in 1969) and Nelson (1979) the only golfers to accomplish it.

Woods has endured a miserable return to Ryder Cup play after a six-year absence, losing all three of his matches in France to drop his record in pairs events to 9 and 19 with one draw.

"Everything feels pretty good. Just pretty pissed off, the fact that I lost three matches, and didn't feel like I played poorly," said Woods, on the winning just once in seven Ryder Cups.

"That's the frustrating thing about match play. We can play well and nothing can happen."

Eight in a row

Johnson and Koepka pulled to within one on the 15th, but Stenson displayed nerves of steel to sink vital putts at the 16th and 17th -- the latter sealing the win as Koepka's ensuing effort rolled wide.

The US grabbed a share of the points in the afternoon session, with two-time Masters winner Bubba Watson and former US Open champion Webb Simpson leading from start to finish in a 3 and 2 victory over Sergio Garcia and Alex Noren.

The Americans scrambled to halve the par-3 second despite twice finding the water, as Garcia and Noren also combined for a triple bogey.

Jordan Spieth and Justin Thomas have picked up half the Americans' points in France, beating Rory McIlroy and Ian Poulter 4 and 3 in the foursomes after triumphing in the morning fourballs.

Their 2 and 1 victory over Poulter and Jon Rahm in the fourballs halted a run of eight straight match wins for Europe, which equalled the record set by the US team in 1967 in an era before the inclusion of players from continental Europe.

The US will need to produce a monumental comeback, similar to that of Brookline in 1999 where they rallied from 10-6 down entering the last day to win, if they are to retain the trophy.

Meanwhile Garcia, who earlier teamed up with McIlroy to beat Koepka and Tony Finau in the fourballs, became the second highest points scorer in Ryder Cup history with 24.5, but the Spaniard will have to wait until Sunday to have a chance to surpass record-holder Nick Faldo (25).

Comments
Topics mentioned in this article
Golf Tiger Woods Tommy Fleetwood Francesco Molinari
Get the latest updates on India vs Australia Series, check out the India vs Australia Schedule for 2020-21 and Ind vs Aus live score . Like us on Facebook or follow us on Twitter for more sports updates. You can also download the NDTV Cricket app for Android or iOS.