Lewis Hamilton dominated qualifying for the Turkish Grand Prix to minimise the damage from the 10-place grid penalty Mercedes decided to incur by changing his engine ahead of the race. 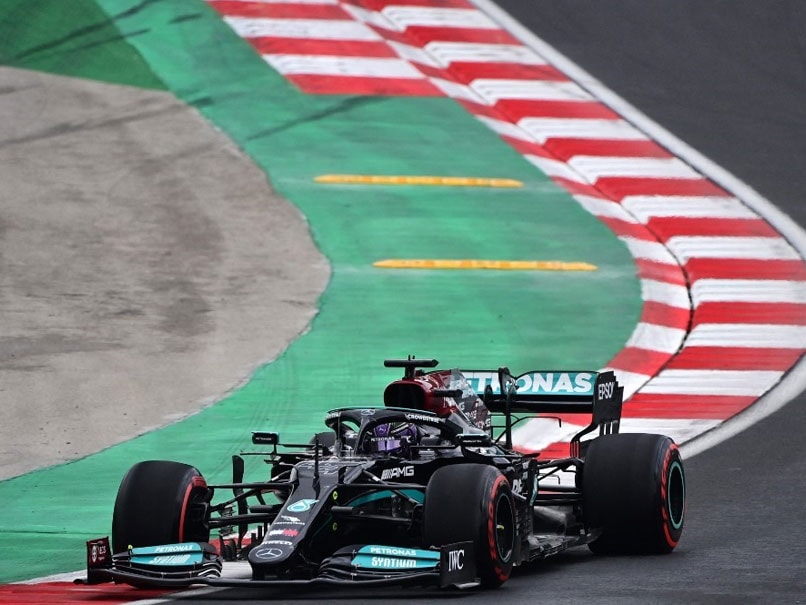 Mercedes' Lewis Hamilton drives during the qualifying session at the Intercity Istanbul Park in Istanbul.© AFP

Lewis Hamilton found a silver lining on Saturday, dominating qualifying for the Turkish Grand Prix to minimise the damage from the 10-place grid penalty Mercedes decided to incur by changing his engine ahead of the race. At a race where qualifying was red flagged last season and after morning practice was also interrupted by a red flag as drivers spun on a wet track, qualifying started under a cloud as team radar predicted that rain would start to fall on parts of course in less than three minutes. Yet, the rain held off and, after a panicky start, Hamilton improved his time in each of the three qualifying phases. After breaking the 16-year-old track record in practice on Friday broke it again in each of the three qualifying sessions.

"The track's completely different," said Hamilton. "The track is absolutely awsome, with the grip level it gives us now."

Frenchmen Chares Leclerc in a Ferrari, and Pierre Gasly in an Alpha Tauri will start on the second row.

Hamilton leads Verstappen by two points in the standings and will start nine places behind the Dutchman on Sunday even though the Mercedes has been faster all weekend.

"I'll give it everything," said Hamilton. "Tomorrow is going to be difficult to move up. Hopefully we can give the fans a good race."

Bottas was also happy and insisted that on Sunday "I will race my own race".

"As a team result as we really planned," he said. "Hamilton with the minimum penalty and me on pole."

Mercedes principal Toto Wolff was not sure if his petrol tank was half full or half empty.

"You need to look at the positives that the car is very quick and we can start from pole," he said.

"On the negative side we could have had a front-row lockout," he added.

He said it would be "very difficult" for Hamilton to move up but added, "the Red Bulls haven't been so competitive this weekend."

Verstappen said he had been having problems since the start of the weekend but the team had made adjustments between Friday and Saturday.

"Third was the maximum today," he said. "I will try to pick up as many points as we can tomorrow."

Some drivers starting ahead of Hamilton admitted they will be looking over their shoulders.

"He'll be passed me in a couple of laps," said Lando Norris who will start seventh in his McLaren.

Gasly said he'd try to make his Alpha Tauri as wide as possible. "It's pretty much what I try every race" adding he held off Bottas for 30 laps in Sochi.

"We know Lewis is going to come from the back tomorrow," Gasly said.

Before the start of qualifying, drivers queued up to beat the expected downpour and put in a quick lap, but with the track still damp from earlier rain and in cool conditions that meant tyres took longer to warm up, many struggled to keep their cars on course.

Hamilton was particularly eager, barging past several other cars as they approached the start.

The Briton exceeded track limits on the first corner. Verstappen was among several drivers who soon spun.

"Getting the temperature in the tyres for the first lap wasn't easy," Hamilton said.

But the rain held off and as the track dried, Hamilton posted the fastest time in the first qualifying session at 1min 24.585sec.

At the other end of the field, Mick Schumacher reached the second qualifying session for the first time in his career. The German eventually qualified 14th.

The Haas driver pulled out a fast lap right at the end of the 20-minute first session to push McLaren's Daniel Ricciardo, the winner in Italy last month, into the bottom five and out of qualifying.

Lewis Hamilton Turkish Grand Prix Formula 1
Get the latest updates on T20 World Cup, check out the T20 World Cup Schedule and Live Score . Like us on Facebook or follow us on Twitter for more sports updates. You can also download the NDTV Cricket app for Android or iOS.