Nico Hulkenberg was involved in a fiery crash at the Abu Dhabi GP after a collision with Romain Grosjean. 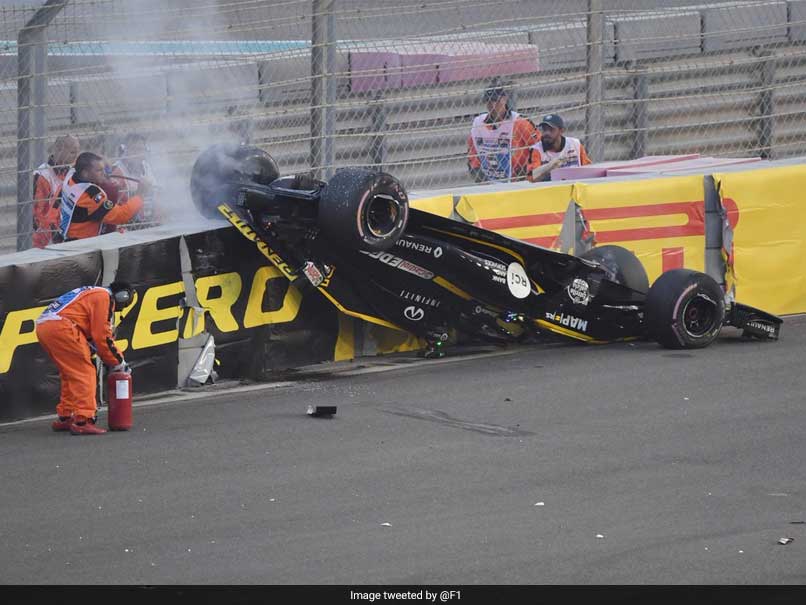 Nico Hulkenberg was able to walk away from the horrifying crash and talk to marshals and medical staff.© Twitter

Renault driver Nico Hulkenberg was left hanging upside down for three minutes in his flaming car after suffering a horrifying opening-lap crash at the Abu Dhabi Grand Prix on Sunday. Fortunately for Formula One fans, the German driver escaped unhurt after a collision with Romain Grosjean sent him barrel rolling towards the tyre barriers. After the coming together, Hulkenberg's car was catapulted into the air and rolled at high speed into the barriers where, on impact, flames burst from the rear of the car.

He walked away unscathed from his big collision with Romain Grosjean#AbuDhabiGP#F1 pic.twitter.com/bAVm0LRgtQ

He was soon helped by marshals who had to manually roll the car off the barriers before assisting him in climbing out.

Hulkenberg was able to walk away and talk to marshals and medical staff.

Grosjean asked his Haas team if Hulkenberg was ok and, after being told he was, he added that he had nowhere to go when they crashed.

The race stewards quickly announced they were taking no action and treated the crash as a racing incident.

In the race, new five-time Formula One champion Lewis Hamilton kept his cool in an incident-filled final Grand Prix of the season to claim his 11th win of the campaign in Abu Dhabi.

The 33-year-old Briton, who started from his 83rd pole position, came home 2.5 seconds ahead of his main title rival, four-time champion Sebastian Vettel of Ferrari, on the day Fernando Alonso bade farewell to F1.

Lewis Hamilton Abu Dhabi Grand Prix
Get the latest updates on Olympics 2020, Olympics 2020 Medal Tally, Live Cricket Score . Like us on Facebook or follow us on Twitter for more sports updates. You can also download the NDTV Cricket app for Android or iOS.