Eight years ago, Robert Kubica had suffered a partially severed right arm, among many other injuries, in a rally crash. 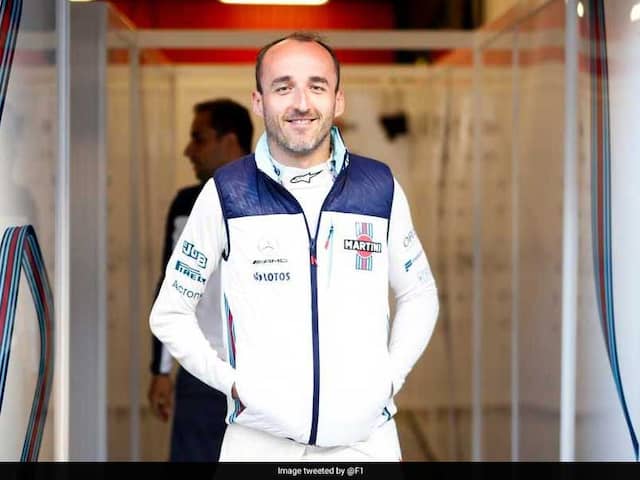 Polish driver Robert Kubica will return to Formula One for Williams in 2019, eight years after he was seriously injured in a rally crash, the team said Thursday. Kubica, who has not taken part in a Grand Prix since his right arm was partially severed in the accident in 2011, joins Englishman George Russell at the British team in 2019. The 33-year-old Polish driver has done several practice sessions for Williams and his return to the sport was announced in Abu Dhabi, the venue of his last race back in 2010.

Kubica said, "Firstly, I would like to thank everyone who has helped me during what was a difficult period of my life over these last few years.

CONFIRMED: Robert Kubica will race for @WilliamsRacing in 2019!

He will make his return more than eight years since his last #F1 race, and will partner @GeorgeRussell63 for next year's campaign pic.twitter.com/frlGNr4XAg

"It will not be easy, but, with hard work and dedication, both George and myself will work together to try and help the team get in better shape to move further up the grid."

Kubica's right arm was partially severed in the rally crash in Italy in February 2011 which brought a dramatic halt to his F1 career that had already produced one Grand Prix victory.

Kubica acknowledged that he was joining Williams after the team had one of the worst seasons in their history.

"It will not be easy, but, with hard work and dedication, both George and myself will work together to try and help the team get in better shape to move further up the grid," he said.

Kubica's dramatic crash in Italy in 2011 brought a dramatic halt to his F1 career, but he had already shown enough talent to win a race and mark himself out as a huge talent.

He fought his way back to fitness and was on the verge of a return with Williams last season. But after post-season tests in Abu Dhabi, the team decided to take on Sergey Sirotkin instead. Sirotkin has won just one point in the season that ends on Sunday.

However, Kubica was signed to the team as a reserve driver and has been a constant presence at races this year.

Team principal Claire Williams said the team had been "immensely impressed" with Kubica and praised his "strength of character and tenacity to return".

"During this season his commitment to the team and the work he has put in behind the scenes has been unwavering," she added.

Kubica has explained in the past that the injury to his arm has forced him to adapt the way he drives.

"After my accident, I discovered that to do a roundabout in the road car, you don't have to grab the steering wheel, you can use friction to turn," he said

"F1 is not a road car, but I have been also in school where they give you a bird in the hand and you have to hold it (so) that it doesn't fly away but you cannot hold it too much that it gets scared.

"This is the way you have to hold the steering wheel."

Comments
Topics mentioned in this article
Robert Kubica Formula 1
Get the latest Cricket news, check out the India cricket schedule, Cricket live score . Like us on Facebook or follow us on Twitter for more sports updates. You can also download the NDTV Cricket app for Android or iOS.