Lewis Hamilton's win came after a race that began with a horrific opening lap crash from which Nico Hulkenberg escaped unhurt. 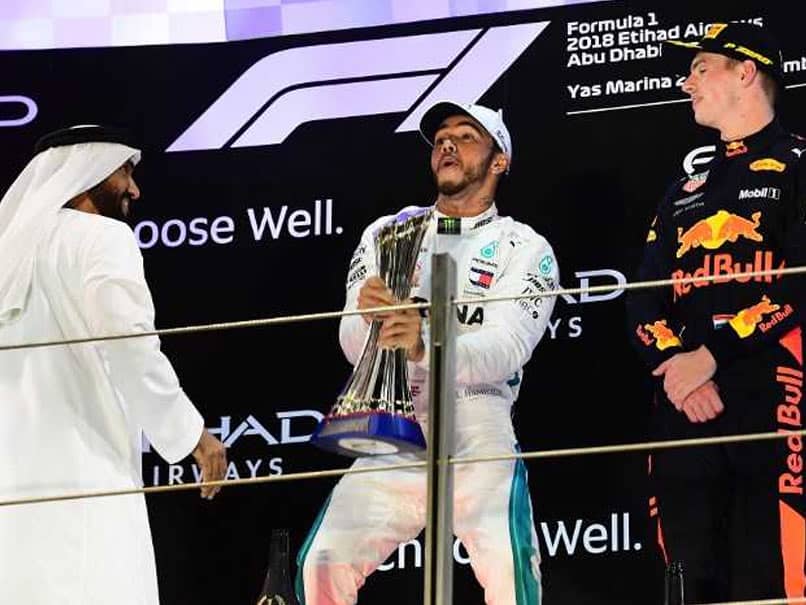 New five-time Formula One champion Lewis Hamilton kept his cool in an incident-filled final Grand Prix of the season on Sunday to claim his 11th win of the campaign in Abu Dhabi. The 33-year-old Briton, who started from his 83rd pole position, came home 2.5 seconds ahead of his main title rival, four-time champion Sebastian Vettel of Ferrari, on the day Fernando Alonso bade farewell to F1. Retirement-bound Alonso finished just outside the points positions for McLaren as the two-time champion taking 11th in his 311th and final GP.

Hamilton's win came after a race that began with a horrific opening lap crash from which Nico Hulkenberg escaped unhurt despite his Renault car catching ablaze and barrel-rolling into the trackside barriers.

"He deserves to be champion," Vettel said. "It's been a tough year and I tried until the last lap."

Dutchman Max Verstappen finished nearly 13 seconds back in third, ahead of his team-mate Daniel Ricciardo -- who is moving to Renault after the 100th race for Red Bull -- and Valtteri Bottas in the second Mercedes.

Carlos Sainz came home sixth for Renault ahead of Ferrari-bound Charles Leclerc of Sauber, Sergio Perez of Force India, Romain Grosjean, who had tangled with Hulkenberg on the opening lap, and his Haas team-mate Kevin Magnussen.

On a hot evening at the Yas Marina Circuit, after a series of farewells and pre-race theatre that included flag-waving Hollywood star Will Smith, the engines out-roared the hype as Hamilton made a perfect start from his 11th pole of the season to draw clear of Bottas.

Drama then intervened when Hulkenberg tangled with Grosjean and was sent into an airborne roll that saw him crash violently into the barriers as flames erupted.

He was unhurt and climbed out after his car was manually rolled back by the marshals, who extinguished the blaze.

The race was red-flagged as a Safety Car was deployed, re-starting after five laps with Hamilton resuming as a leader.

"I'm very sorry for him (Hulkenberg), but there was nowhere I could go," said Grosjean.

On resumption, Hamilton pulled 1.2 seconds clear while Verstappen fought back after falling to 10th. His progress included a passing move at the hairpin on Esteban Ocon, the Frenchman who had collided with him in Brazil -- and been shoved and threatened afterwards.

Ocon responded by regaining his place on the straight and this was repeated before, at the third attempt, the Dutchman made it stick shortly before Kimi Raikkonen, in his farewell outing for Ferrari, lost power and retired, parking on the pit straight.

This triggered a Virtual Safety Car intervention that saw Hamilton, on lap seven, pit to change to harder tyres.

Bottas took the lead and Hamilton rejoined in fifth, the racing resuming on lap nine, and after a series of pit visits from the leading drivers, Hamilton eventually retook first place.

With 20 laps remaining, it was clear Bottas and Mercedes were struggling with tyre-wear and Vettel took advantage, sweeping past for second behind Hamilton to set up a dramatic finale.

Bottas briefly held off an attack from Verstappen on lap 38 but could not resist the Dutchman as they banged wheels as he passed at Turn 11, before then falling behind Ricciardo.

All this left Hamilton leading, on worn tyres, six seconds ahead of Vettel, Verstappen and Ricciardo. Bottas made a final charge after pitting for softer tyres, but could not make a dent.