Lewis Hamilton said it would be difficult for him to give up racing and that he feels as young as the newer racers. 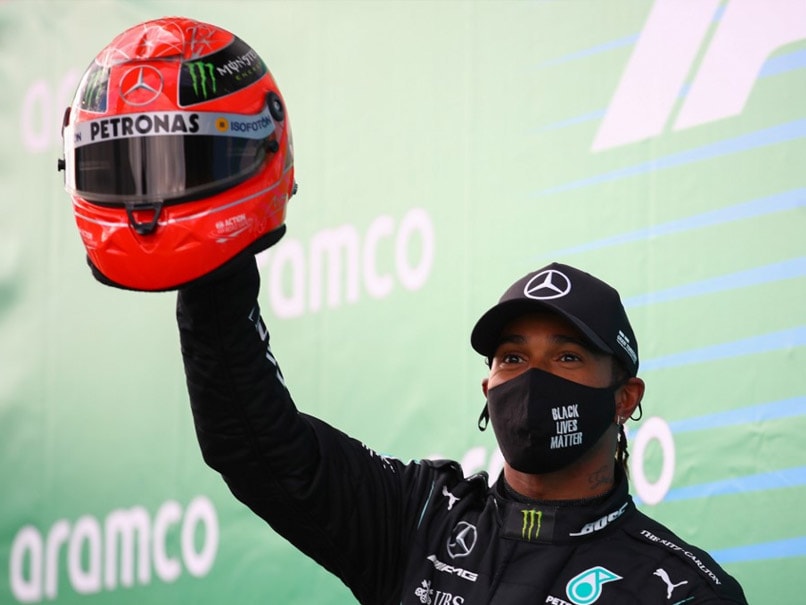 Lewis Hamilton issued a clear warning to his rivals after his record-equalling 91st career win at the Eifel Grand Prix when he said he wants to keep chasing records until he turns grey. The runaway series leader and six-time world champion equalled Michael Schumacher's total of wins and moved closer to levelling him on seven drivers' titles with his victory at the Nurburgring on Sunday. It was his first win at the circuit for Mercedes and the team's first triumph at the historic venue since Juan-Manuel Fangio's victory in 1954.

"Of course, I can set goals and I will continue to charge on and see what is possible," said Hamilton.

"I love the sport - the smell of it, the whole aura and atmosphere it creates - and it is going to be difficult to let it go.

"While I am older now than these guys, I feel as young as them in spirit. That will change when I start seeking grey hairs, but for now I am good."

Hamilton achieved his landmark win after 260 races while Schumacher, whose 21-year-old racer son Mick gave him one of his father's helmets to mark his achievement, raced in 246.

Hamilton, who grew up watching Schumacher win races during his and Ferrari's domination, can move one clear of that total if he wins the inaugural Formula One race at the Portimao circuit in Portugal on October 25.

"I could never fathom equalling his records and it is beyond my wildest dreams to be here now - I feel humbled by the moment," said Hamilton.

"Michael is, and always will be, a legend of the sport."

Lewis Hamilton
Get the latest updates on SA vs IND 2021-22, check out the Schedule and Live Score . Like us on Facebook or follow us on Twitter for more sports updates. You can also download the NDTV Cricket app for Android or iOS.