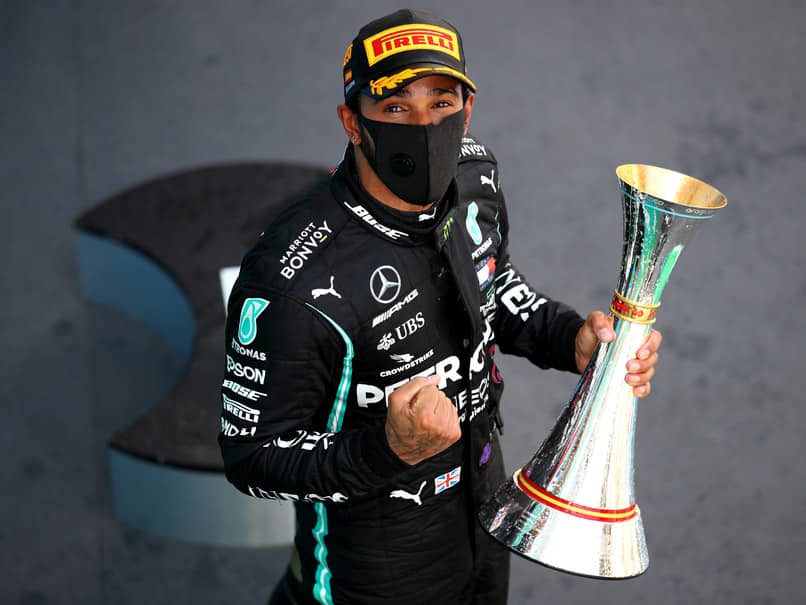 Lewis Hamilton extended his lead in the drivers title race to 37 points ahead of Max Verstappen.© AFP

Lewis Hamilton claimed his 88th Formula One career victory and, with it, an outright record 156th podium finish on Sunday when he drove his Mercedes to a masterful victory in the Spanish Grand Prix. It was the world championship leader and six-time champion's fifth win in Spain and his fourth in consecutive years, extending his record run of finishes in the points to 39. Hamilton came home 24 seconds ahead of nearest title race rival Max Verstappen of Red Bull who finished 20 seconds ahead of Valtteri Bottas in the second Mercedes.

Hamilton had shared a record 155 podium finishes with Michael Schumacher whose other records for championships and wins are in the Briton's sights this year.

His victory increased his lead in the drivers title race to 37 points ahead of Verstappen.

Sergio Perez, back in his Racing Point after missing two races with coronavirus, was fourth ahead of his team-mate Lance Stroll and Carlos Sainz of McLaren.

"Wow, I was in another zone then," said Hamilton.

"I didn't even know it was the fastest lap. Thank you everyone. I was just in a daze out there - it was good."

Verstappen was satisfied with his result.

"To split them was the best we could do today," said the Dutchman who won the 70th Anniversary Grand Prix at Silverstone last week.

"We didn't have the speed of Lewis and it was important to get past Valtteri at the start."

Bottas said: "I lost a place at the start and that was it - it's so difficult to pass around here."

Four-time champion Sebastian Vettel, in his final season with Ferrari and linked with a move to Aston Martin next year, finished seventh ahead of Alex Albon in the second Red Bull, Pierre Gasly of Alpha Tauri and Lando Norris who was 10th in the second McLaren.

On another hot afternoon at the Circuit de Catalunya, with a track temperature of 50 degrees Celsius and the air at 31, Hamilton made a clean start from his 92nd pole position, but behind him Bottas made sluggish progress from second.

Both Verstappen and Stroll took advantage on the 'drag race' down to the first corner, pushing the Finn down to fourth.

All of them were aware of the threat of serious tyre degradation in the conditions, a hazard that persuaded Hamilton to control the lead pace with caution.

Bottas was soon back on pace, passing Stroll into Turn One and then launching his chase after Hamilton and Verstappen.

The champion was soon clear of the Dutchman by 1.5 seconds, but not surging clear as he backed up Verstappen towards the Finn.

By lap 12, he was lapping faster and reeling off fastest laps, opening a gap of 1.7, which he increased to four seconds by lap 15 while Bottas, third, closed to within two seconds of Verstappen.

All of the top ten drivers had started on softs, the rest on mediums. This meant pit-stops were inevitable with tyre-wear and strategy sure to be critical factors.

Albon was the first to blink, taking a set of hard tyres for his Red Bull as the team sought the means for him to make progress and opted, in vain, for a one-stop race. He returned for mediums on lap 43.

By lap 20, a frustrated Verstappen was grumbling about his soft rear tyres.

This move enabled Bottas to regain second, ten seconds behind his team-mate with Verstappen rejoining third, adrift by nearly 30 seconds - but on lap 24 Mercedes 'double-stacked' their men for mediums in a slower move.

Hamilton was stationary for 4.3 seconds and Bottas for 3.1, a delay that allowed Verstappen to regain second, 4.3 down on the leader.

Behind the leaders, the mixed strategies ensured plenty of positional battles including scraps between Lando Norris of McLaren and Ferrari's Charles Leclerc for 10th and the two Racing Points for fifth.

Leclerc's hopes ended on lap 38 when his engine cut out and he spun at the chicane. He re-joined in 20th before pitting and retiring as black thunderclouds loomed.

Red Bull Spanish Grand Prix Catalunya Formula 1
Get the latest updates on India vs England Series, India vs England , live score and IPL 2021 Auction . Like us on Facebook or follow us on Twitter for more sports updates. You can also download the NDTV Cricket app for Android or iOS.