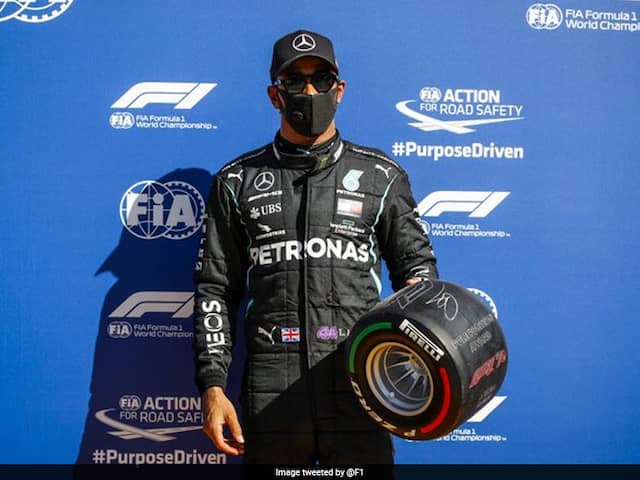 Hamilton topped Q1 and continued to do the same in Q2 lapping in 1:19.092 to lead Bottas by three-tenths.© Twitter

Lewis Hamilton claimed pole position with a new lap record at Monza for Sunday's Italian Grand Prix with Valtteri Bottas taking second place in qualifying for another Mercedes front row lock-out. McLaren's Carlos Sainz posted the third fastest time and is joined on the second row by Sergio Perez for Racing Point. The session proved another humbling experience for Ferrari with Sebastian Vettel going out in Q1 and Charles Leclerc, who won at the circuit last year, in Q2. This means no Ferrari inside the top 10 at Monza for the first time since 1984. Hamilton clocked a fastest lap in one minute and 18.887 seconds to beat Bottas by 0.069 seconds. In pure speed, Hamilton's track lap record performance produced an unconfirmed fastest lap in F1 history.

It was Hamilton's record-increasing 94th career pole position, his sixth in seven races and his seventh in Italy. It also extended Mercedes run to eight consecutive pole positions this season.

"It wasn't too bad," said Hamilton, with a hint of a smile.

"It was a fantastic performance from the team -- in terms of timing, when they put us out on the track," said Hamilton, referring to Mercedes' avoidance of the jostling mass of cars seeking a slip-streaming tow from each other.

"It was not the easiest as you saw how close it is between us all so it demanded a really clean lap - and I felt I got that, so I am very happy."

Max Verstappen was fifth for Red Bull, Lando Norris qualified sixth in the second McLaren ahead of Daniel Ricciardo of Renault, Lance Stroll in the second Racing Point, Alex Albon in the second Red Bull and Pierre Gasly of Alpha Tauri.

Bottas also broke the track record twice and said: "It was really close as I expected. I am not sure about the tow - I didn't have any until the end and I kind of felt the benefit, but then on the final lap I was on my own again.

In perfect conditions, the air temperature was 28 degrees and the track 46 as Q1 began under blue skies at the Autodromo Nazionale.

Eight of the field were fresh back from a summons to the stewards following final practice, which had seen Hamilton forced to swerve onto the grass to avoid a collision with one of two slow cars running side by side on the approach to the Parabolica.

The introduction of a mandatory minimum lap time appeared to have had little effect and this continued in qualifying as, after much jostling and blocking, Ferrari's dismal run was extended with Vettel's early elimination.

The German driver was trapped in a chaotic train of jostling cars which, eventually left him helpless and frustrated in P17, unable to clock an improved flying lap.

"What a mess," said Vettel on team radio.

Vettel was eliminated from Q1 for the first time since his home German Grand Prix last year.

Also going out were the Williams pairing of George Russell and rookie Nicholas Latifi.

The messy end to Q1 thus consigned team founder Frank Williams and his daughter Claire, the deputy team boss, to seeing their cars start at the back of the grid in the final race before the Williams family breaks all ties with F1.

Hamilton topped Q1 and continued to do the same in Q2 lapping in 1:19.092 to lead Bottas by three-tenths, the two Mercedes working for each other in a demonstration of synchronised slip-streaming that kept them out of trouble.

As they did this, the stewards ruled that no further action was to be taken for the earlier fracas.

"It is impossible to determine that any driver was wholly or predominantly to blame," the stewards ruled of Hamilton's near miss.

A messy end to Q2 saw Leclerc out as the two Mercedes men sealed the front row in the top 10 shoot-out.

Lewis Hamilton Italian Grand Prix Formula 1
Get the latest updates on IPL 2020, check out the IPL Schedule for 2020 and Indian Premier League (IPL) Cricket live score . Like us on Facebook or follow us on Twitter for more sports updates. You can also download the NDTV Cricket app for Android or iOS.