Formula One: Valtteri Bottas Vows Never To Give Up, But Admits He Needs A Miracle

Valtteri Bottas, who retired on lap 19 of Eifel Grand Prix on Sunday, is 69 points behind Mercedes teammate Lewis Hamilton. 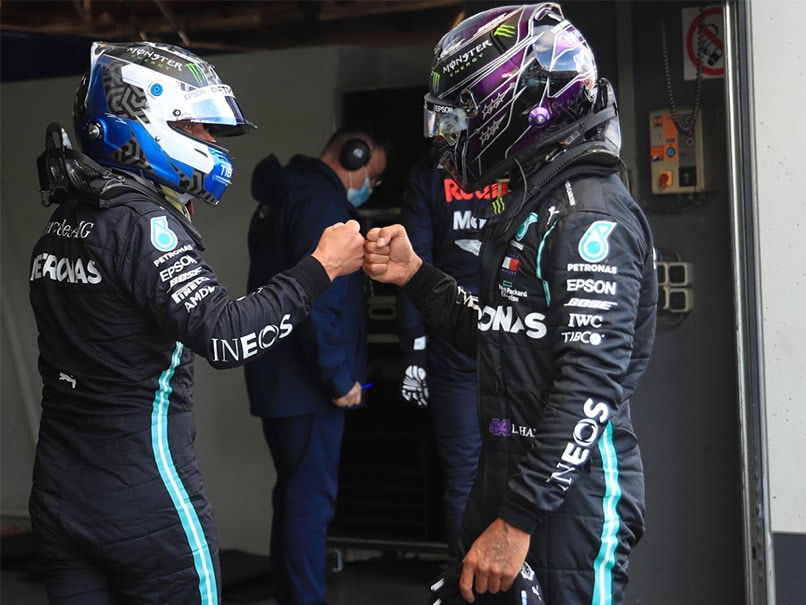 Valtteri Bottas admitted he needs a miracle to stop Lewis Hamilton claiming a record-equalling seventh drivers' world title, but said he intends to battle on at every race and has no intention of conceding defeat. The Mercedes driver, who was forced to retire on lap 19 of Sunday's Eifel Grand Prix after suffering a power failure, is now 69 points behind his team-mate after the six-time champion equalled Michael Schumacher's record 91 wins. It was Hamilton's seventh win in 11 races this season and, remarkably, extended his record run of consecutive finishes in the points to 44, a statistic that will probably cause more dismay for the Finn.

"I understand the gap to Lewis is now pretty big in the points," he said, with characteristic understatement.

"So, I would definitively need a miracle, but, as always, there's no point in giving up.

"I have to keep the bar high for me and keep trying… I think that's the best mind-set -- there's no point now to non-stop calculate the points for Lewis because it's quite a big gap.

"I just have to set the target for each weekend and then do everything I can for that. So, for me, the mind-set is to never give up. It's still with me so -- no chance to get out of it. Obviously, in a couple of months, we'll be a lot wiser about how the season pans out."

With six races remaining, starting in Portugal in two weeks' time, Hamilton has such a luxurious cushion that he is only likely to let a seventh title slip if he has at least three non-finishes – a prospect that his amazing consistency makes unlikely.

Having won in Russia, Bottas arrived at the Nurburgring in confident mood and claimed pole position. He fought off an attack from Hamilton at the race start and appeared to be in control until a rainstorm led to him locking up at Turn One on lap 13.

That gifted Hamilton the lead and, ultimately, the victory that was marked by Michael Schumacher's son Mick giving him one of his father's race helmets to mark the special occasion.

"It's disappointing, but it's one of these things you cannot do anything about," said Bottas.

"I knew there was still all to play for even after that lock up in the drizzle, but then came the engine thing and I couldn't believe it."

While Bottas retired to lick his wounds, Hamilton was given a glimpse of the future as Max Verstappen took second for Red Bull, keeping pressure on the leader and stealing fastest lap.

Daniel Ricciardo finished third for Renault to claim his first podium since 2018 and the team's first since 2011.

Valtteri Bottas
Get the latest updates on SA vs IND 2021-22, check out the Schedule and Live Score . Like us on Facebook or follow us on Twitter for more sports updates. You can also download the NDTV Cricket app for Android or iOS.